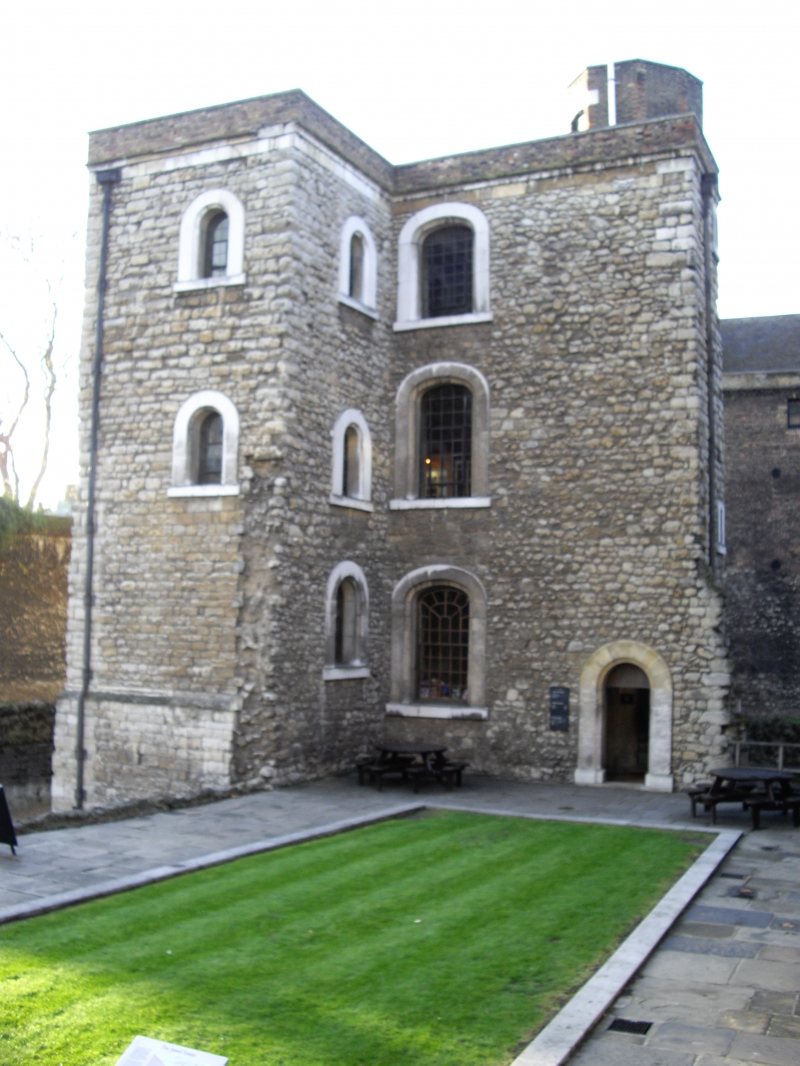 The monument includes the Jewel Tower of the medieval Palace of Westminster surviving as upstanding stone remains, earthworks and below-ground archaeological remains. It is situated on the south-west corner of Old Palace Yard, east of the precinct wall of Westminster Abbey and Westminster School, in the City of Westminster.

The Jewel Tower was built in the mid 14th century to house the King’s Privy Wardrobe, the department of the royal household, which looked after his private wealth and jewels. It is an L-shaped stone tower, three storeys high, with a polygonal stair turret pierced by narrow loopholes on the north side. The Tower originally occupied the south-west corner of the Palace. It is faced in coursed rubble masonry, principally of Kentish ragstone. The window and door surrounds are of Portland stone and date to the early 18th century, when the Tower was repaired. The east side, the entrance to the Tower, has a semi-circular arched doorway and tier of three windows with elliptical arched heads. The south-east wing includes small arched windows, remains of a garderobe chute, and a chamfer moulding above the plinth, which is carried around to the south. The south side features an irregular fenestration of small round-arched windows. The rear (west side) has a single first floor window and two second floor windows, one of which is now blocked. The Tower has a low-pitched roof concealed behind a plain parapet. The ground floor interior includes two-bays of tierceron vaulting with fine carved corbels and bosses. In the north wall are the remains of a fire place, now blocked and concealed behind a display unit. The first floor has two bays of mid 18th century vaulting and a brick partition with an early 17th century iron door separating it from the south-east wing. The second floor originally had an inner and outer door, indicating that it housed the most precious valuables. Only the 14th century inner door survives, which is cross-framed and heavily studded. The south-east wing is again separated off from the main block by a brick partition with an early 18th century gothic pointed doorcase. The roof structure includes two 14th century beams but is otherwise a 20th century imitation.

The medieval Palace of Westminster formed a roughly rectangular enclosure on the west bank of the River Thames. The northern part was the outer or Great Palace, centred on Westminster Hall, and the southern part was occupied by the inner or Privy Palace. The Jewel Tower is the only surviving building of the Privy Palace, which was largely destroyed by fire in 1512. It was built in 1365-6, almost certainly to the design of the royal mason Henry Yevele, as a secure store and administrative office. In 1621, it was taken over by the Parliament Office and remained in use as a record office for the House of Lords until 1864. In 1716-19, it was repaired and altered, probably to the design of Nicholas Hawksmoor. Between 1869 and 1938, it was occupied by the Weights and Measures Office. After the Second World War, it was taken into the care of the Ministry of Works as a historic monument.

The area in the immediate vicinity of the Jewel Tower includes the remains of a moat, supported by a revetment wall, which enclosed Westminster Palace. In 1996, the footings of a massive masonry wall, running east-west and underlying the Tower, were identified during an archaeological watching brief. It may be part of an earlier palace wall, perhaps from the reign of William II Rufus. The archaeological and environmental remains, north of Abingdon Street Gardens, are included in the scheduling.

The upstanding remains of the Jewel Tower are Grade I listed. It is within the bounds of the World Heritage Site of Westminster Palace, Westminster Abbey and St Margaret’s church.

The Jewel Tower is one of only four surviving buildings of the medieval palace of Westminster, with Westminster Hall, St Stephen’s Cloister and the Chapel of St Mary Undercroft beneath St Stephen’s Hall, and the only surviving part of the Privy Palace. Palaces are large residential complexes ranging in date from before the Norman Conquest to the post-medieval period. Medieval palaces were designed to accommodate the household of a sovereign, a close relative of a sovereign, an archbishop or a bishop. They served the dual purposes of residence and the exercise of administration, and therefore usually comprise a series of buildings, including a great hall, which was used both for hospitality and for meetings, a chapel, private apartments, offices and service buildings such as kitchens and brewhouses. Commonly, especially from the 14th century, these buildings were arranged around one or more courtyards, and many palaces were enclosed by walls and/or a moat as a mark of status as well as defence. Medieval palaces are characterised by the finest craftsmanship in construction and furnishing and by an innovation in architectural style, often as a result of contacts with foreign monarchs and clergy. All examples are associated with individuals and events of historical importance. Royal and episcopal courts were mobile in the medieval period and required a number of palaces, both in towns and in the country, although most were located within easy reach of the City of London. Less than 200 medieval palaces have been identified in England. As a rare monument class which provides an important insight into the lives and characters of a group at the apex of medieval European society, all examples with significant surviving remains are considered to be of national importance.

Despite some later alterations, the Jewel Tower survives remarkably well. As a purpose-built strong-room it is a rare example of its type and includes some extremely fine 14th century vaulting and masonry work. It is of exceptional historical interest as part of Westminster Palace, the principal seat of the monarchy and the permanent seat of government for almost five hundred years. As a design by the royal mason Henry Yevele, a key figure in the development of English Perpendicular Architecture, it is of major architectural interest. Additionally, the area in and around the immediate vicinity of the Tower will contain archaeological and environmental remains relating to the use and history of the site.