A Scheduled Monument in Farringdon Without, City of London 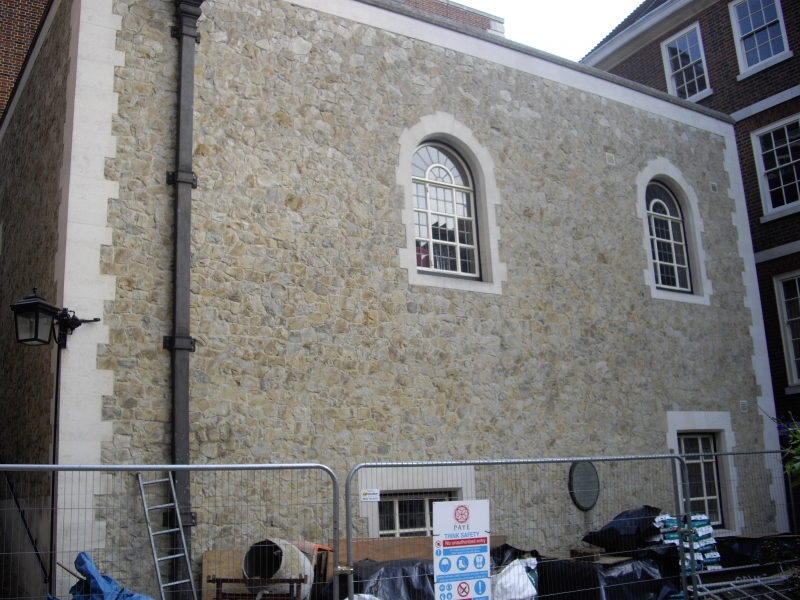 This record was the subject of a minor enhancement on 24 March 2015. This record has been generated from an "old county number" (OCN) scheduling record. These are monuments that were not reviewed under the Monuments Protection Programme and are some of our oldest designation records.

The monument includes the undercroft and service end of a 14th century hall, restored in the 19th century and in the mid-20th century, surviving as upstanding and archaeological remains. It is situated at Inner Temple which was the 12th century residence of the Knights Templars. It later became the residence of the Hospitallers, was rebuilt in the 19th century and is now barristers' chambers. It is located on the south of the Strand, near the northern bank of the River Thames. The Inner Temple Hall, to which it was adjoined, was rebuilt in 1868-70 and in 1952.

The ‘buttery’, as it is known, is a two storey oblong building about 6m long by 5m wide. It is constructed of stone rubble with an ashlar cornice, quoins, plinth and window dressings. The north side retains, at lower level, a medieval blocked pointed arched opening and blocked four-centred arch opening, above which is a mid-20th century casement window. The west side has two mid-20th century casement windows to the first floor and two rectangular windows to the ground floor or undercroft. The south front has one mid-20th century window and two square lancet windows on each floor. The building has a single-cell interior on each floor, each of which have a quadripartite rib vault with hollow chamfered ribs that spring from floor level.

The Knights Templars are known to have had two halls in the Temple before they were suppressed in the early 14th century and their property was transferred to the Hospitallers.

The Knights Hospitallers leased part of the building to lawyers (the predecessors of the barristers of the Middle and Inner Temple) for use as a hostel. On their suppression in 1539 all the property of the Knights Hospitallers, including the Temple area, passed to the Crown. The buttery is a rare 14th century survival on the site; many of the buildings were later rebuilt, or replaced after Second World War bomb damage.

Inner Temple Hall Buttery, 53m south of Temple Church, is the undercroft and service end of a 14th century hall. Domestic undercrofts of the medieval period could comprise three, four or more vaulted bays depending upon the wealth of the owner. They were constructed of stone, fireproof and used for the storage of provisions or items of special value. Although undercrofts are sometimes referred to as cellars, they were not necessarily built entirely below ground level.

Despite alterations and additions, Inner Temple Hall Buttery survives well. It is a rare example of a surviving 14th century secular building in Greater London. The building retains some significant 14th and 15th century architectural features and will contain archaeological information relating to the use and history of the site.