A Scheduled Monument in Farringdon Within, City of London 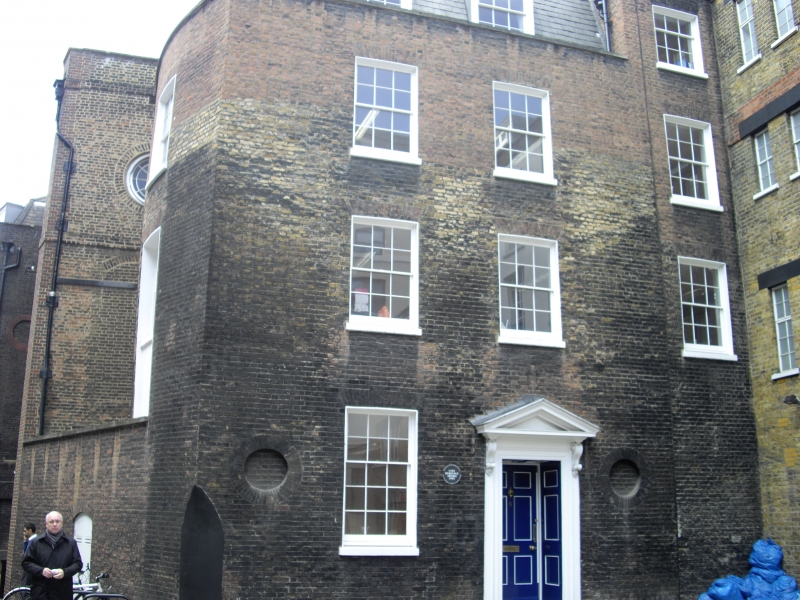 This record was the subject of a minor enhancement on 3 September 2014. The record has been generated from an "old county number" (OCN) scheduling record. These are monuments that were not reviewed under the Monuments Protection Programme and are some of our oldest designation records.

The monument includes a livery hall, incorporating medieval remains of Blackfriars Priory, built in the 17th century with alterations in the 19th and 20th centuries. It is situated between Blackfriars Lane and Playhouse Yard, north of the River Thames in the City of London.

The walls are constructed of brick, rendered in cement, and the roofs are covered with slates. It is designed around a central courtyard with the main 17th century ranges, of two storeys, to the north and east. The south and west ranges are mainly late 18th century in date and are three storeys high. It is approached through a central archway off Blackfriars Lane to the west.

The Hall, Court Room and Parlour are located on the 1st floor of the east side of the courtyard, the elevation of which features a central clock, pediment and coat of arms as well as an external stair. It includes four square headed windows at first floor level and four round lights above. The hall contains plain original panelling and carved woodwork at either end. The medieval remains of the guesthouse of Blackfriars are visible in the cellar beneath the east wing and in the outer wall of the east wing where it abuts an outer courtyard. In 1915, a two-light window, probably of 15th century date, was identified in the west wall near the north angle. In 1928, a medieval return wall was found further to the south which is included in the scheduling. The guesthouse of the Dominican Priory of Blackfriars became Lord Cobham’s house at the Dissolution of the Monasteries in 1536.

It was purchased by the Worshipful Society of Apothecaries (pharmacists) to serve as their Hall in 1632. Largely destroyed in the Great Fire of London in 1666, the Hall was rebuilt, incorporating the medieval remains, to the design of Thomas Locke between about 1669 and 1672. The west and south ranges, known as the ‘houses’ and ‘warehouses’, were added between 1780 and 1786. Further alterations were carried out in 1828-30 and 1983-7. Partial excavation in 1926-7 and 1981-3, as well as an archaeological watching brief in 1987, uncovered pits associated with the priory and located the site of Blackfriars church.

The upstanding remains of Apothecaries’ Hall are Grade I listed.

A livery hall is a type of guildhall belonging primarily to the London livery companies (chartered companies originating from the craft guilds), but also found elsewhere in the country. It is so called because of the livery worn by members of the guild. Guildhalls were traditionally the hall of a crafts, trade, or merchants’ guild but latterly had many different functions and became recognised in the 19th century as town halls. Some livery or guild halls were built in the medieval period but they became more widespread in the 17th and 18th centuries. The classic form was often a first-floor meeting room, raised on arcades, incorporating an open-sided market hall on the ground floor. They also often included administrative rooms or offices. During the eighteenth century increasing architectural elaboration was given to halls, reflecting the success of livery companies, the growth of municipal self-awareness and urban identity. Until the Municipal Corporations Reform Act in 1835, boroughs (corporations), which were often based at guildhalls, acted as private bodies that existed for the benefit of their members rather than the community at large. The Act reformed the administration and accountability of incorporated boroughs and they subsequently gained greater municipal power and responsibility. This was reflected in the scale and architectural adornment of later guildhalls, which became high points of Victorian public architecture.

A priory or friary was a religious institution housing a community of friars (from the Latin ‘frater’ meaning ‘brother'). They often included a guesthouse as part of a complex of buildings centred on the church and cloister in the monastic precinct.
The remains at Apothecaries’ Hall will provide evidence of medieval masonry techniques and architectural details. It will also retain archaeological remains relating to the former use and history of the site as a priory. Apothecaries’ Hall itself is one of the oldest extant livery company halls in the city of London. The first-floor structure and arrangement of the Great Hall, Court Room and Parlour in the east wing remain largely as rebuilt between about 1669 and 1672. As such it is of considerable historic interest as testament to 17th century developments in commercial activity and trade regulation.