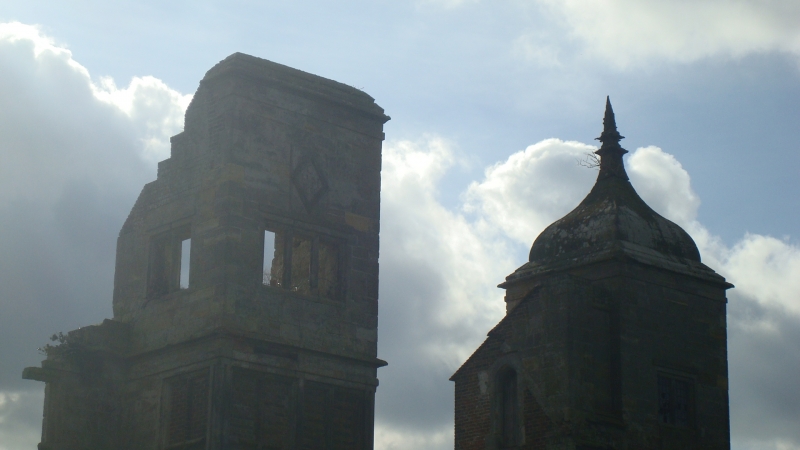 This record was the subject of a minor enhancement on 27 November 2014. The record has been generated from an "old county number" (OCN) scheduling record. These are monuments that were not reviewed under the Monuments Protection Programme and are some of our oldest designation records.

The monument includes an early 17th century country house surviving as upstanding and below-ground remains. It is situated on gently sloping ground north of the River Medway. The upstanding remains include much of the north front, containing the main entrance and three towers which stand unattached up to three storeys high and built of ashlar. The central tower includes a porch with the remains of a rib vault and niches to the left and right. Above is a carved coat of arms and the date 1631. The west tower is surmounted by an ogee-shaped cupola with finial. The internal details, including the fireplaces and cupboards at basement level, are still preserved. The east tower has one window on each floor. All surviving windows in the house have stone mullions and those in the west tower retain their glass. Behind the north front are the roofless remains of a vaulted undercroft, which was originally accessed from the foot of the east tower by a tunnel-vaulted ramp. Part of the western wall of the house and fragments of the southern wall also survive. The house was built by Sir Henry Compton and, though unfortified, it included a garden enclosed by a substantial stone wall with a gatehouse on the north side. The round-headed stone archway of the gatehouse is still extant with a keystone and imposts, and a portion of a wall on either side of it. The site contains below-ground archaeological remains, foundations and deposits, which will provide information on the history and use of the building.

Country houses of the late Tudor and early Jacobean period comprise a distinctive group of buildings which differ in form, function, design and architectural style from country houses of both earlier and later date. Built after the dissolution of the monasteries they are the product of a particular historical period in which a newly-emerged Protestant elite of lawyers, courtiers, diplomats and other officials, mostly with close contacts at court, competed with each other to demonstrate wealth, taste and loyalty to the sovereign, often overstretching themselves financially. Their houses are a development of the medieval hall with flanking wings and a gatehouse, often looking inwards onto a courtyard; later examples tend to be built outwards, typically on a U- or H-plan. The hall was transformed from a reception area to an entrance vestibule and the long gallery and loggia were introduced. Many houses were provided with state apartments and extensive lodgings for the accommodation of royal visitors and their retinues. Country houses of this period were normally constructed under the supervision of one master-mason or a succession of masons, often combining a number of designs drawn up by the master-mason, surveyor or by the employer himself. Many designs and stylistic details were copied from Continental pattern-books, particularly those published in the 1560s on French, Italian and Flemish models; further architectural ideas were later spread by the use of foreign craftsmen. Symmetry in both plan and elevation was an overriding principle, often carried to extremes in the Elizabethan architectural ‘devices’ in which geometric forms were employed to express religious and philosophical ideas. Elements of Classical architecture were drawn on individually rather than applied strictly in unified orders. This complex network of influences resulted in liberal and idiosyncratic combinations of architectural styles which contrasted with the adoption of the architecture of the Italian Renaissance, and with it the role of the architect, later in the 17th century.

About 5000 country houses are known to have been standing in 1675; of these about 1000 are thought to survive, although most have been extensively altered or rebuilt in subsequent centuries to meet new demands and tastes. Houses which are uninhabited, and have thus been altered to a lesser degree, are much rarer. Surviving country houses of the late Tudor and early Jacobean period stand as an irreplaceable record of an architectural development which was unique both to England and to a particular period in English history characterised by a flourishing of artistic invention; they provide an insight into politics, patronage and economics in the early post-medieval period. All examples with significant surviving archaeological remains are considered to be of national importance.

Brambletye House is a fine example of a Jacobean Country House, which survives well. The upstanding remains are up to three storeys high and include many significant architectural details. The site contains valuable information relating to the ground plan of the country house. It will contain below-ground archaeological and environmental information relating to the use and history of the building.