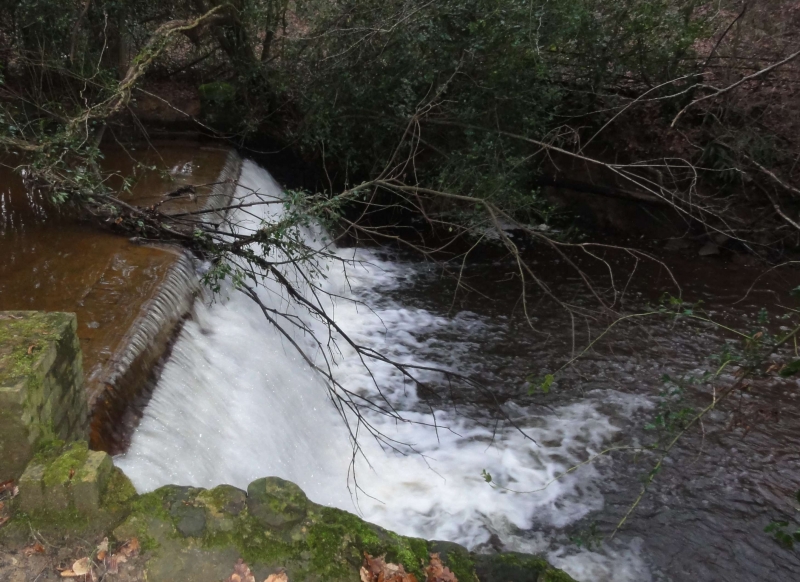 The monument includes the earliest blast-furnace in Britain, accompanied by a water system, dam and pond, surviving as earthworks and below-ground archaeological remains. It is situated on the east side of a stream at the foot of a valley, south of Newbridge Mill in Ashdown Forest on the Weald. The recovery of tap-slag from the dam suggests that it was built on the site of an earlier, medieval, powered bloomery.
The earthen dam is breached by Kidd’s Hill roadway but stands 2.4m to 3m high east of the road, and 3m to 3.7m high to the west. The west end forms a semi-circle, which is likely to have been designed to protect the iron working area of the furnace. There is a spillway at this end of the dam, as well as gaps for the wheel pits and corresponding tail-race ditches. A water channel runs north through the area of a dry pond bay to a later corn mill. The pond bay, which survives in traces, is about 150m in length with low banks. The remains of slag from the furnace, as well as forge cinder, are evident on the site.

Newbridge blast furnace was built on land owned by the Duchy of Lancaster in about 1496 to produce iron for the King's artillery on its Scottish campaign. In 1525, it was leased to Sir Thomas Boleyn. The last reference to iron working on the site is in 1603 and it is likely to have been abandoned shortly after this date.

Iron has been produced in England from at least 500 BC. The iron industry, spurred on by a succession of technological developments, has played a major part in the history of the country, its production and overall importance peaking with the Industrial Revolution. Iron ores occur in a variety of forms across England, giving rise to several different extraction techniques and structures. Ore was originally smelted into iron in small, relatively low-temperature furnaces known as bloomeries. These were replaced from the 16th century by blast furnaces, which were larger and operated at a higher temperature to produce molten metal for cast iron. Cast iron is brittle, and to convert it into malleable wrought iron or steel it needs to be remelted. This was originally conducted in an open hearth in a finery forge, but technological developments, especially with steel production, gave rise to more sophisticated types of furnaces.

Newbridge Forge and Furnace is a monument of significance as the first blast-furnace in Britain. The residues of tap-slag suggest that there is continuity on the site from earlier, medieval, bloomery production. As such, the site has a high potential for further archaeological investigation, which will enhance our understanding of the development of the iron industry.