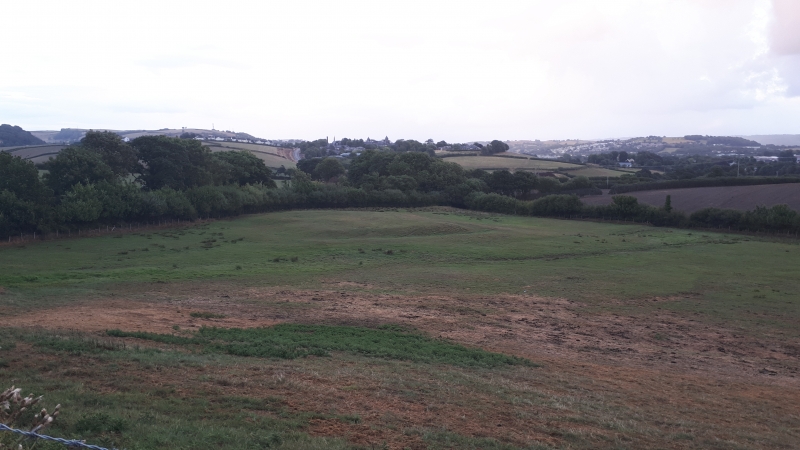 The monument comprises the remains of a well-preserved medieval moated homestead that has a well-documented foundation and history. Trebersed was a grange of the Priory of St John in Carmarthen who were granted these lands after 1244. The boundaries of this grange are given in the Carmarthen Cartulary and they define an area with this moated site at its centre. The centre of the site is a raised rectangular platform measuring c 33m by 25m and standing c 1.5m above the surrounding land. There is the suggestion of a slight bank surrounding the platform on its east, south and west sides. The platform is enclosed by a relatively shallow ditch between 5-6m wide with a counterscarp bank on all four sides. This is broad to the north but quite narrowly defined to east, south and west. There is evidence of an entrance and causeway at the centre of the north side. Running down the hill from the north is a stream, now taken around the east side of the site, which may have fed the moat originally. The stream widens into a pond c 9m wide and 35m long on the eastern boundary of the site. The land to the south of the moat falls away to another stream. It is shaped into two flat terraces, the first 8m wide, and the second 25m wide. These are bounded on the west side by a low bank and on the east side by a more substantial but less well defined earthworks including an oval mound. The area west of the moat also seems to be artificially terraced. These minor earthworks may represent garden features.