A Scheduled Monument in Aberdaron, Gwynedd 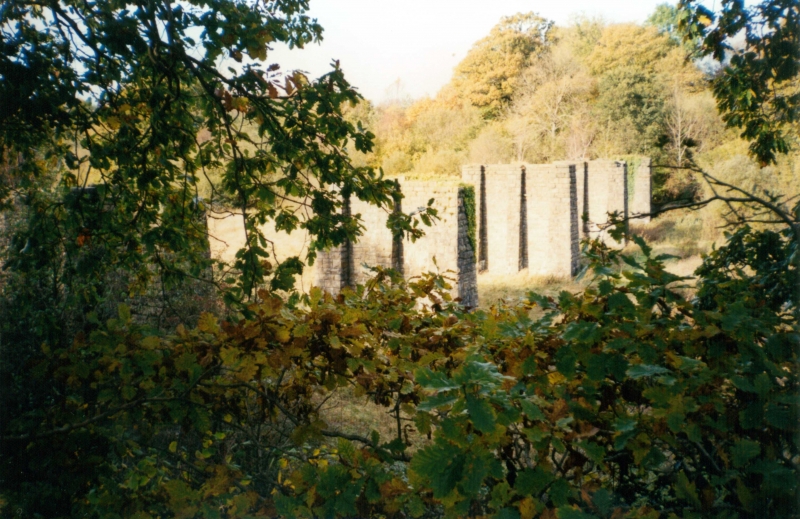 Traditionally the burial place of 6th C Saints Duricius (Dyfrig, first Bishop of Llandaff) and Deiniol (of Bangor), amongst others.

First contemporary reference is the obituary of a monk of Enlli in 1011. The church of Enlli was one of the leading churches which received gifts from Gruffydd ap Cynan shortly before his death in 1137. By the 12th C Bardsey was a well-established place of pilgrimage.

Giraldus refers to 'Culdees' (as at Beddgelert) in 1188; thus, the church remained 'Celtic' at this time, but by 1212 canons from Enlli are recorded witnessing a charter for the Augustinian foundation at Haughmond (Salop), suggesting that Enlli had by then adopted the Augustinian rule. This change is reflected in an agreement of 1252 between the Abbey of Enlli and the secular canons of Aberdaron. The Abbey was certainly Augustinian from the early 14th C to the Dissolution.

There is no direct evidence for building, but c. 1305 the Abbey was allowed to take timber from Merioneth, and in 1346 the Abbot and canons were able to shut themselves up when the island was raided.

As granted after dissolution, the site included the 'monastery or small priory' with 'the church hows & steple', plus rooms, barns, orchards and gardens. In 1662 John Ray noted a ruined church, and Pennant (1773) wrote: 'the Abbot's house...a large stone building inhabited by several of the natives' and 'not far from it...a single chapel or oratory, being a long, arched edifice, with an insulated stone altar near the east end'. The Abbot's house was still inhabited in 1814, but by 1846 only the ruined tower remained.

During rebuilding of the farms on the island in the 1870s it is recorded that many bones were found when cutting the foundations for the present buildings W of the tower. Long cists, orientated E-W, were also found when 'lowering the road'.

The geophysical survey of areas around the tower in 1973 indicated relatively few anomalies, although possible features were identified. It was suggested that the early Celtic occupation may have extended further E than the medieval buildings and that the monastic settlement never extended far to the N or S.

Only the 13th C tower survives, standing c. 7 m high, in the corner of a more recent burial ground. The tower measures 5.8 m square externally and is built of roughly coursed local rubble with sandstone dressings. The walls are just over 1 m thick at ground level and there is an internal offset at first floor height. About 1 m above this is a plain external chamfered course which reduces the thickness by another 75 mm. The facing stones have been removed from most of the S side and the quoins and some facing are missing at the base of each corner.

Putlog holes passing through the wall are visible in all walls, but these appear to have been blocked more recently. Two large recesses in the N wall seem to mark the position of floor joists. They are above the internal offset and may therefore represent a change in flooring at some time. Slightly above these are some crude holes, possibly intended to carry timbers for an improvised roof at a later date. A weathered sandstone string course survives on the W external face.

Access is through a straight passage flanked by plain jambs (lower courses only) on the S side. The interior has been cleared to ground level, exposing large boulder footings at the SE corner. A lancet window, 13th C form, in the E wall on the ground floor has lost all outer dressings, but two stones of the arch (one supported by a delta metal bar inserted in 1982) and one lower on the S side remain. Almost all dressings on the inside survive. A curious rectangular hole, c. 100 mm square, passes obliquely through the wall, parallel to the splay of the window, on the S of the opening.

At first floor level the lower portion of another lancet window survives in the N wall, and there is a straight rectangular window at a slightly lower level in the W wall. This latter window is clearly an alteration to the original design, but the surviving plaster suggests it may be a medieval addition rather than post-Reformation. In 1982 two timber lintels were added to provide additional support.

Stones projecting from the lower part of the NW corner suggest that a wall extended W from the tower, and investigations by the RCAHMW suggested that walls also continued S from the W and E walls. Blocks of fallen masonry lie to the S and may be part of the more extensive structure now lost.

Several architectural fragments recovered from neighbouring farms now lie within and next to the tower, and the two carved stones (CN141 and CN142) have been secured within the NW corner of the tower and are sheltered by slate slabs set into the tower wall.

The monument is of national importance for its potential to enhance our knowledge of medieval ecclesiastical structures. It retains significant archaeological potential, with a strong probability of the presence of associated archaeological features and deposits. The structures themselves may be expected to contain archaeological information concerning chronology and building techniques.