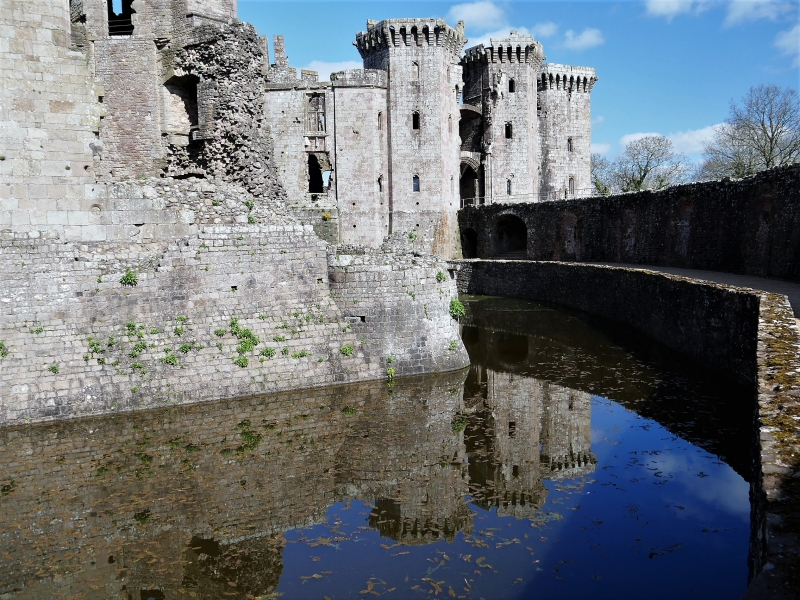 The monument consists of the remains of a castle, dating to the 15th century. Raglan was built, not as a defensive structure, but as a fortress-palace by Sir William ap Thomas in the 1430s and 1440s. Sir William had bought the manor of Raglan in 1432 and set about demolishing the existing manor house and building Raglan Castle. He built the Great Tower, the South Gate, the hall range and possibly a wall enclosing what was to become the Fountain Court. He was building to impress, to demonstrate his new-found wealth and rank, and his Great Tower, which mimicked the keeps of earlier medieval castles and was known as the Yellow Tower of Gwent, was the ultimate status symbol. William died in 1445 and his, equally ambitious, son, Sir William Herbert continued the building programme. Sir William was enormously wealthy, and a powerful supporter of Edward IV. His castle buildings include the Gatehouse, the closet tower, the kitchen and the office wing, built between 1445 and 1469 when he was executed by Lord Warwick 'The Kingmaker' for his support of the Yorkist claim. All of the 15th century buildings are characterised by very high quality stonework, with ashlared walls of pale yellow sandstone from Redbrook in the Wye valley. Some of the earliest brickwork in Wales is visible in the later 15th century parts; it was used extensively in vaulting, in the back of fireplaces, over windows and in awkward corners. William Herbert arranged his palace around two courts, now called the Pitched Stone court and the Fountain Court. He moved the entrance to the great gatehouse, added the chapel on the west side of the hall and made some changes to the Great Tower.

The castle remeained unchanged until 1549 when it was inherited by William 3rd Earl of Worcester, who rebuilt the east side of the hall and added that quintessentially Elizabethan room, a long gallery, which ran the length of the range above the chapel. The north-west and north-east sides of the Pitched Stone Court were rebuilt and a fountain called the White Horse was added in the middle of the fountain court. His buildings can be discerned from the earlier phases by the use of a redder sandstone and rubble rather than ashlar walling. William built garden terraces to give his palace appropriately grand, almost italianate gardens, enhanced by a large lake in the valley below to the north-west. Edward, 4th Earl of Worcester, inherited Raglan in 1589 and added the White Gate, the moat walk around the Great Tower and the unusual 'water parterre' at the head of the lake.

The end for Raglan came in August 1646 when Henry Somerset, 1st Marquis of Worcester and a prominent Royalist, was forced to surrender the castle to the Parliamentarians. The castle was abandoned, never to be lived in again.

The monument is of national importance for its potential to enhance our knowledge of late medieval design and construction. The monument is well-preserved and an important relic of the medieval landscape. It retains significant archaeological potential, with a strong probability of the presence of both structural evidence and intact associated deposits.