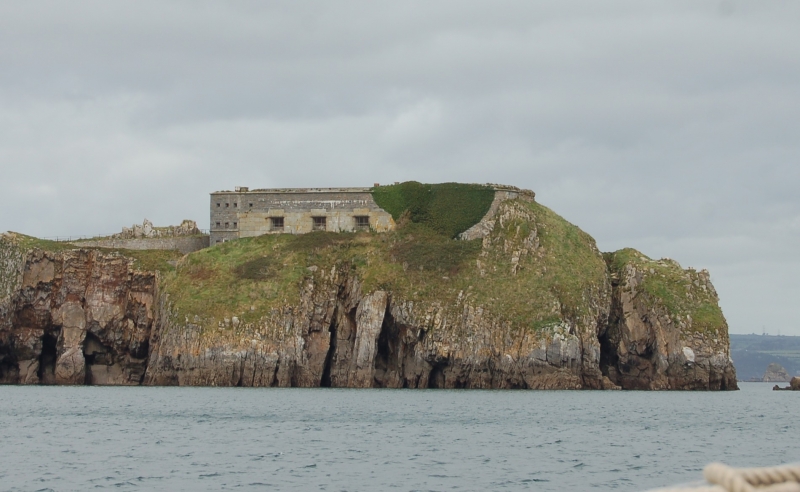 The monument consists of the remains of a stone-built castle. Possibly of Norman origin, much of the stonework remaining is 13th century; a window with seats in the north-west gatehouse overlooking the ward suggests a 13th century date.

The castle comprises a drum-tower keep with a large ward to its east side. A group of ruined buildings at the north of the ward include a gatehouse with flanking defensive turrets. Attached to the east side, externally, is a conical dovecote. The wall of the ward survives generally to a height of about 3 to 5 metres. Irregularities at intervals appear to be small open-backed defensive turrets. The circular keep at the west side is about 12m diameter, surviving to a height of about three storeys; most openings appear to be walled up except a slit opening facing west and a pointed arch facing north to the exterior. It has two small semi-circular additions, one to east and one to west, and a three-storeyed rectangular building attached to it on the exterior. The latter building survives on two sides only; it had a gabled roof running north-east to south-west; large fireplace in its south-west wall with segmental arch on corbels; remnants of flat arches in openings above.

Close to the keep is a small intra-mural building of which two walls remain, with a walled up segmental opening to the exterior. The entrance building at the north has a portcullis slot behind a gothic arch. Guard towers left and right with loops facing the entrance. The one to the north has been adapted as a dovecote, the other is inaccessible. The rear corners of this building facing the ward are rounded. Gothic arch of two orders to rear opening to the ward; above this a first floor lancet window with seats in the reveals. Along the north side is an enclosure with traces of intra-mural buildings. Two walls at the north east side are a fragment of a building to which the lost wall dividing the ward into two halves was attached.

The castle was abandoned in favour of Oxwich Castle in the late medieval period and fell into ruin. It was slighted by Cromwell. When engraved by Buck in c. 1735 the surviving curtain wall still had its crenellations. The ruins were probably reduced for picturesque effect in the late 18th century. A wall dividing the ward into two halves has nearly all disappeared.