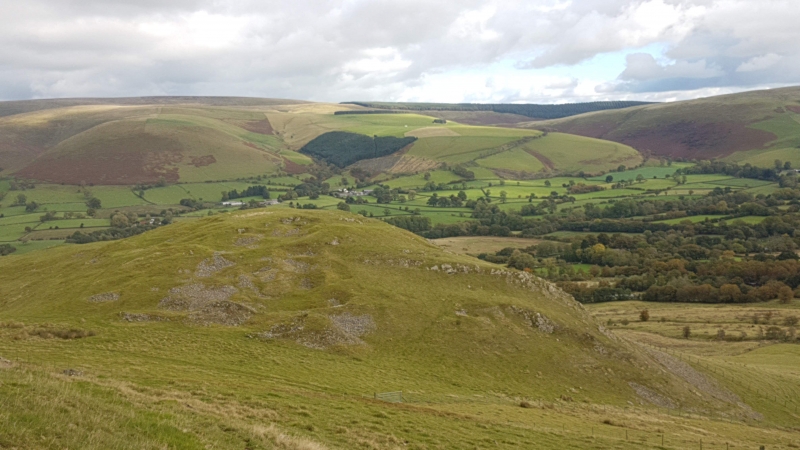 The monument comprises a small multivallate hillfort, probably dating to the Iron Age (c. 800 BC - 74 AD, the Roman conquest of Wales) and situated on an imposing ridge on the NE side of Llandegley Rocks, commanding the lower slopes to the S and E and overlooking the valley between it and the hills of Radnor Forest. The fort measures about 150m from NE to SW by 45m transversely within its defences and comprises an upper enclosure (possibly representing an initial phase of defence) with lower annex extending to the NE (perhaps a later addition). The level interior of the upper enclosure is enclosed by surviving ramparts on the NE and S sides - that to the NE contains a break that may represent an original entrance. The lower annex is enclosed by two parallel ramparts of spread stone measuring between about 3m and 5m in thickness and between about 0.5m and 1.5m in external height. These ramparts follow the contours around the NW side of the fort, the upper rampart curving around the NE end of the fort and fading into a terrace (with possible palisade trench visible) that runs along the top of the steep natural slope. Both enclosures are defined on their SE sides by the steep natural rocky slopes of the ridge.

The monument is of national importance for its potential to enhance our knowledge of later prehistoric defensive organisation. The monument forms an important element within the wider Iron Age context and within the surrounding landscape. Much of the SW corner of the hillfort has been disturbed by small scale quarrying in antiquity, an area including the likely position of the entrance. However, the summit and annex of the hillfort - and the majority of the ramparts - are undisturbed and may be expected to contain archaeological information in regard to chronology, building techniques and functional detail.

The area scheduled comprises the remains described and an area around them within which related evidence may be expected to survive. It is measures 195m from NE to SW by up to 75m transversely.