A Scheduled Monument in Pontarfynach, Ceredigion 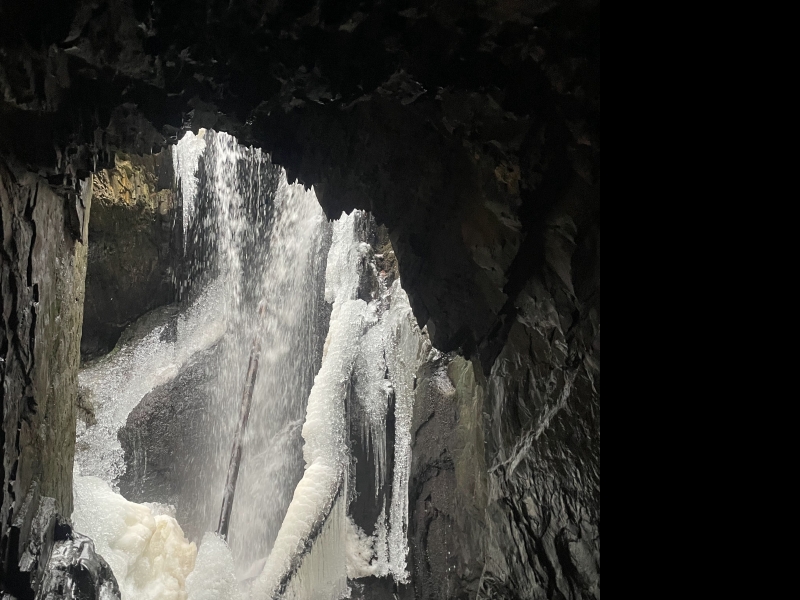 The monument consists of a grotto, dating to the 18th century. A grotto is a shady cavern built as a garden feature. In the 18th century grottos usually took the form of an artificial rocky cave or apartment in a wild part of the grounds. The cavern Cascade was the main destination of the Gentleman’s Walk finished by Thomas Johnes in 1795. The path leads up the narrow ravine of the Nant Gau. At a sharp turn in the stream, a set of rock-cut platforms leads to some rock-cut and rubble steps. These rise to an artificial tunnel whose entrance is enhanced by mass drystone walling. The tunnel runs into the hill for c.15m then turns a right angle to the left to open out immediately below the Cavern Waterfall and its deep circular pool. Boulder work below the rock-cut platforms may be artificial, but all traces of the rustic wooden bridge across the stream have gone.

From 1780 until his death in 1816 Thomas Johnes transformed the landscape around his mansion of Hafod, high in the Ystwyth valley, into an outstandingly picturesque domain, threaded with walks and rides from which to view picturesque scenes. A number of built features were an integral part of the landscaping, heightening, in their design and location, the picturesque experience. The large scale of the undertaking, combined with the ruggedness of the scenery, has led this type of landscaping to be dubbed the 'wilderness picturesque'. Hafod rapidly became nationally famous and visitors flocked to admire the Hafod scenery, which was much described and depicted. From many contemporary accounts, drawings and paintings, and in particular from George Cumberland's 'An attempt to describe Hafod' (1796) it is possible to gain some idea of the late eighteenth/early nineteenth-century appearance of the landscape and the structures within it. There can be no doubt of the exceptional historic interest of the remains at Hafod associated with its picturesque landscaping.

The monument is of national importance for its potential to enhance our knowledge of the use of gardens, parks and urban spaces in the 18th and 19th centuries. It retains significant archaeological potential, with a strong probability of the presence of associated archaeological features and deposits. Hafod is registered as Grade 1 on the Cadw/ICOMOS Register of Parks and Gardens of Special Historic Interest in Wales.