A Scheduled Monument in Dolbenmaen, Gwynedd 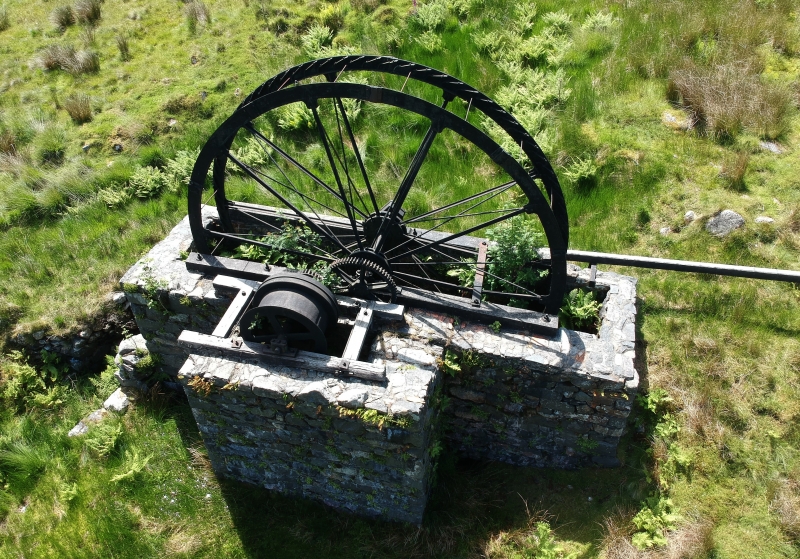 The monument comprises the well preserved remains of a copper mine situated by a small stream in a sheltered, shallow upland valley above a steep scarp which falls some 90 m to Cwm Pennant to the E.

Within the SA are three open mineshafts, largely water-filled. The dominant feature is the iron water wheel, set in a stone-built wheel pit. The wheel is 24' in diameter, 3'7'' wide, and was made by Dingey & Sons, Truro. It may have generated about 20 BHP at 4.5 RPM, and power was transmitted to the winding drum (probably Cornish) by an unusual internal expanding clutch with external brake bank.

As well as the winding drum, the wheel also powered a T-bob which operated the pump rod which can be seen in one shaft. The intermediate T-bob also survives, lying loose on the site, although some of its fastening to the ground remains in situ. The wheel was fed from a raised leat which no longer survives, supplied from a small reservoir to the S which is not in the SA.

Other structures on the site include a small, tumbled, rectangular stone building next to the stream, standing to a height of 1.8 m, and a larger stone building, similarly ruined, to the SW of the wheel.

The monument is of national importance for its potential to enhance our knowledge of the Post-Medieval/Modern Industrial period.