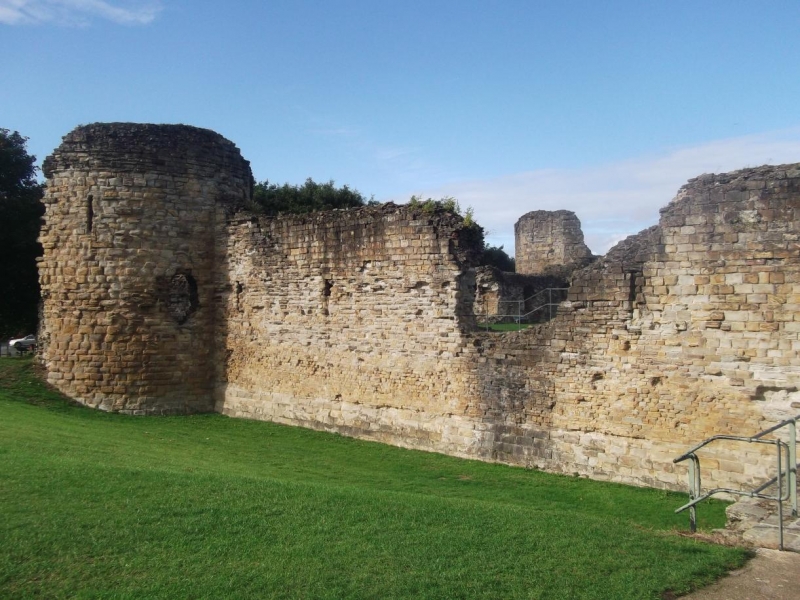 This monument comprises the remains of a medieval castle begun in 1277 by King Edward I. The castle is located on the foreshore of the Dee estuary, dominating the river and the route along the coastal plain.

The castle consists of a square ward with a round tower at each corner. Notably, the south-eastern tower (Great Tower) is much bigger and offset from the main courtyard by a moat which probably contained sea water at high tide, and was crossed by a drawbridge. This highly sophisticated separate tower or donjon has a strong barrel-vaulted circular gallery at basement level, surrounding a central space and supporting a ring of small interconnecting rooms on the floor above. It probably contained all the facilities necessary to withstand a siege (storerooms, well, residential accommodation, chapel) many of them duplicated in the courtyard, and was effectively a castle within the castle. Notably, this unique tower design has no known exact parallel in Britain or the Continent.

The North-East Tower is the best preserved of the three towers around the inner ward. It comprised a basement with three floors above, some of which appear to have been residential. The North-West Tower contains arrowslit embrasures in the basement, though the upper rooms may have been residential. A large fireplace survives on one floor. The South-West Tower contained a circular basement with three circular storeys above.

To the south of the castle lies a moated outer ward, although it does not totally surround the castle. Here the outer gatehouse was located. Details of a turning bridge, which spanned a section of the ditch, have been recovered by archaeological excavation. Little survives of the curtain walls; only the southern wall and a section at the north-west still remain on the original scale. The rest, together with the three corner towers were robbed to varying extents during later reuse of the castle. Within the curtain wall, close to the Great Tower, sits the inner gatehouse. This was protected by a turning gate, set of doors at the end of the entrance passage and portcullis.

The castle changed hands several times during the Civil War, before finally falling to Parliament in 1646; shortly afterwards it was substantially destroyed. Subsequent use of the site saw a new county gaol built in the outer ward of the castle in 1784-85, a structure which survived until 1962.

This monument is of national importance for its potential to enhance our knowledge of medieval social, domestic and political life and warfare. The scheduled area comprises the remains described and an area around them within which related evidence may be expected to survive.