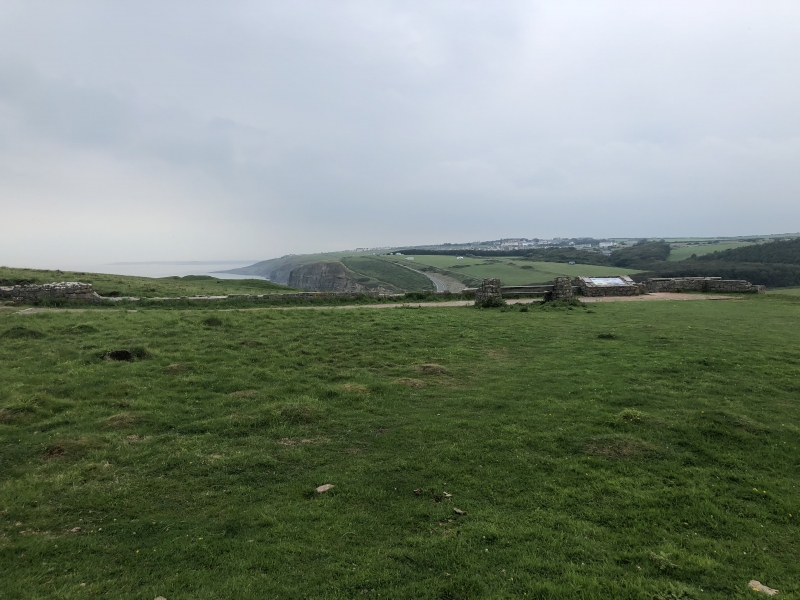 The monument comprises the remains of a defended promontory fort, which probably dates to the Iron Age period (c. 800 BC - AD 43). It occupies an area an irregular coastal headland and measures c. 400m east to west by 100 to 300m, rising to 60m above sea level in the interior. The promontory is isolated on the north east by a steep sided cwm and along the south west the enclosure is defended by double banks and ditches measuring 43m wide and 12m high overall, lost towards the eastern end where destroyed by the construction of the now demolished Dunraven Castle mansion. On the north west the defences curve around to the cliff edge and are reinforced by an additional bank. On the north another bank also bends around to the cliff where it may have helped define an entrance passage; an extension of this bank along the side of the cwm north west forms an annexe. Within the enclosure the sites of 21 possible roundhouses have been identified. Medieval or later re-use of the site for rabbit farming has resulted in two groups of ‘pillow mounds’ within the enclosure. One near the tip of the promontory of four long, one oval and four round mounds and one north of the summit of four round and one long mound. Promontory forts may have represented symbols of power within the landscape and have been associated with the control of coastal trade.

The monument is of national importance for its potential to enhance our knowledge of later prehistoric defensive organisation and settlement. The site forms an important element within the wider later prehistoric context and within the surrounding landscape. The site is well preserved and retains considerable archaeological potential. There is a strong probability of the presence of evidence relating to chronology, layout, building techniques and functional detail.