A Scheduled Monument in Llanberis, Gwynedd 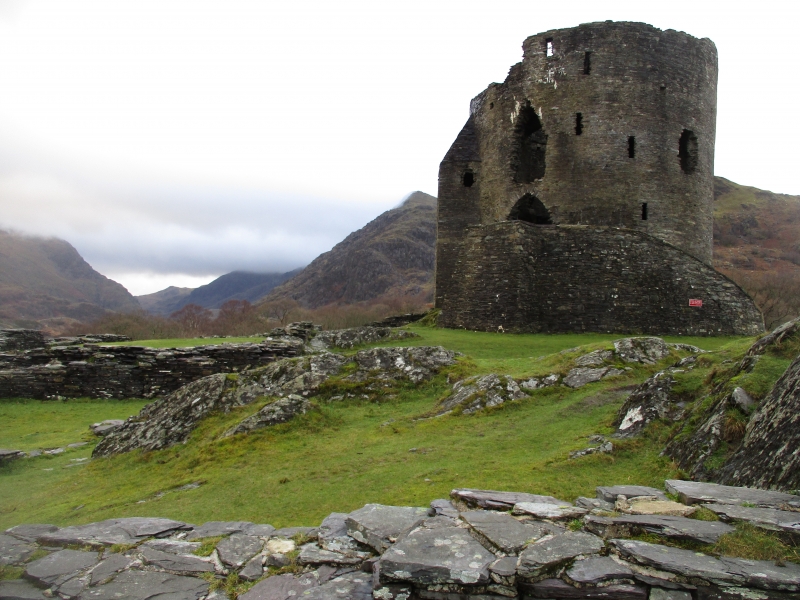 The monument consists of the remains of a castle, dating to the medieval period. A castle is a defended residence or stronghold, built mainly of stone, in which the principal or sole defence comprises the walls and towers bounding the site. Some form of keep may have stood within the enclosure but these were not significant in defensive terms and served mainly to provide accommodation.

Dolbadarn Castle was one of three castles begun by the Prince of Gwynedd, Llywelyn ap Iorwerth in the early thirteenth century to defend the passes into Snowdonia, together with Dolwyddelan Castle (CN040) and Castell y Bere (ME023). It sits at the tip of Llyn Padarn, and controlled the main routeway through the Llanberis Pass, and also guarded the economically important cattle pastures of the area.

The masonry of the castle is of several periods: the earliest work is unmortared and consists of a simple curtain wall enclosing the summit of the rock, within which there were a number of rectangular structures, including a hall. A large, well-built round keep is a later addition dating from the 1230s. Its first-floor entrance was originally reached by a timber stair and, unusually, the doorway was defended by a portculis. Inside the tower, beam holes for the two main floor levels can be seen, as well as fireplaces. The basement was reached by a ladder and the second floor and roof via a circular staircase in which the spiral reverses direction halfway up. It is probable that this tower was the site of Owain ap Gruffudd’s long imprisonment, from 1255 to 1277.

The castle fell into English hands after the defeat of Llywelyn ap Gruffudd in 1282 and was soon supplanted by Edward I’s new fortification at Caernarfon (CN079), and so was partially dismantled and abandoned. Little is recorded concerning the castle after the early fourteenth century, though there is a suggestion that Owain Glyndwr used the castle to imprison captives circa 1400.

The monument is of national importance for its potential to enhance our knowledge of medieval defence. It is a well-preserved and important relic of the medieval landscape. It retains significant archaeological potential, with a strong probability of the presence of associated archaeological features and deposits. The structures themselves may be expected to contain archaeological information concerning chronology and building techniques.