A Scheduled Monument in Llangynidr, Powys 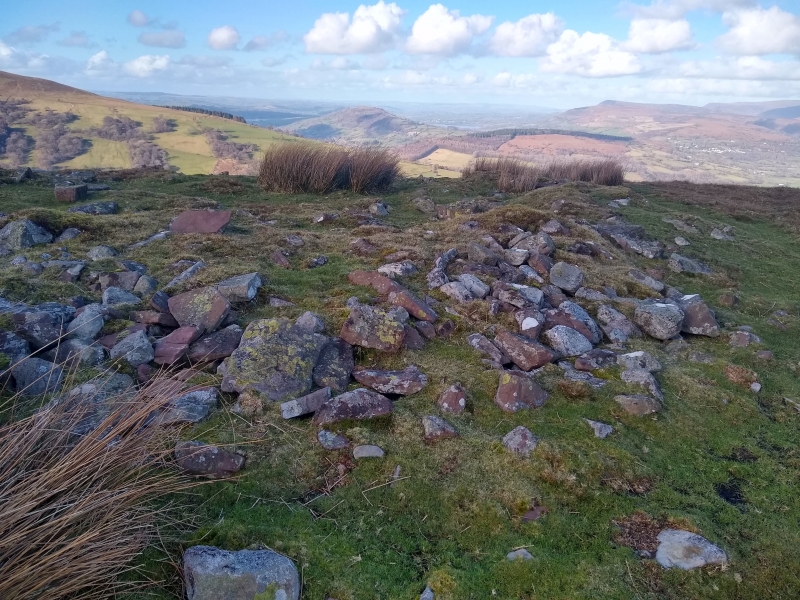 The monument comprises the remains of a prehistoric cairn cemetery, probably dating to the Bronze Age (c.2300 BC - 800 BC). The cemetery contains the remains of at least three round burial cairns, two ring cairns and a stone row and is situated within unenclosed moorland on a terrace on a NE-facing ridge of the Brecon Beacons, above the confluence of the Afon Crawnon and the River Usk. The association of the cairn cemetery with two ceremonial ring cairns and a stone row is unusual and complex. Excavation elsewhere has indicated that ring cairns had a consistent link with the burial of the dead (some cremation burials have been revealed) and rituals involving the burning and deposition of charcoal, perhaps symbolic of the funeral pyre, would seem to have been important. The stone row (Item A) comprises six upright stones aligned from NE to SW and is situated to the NE of the cairn cemetery - clearly associated with the cemetery, the row may have served to guide the eye or the ceremonial procession. An unusual and significant association, the alignment of the row appears to have been obstructed with the deliberate placing of a large recumbent stone across its SW end - perhaps indicating the closure of the cemetery.

The monument is of national importance for its potential to enhance our knowledge of prehistoric burial and ritual practices. The features are important relics of a prehistoric funerary and ritual landscape and retain significant archaeological potential, with a strong probability of the presence of both intact burial or ritual deposits and environmental and structural evidence. The importance of the monument is further enhanced by the group value formed by the association of the individual cairns within the cemetery - and the topographical association of the cemetery with the many other cairns and cemeteries that can be found within the surrounding area, including the two massive round cairns on Carn Caws (BR355 and BR356).

The scheduled area comprises the remains described and an area around them within which related evidence may be expected to survive. It is circular and measures 400m in diameter.