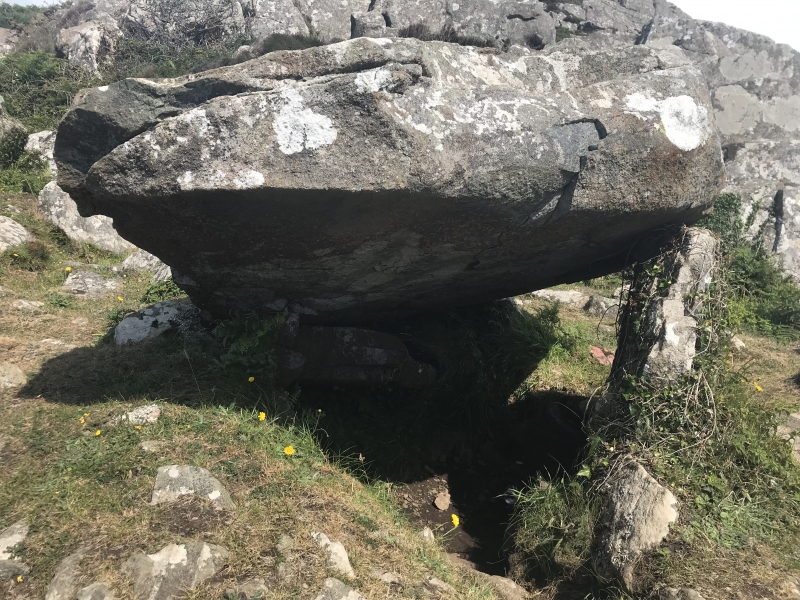 The monument comprises the remains of two chambered tombs, dating to the Neolithic period (c. 4,400 BC - 2,900 BC). Chambered tombs were built and used by local farming communities over long periods of time. There appear to be many regional traditions and variations in shape and construction.

The two sub-megalithic burial chambers lie in rock-strewn, open moorland on the sloping ground north-west of Garn Llidi, at the westernmost point of the ridge. The western chamber has a large capstone which measures 3.3m in length, 2m wide and is 0.5m thick, this is supported on the west by one sidestone, which is 1.8m tall. The other long side had been supported originally by another sidestone of roughly the same length, but this has collapsed. On the short sides are a number of smaller stones which may have formed part of the chamber walls. The chamber appears to be partly rock-cut and faces north downhill from Garn Llidi; the interior has an earth and stone floor and has maximum height of 1.7m. A smaller chamber lies 2m further east to the south of the first. Its capstone, which is 2m in length, 1.5m wide and is 0.4m thick, is supported on one sidestone and elsewhere it rests on the ground adjacent to the rock-cut chamber wall. Three other uprights survive on the north, north-west and west. The chamber is partly subterranean and is 1.3m square.