A Scheduled Monument in Fraserburgh and District, Aberdeenshire 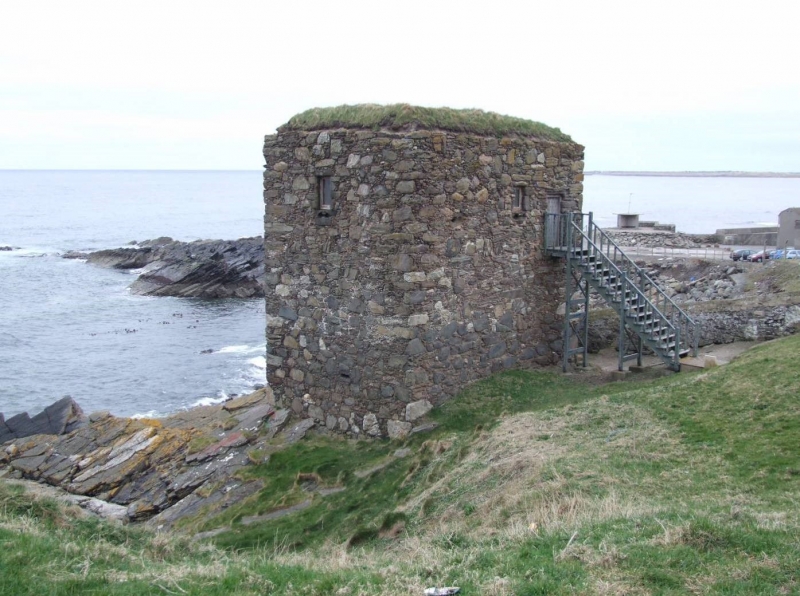 The monument is a 16th century stone tower, visible as a standing building with a rectangular plan. It measures 8.1m northwest to southeast by 6.4m and stands around 8.2m high. The monument is located on the rocky coastline of Kinnaird Head at about 10m above sea level

The tower is rubble built with three vaulted storeys, each containing a single chamber. The original entrance is at second floor level, reached by an external stair. This entrance leads into a small vestibule beyond which is the main chamber. The upper chamber has a window in each wall and a fireplace at the north end of the east wall. In the northwest angle a doorway gives access to a small turnpike stair leading to the roof and a closet with latrine located at the foot of the stair. The chamber is decorated with seven carved stone pendant bosses, depicting heraldic emblems commemorating the spiritual, political and dynastic affiliations of the Frasers. The first floor chamber is reached from the upper floor by a hatch in the floor of the upper chamber and is lit by a single window on the east. The ground floor is lit by a single slit window in the north wall. It was also originally accessed by a hatchway through the vault , located in a recess in the southwest corner. It can now be accessed by a later doorway in the south wall which is an adaption of the earlier recess.

The scheduled area is irregular in plan, to include the remains described above, as shown in red on the accompanying map. The scheduling specifically excludes the outer wooden stairway.

The monument consists of the upstanding remains of a 16th century tower, originally an ancillary building associated with the nearby Kinnaird Head Castle. The tower retains its original scale and form and contains unusual sculptural detail in the form of seven carved stone bosses. The bosses depict heraldic symbols of the Frasers and affiliated families, the royal arms of Scotland and the coat of arms of Christ. They demonstrate the familial connections and interests of the Frasers of Philorth.

The tower was built in the 16th century, probably in the latter half of the century. One of the carved bosses bears the Arms of Fraser impaling Ogilvie, commemorating the marriage of Sir Alexander Fraser, 8th Laird of Philorth, and his first wife Magdalen Ogilvie in 1559. This suggests the tower could not have been built before this date unless the bosses are insertions into an older building. The figure of eight gun loops below the windows in the upper floor also suggest a late 16th century date.

The purpose of the tower is uncertain. It originally stood at the edge of the courtyard of Kinnaird Head Castle flanked by the now demolished doocot tower, and was part of the castle complex. It has been interpreted as a private chapel built for Magdalen Ogilvie, the Roman Catholic wife of Alexander Fraser (Bryce 1987). The semi-defended nature of the upper chamber may support this interpretation, along with the decoration of one of the carved bosses with the symbols of Christ, known as the Arma Christi. However, the room is not obviously a chapel; it is oriented north-south with a fireplace occupying the east wall and there are no features indicating a specific ecclesiastical use. The remaining bosses depict the heraldic symbols of the Frasers and other families, rather than religious symbols.

It is likely the tower has served several different purposes since its construction in the 16th century. The tower was used as a powder magazine and store during the 19th century and is recorded as being used as a store for the nearby lighthouse in 1914. Scientific study of the monument would allow us to develop a better understanding of the overall form of the tower (for instance did it have additional fllors) and its relationship with the wider castle complex.  It would also help our understanding of the chronology of the site, including its date of origin, original purpose and changing use and status.

The monument has the potential to enhance our understanding of the date of construction and function of the tower and its relationship to the nearby castle. It can add to our knowledge of construction techniques and architectural preferences of the time, and the way in which the fashion and function of such buildings developed. The carved stone bosses have the potential to further the study of craftsmanship, design influences and artistic significance and enhance our knowledge of sculpture and heraldry. They can add to our knowledge of the religious, social and political history of late 16th century Scotland.

The monument is the only surviving ancillary structure of the nearby Kinnaird Head Castle (which was converted into Scotland's first mainland lighthouse in 1787). Although most castles were provided with additional buildings such associated features rarely survive. Additionally, the seven finely carved stone bosses within the tower are of particular significance. Similar carvings are found at the castles of Gight (scheduled monument reference SM2508; Canmore ID 19800), Craig (listed building reference LB2736; Canmore ID 17245), Towie-Barclay (listed building reference LB16405; Canmore ID 19196) and Delgatie (listed building reference LB16421; Canmore ID 19251). The bosses in the Wine Towner are particularly well carved and their presence in an otherwise plainly decorated ancillary tower is unusual. The tower therefore is an unusual survival of a structure associated with a late medieval/early modern castle.

The Wine Tower has the potential to broaden our understanding of the nature and chronology of late medieval/early modern defensible houses and their ancillary structures, their place within the landscape of northeast Scotland, and the development and use of such sites over time.

The tower is connected with a legend which tells the story of the 17th century daughter of the head of the Fraser family who fell in love with a piper. Her father imprisoned the piper in a cave which supposedly runs below the Wine Tower and locked his daughter in the tower above. During a high tide the piper drowned and the daughter leapt to her death from the window to the rocks below. Until recently the lighthouse keepers threw red paint on the spot as a tribute when they were painting the lighthouse.

This monument is of national importance because it makes a significant addition to our understanding of the date, construction, use and development of late medieval/early modern defensible houses and their ancillary structures. It is an impressive structure that retains its field characteristics and contains unusual sculptural detail in the form of seven stone bosses carved with heraldic designs. The tower makes a significant contribution to today's landscape and would have been a prominent part of the historic landscape. The loss or damage of the monument would diminish our ability to appreciate and understand the character and development of tower houses and their ancillary structures. It would reduce our understanding of religious, social and political history during the late medieval and early post-medieval periods, as well as the development of such sites over time.

Bryce and Roberts, I B D and A. (1993) Post-Reformation Catholic houses of north-east Scotland', Proceedings of the Society of Antiquaries of Scotland, vol. 123.