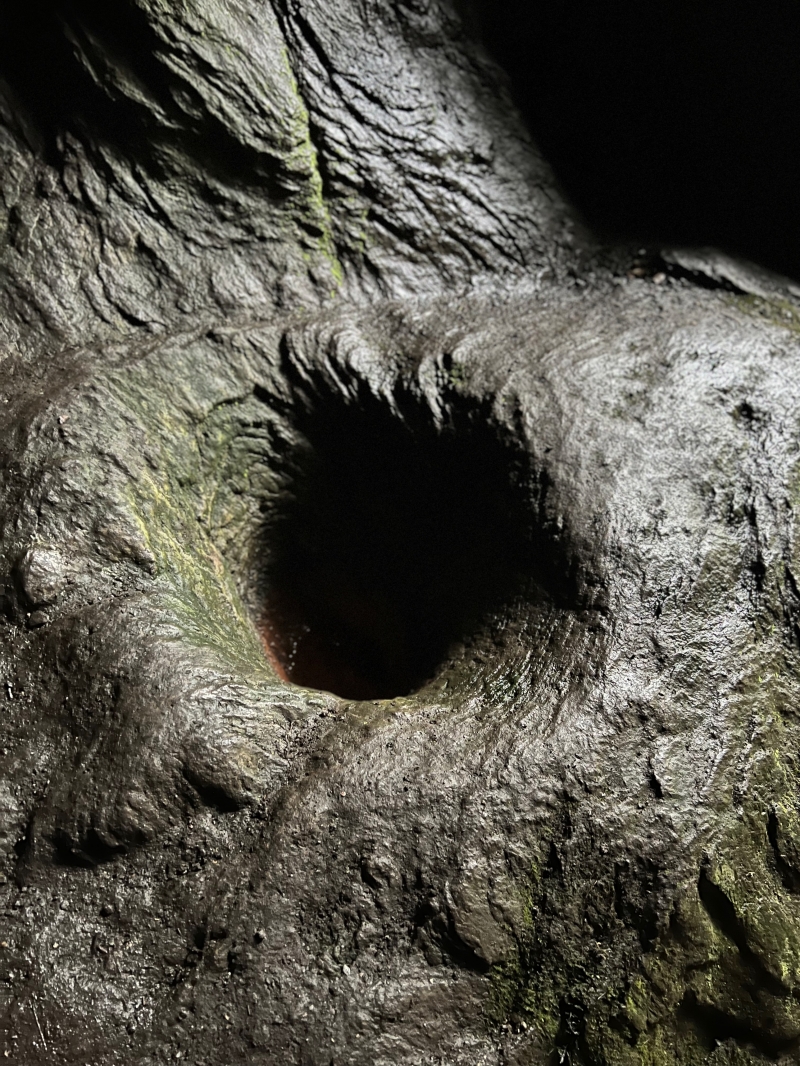 The monument comprises a natural cave, known as St Columba's Cave, which contains evidence for occupation and activity spanning from the Mesolithic to present, and the remains of an associated 13th-century chapel. The cave and chapel lie approximately 10m above sea level on the N shore of Loch Caolisport in a sheltered bay.

St Columba's Cave comprises a large natural cave running NNE-SSW, which measures approximately 15m at its greatest width across the cave entrance, and is approximately 23m deep. The cave interior contains a drystone altar on a natural shelf on the E side, above which two rock-cut crosses of probable early Christian date are carved into the cave wall. On the W side of the interior, there are traces of drystone walling and sockets in the cave wall which may have supported timber structures. Near the entrance is a hollow rock-cut bowl. There are also traces of a drystone wall at the edge of a raised platform area just to the S of the cave mouth. The cave was cleared at the end of the 19th century. Excavations of the cleared material and inside the cave between 1959 and 1976 produced a rich assemblage of artefacts and revealed evidence for its use as a site of Mesolithic and Iron Age occupation and activity, and its use as an early Christian place of worship and later medieval religious activity, including burials. The 13th-century chapel is situated approximately 35m SSE of the cave mouth and is associated with the later use of the cave as a place of religious activity and burial. The overall footprint of the chapel survives intact, measuring approximately 10m W-E by 5m N-S, within walls up to 1m thick. The upstanding remains are a mixture of dressed and rubble courses with later mortar. The W gable survives to the greatest height; the E gable has an opening which may once have been a window. The chapel has a paved E end, with large stone slabs forming an altar-base, and a cobbled western end.

The scheduled area consists of two discrete irregular areas as shown on the attached plan to include the remains described above and an area around them within which evidence relating to the monument's construction, use and abandonment is expected to survive. The above-ground elements of a wooden fence and gate at the entrance of the cave are specifically excluded from the scheduling to allow for their maintenance.

The monument is of national importance as a natural cave containing evidence for its repeated use from the Mesolithic onwards, including the early Christian period, and an associated later chapel. The monument has high potential to contribute towards our understanding of the origins and development of places of worship from the early Christian period through to the post-Reformation period and, more specifically, of early medieval religious practices and burial rites. It can also contribute greatly towards our understanding of the human use of cave sites and early human occupation in Scotland. The cave retains its field characteristics to a significant degree, and has excellent contextual and associative characteristics. There is high potential for the survival of important archaeological remains within, beneath and around the upstanding chapel remains, and in undisturbed areas of the cave and the immediate surrounding area. The close physical relationship between the cave site and the medieval chapel, together with the area's association with St Columba and the origins of Christianity in Scotland, make this a particularly significant site. The cave itself is one of the most important cave sites in Argyll for its wealth of archaeological remains from the Mesolithic and Iron Age periods, and for its connection with St Columba. Loss of either component of the site would diminish our understanding of the origin and spread of Christianity in Scotland and the development of places of worship over time.