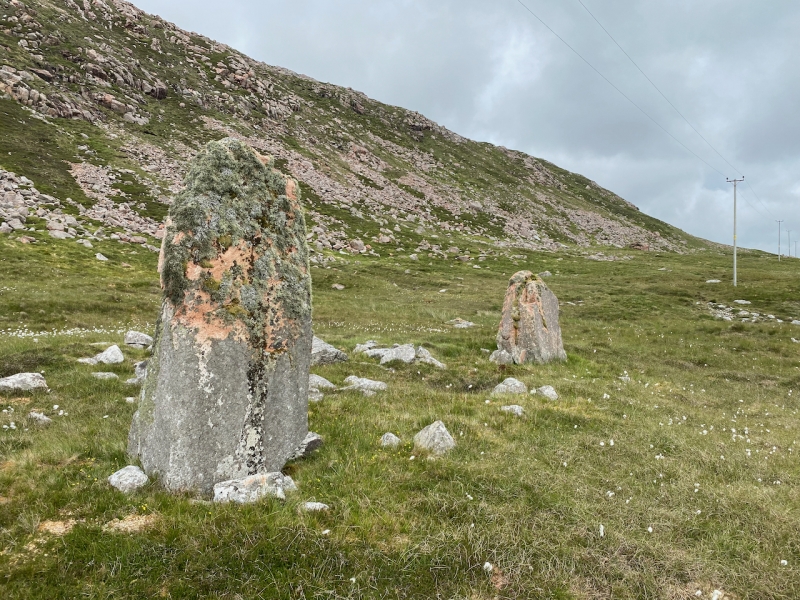 The monument comprises two standing stones and the remains of a cairn of the Neolithic period, built probably between 4000 and 2500 BC. The two standing stones are both rough undressed blocks of red granite. They are 5.5m apart and aligned N-S. The southernmost stone is the larger of the two and stands 2.45m high; the northernmost stands 2m high. Packing stones are visible around the bases of both standing stones. Between the standing stones, a row of facing stones defines the E-facing concave façade of a probable heel-shaped cairn. The cairn is visible as a low spread of stones, with a large central capstone collapsed in situ which may be obscuring the chamber. The cairn measures around 7m E-W by 6m transversely, while the E-facing façade is up to 8m wide with a slightly off-centre entrance to the passage. The largest boulders occur in the façade, with smaller stones forming the kerbing around the sides and back of the cairn. The cairn stands at around 30m above sea level on a gentle slope at the base of the steep-sided slope of the Beorgs of Housetter and overlooks the Loch of Housetter 150m to the east. The monument was first scheduled in 1962, but the documentation does not meet modern standards: the present rescheduling rectifies this.

The area to be scheduled is a circle, 25m in diameter, centred on the monument. The scheduling includes the remains described above and an area around them within which evidence relating to the monument's construction, use and abandonment may survive, as shown in red on the accompanying map.

The monument is in a stable condition and retains much of its original form. The standing stones are erect and in good condition. The packing stones at the base of both stones would have helped to keep them upright and indicate that the monoliths were placed in pits when first erected. Archaeological deposits are likely to survive in buried horizons around and at the base of the stones. The monument retains a number of interesting features, including the curving line of the façade, the large capstone and, most significantly, the incorporation of two standing stones within the structure of a chambered cairn. The cairn façade curves outwards to form the traditional 'horns' of a heel-shaped cairn, but is highly unusual in terminating in the two standing stones, which would have considerably increased the original visual impact of the façade. Standing stones are rarely incorporated into chambered cairns: Giants Grave therefore offers a rare potential opportunity to understand the development sequence between cairns and standing stones.

Chambered cairns are Neolithic in origin, dating most commonly from the third and fourth millennia BC. Excavation elsewhere suggests that they were used over a lengthy period and housed the remains of multiple individuals. Despite the removal of stone from this cairn, significant archaeological information is likely to survive beneath its surface. The presence of a large capstone could indicate that the main burial chamber is still intact. The excavation of similar sites elsewhere in Scotland shows that cairns might be adapted over time and might also form a focus for burial in later periods. Buried deposits associated with cairns can help us to understand more about the practice and significance of burial and commemorating the dead at specific periods in prehistory. They may also help us to understand the changing structure of society in the area. In addition, the cairn is likely to overlie and seal a buried ground surface that could provide evidence of the immediate environment before the monument was constructed. Botanical remains, including pollen or charred plant material, may survive within archaeological deposits deriving from the cairn's construction and use.

This evidence can help us to build up a picture of climate, vegetation and agriculture in the area before and during construction and use of the standing stones and cairn.

Standing stones are widespread in Scotland, demonstrating that prehistoric people occupied much of the country, stretching from the south and southwest to the Northern Isles. Standing stones are often part of a wider system of monuments, such as henges, stone circles and cairns, though rarely as directly as in this case. Standing stones often take advantage of natural routeways and vantage points; in this case, there are impressive views from the stones towards the south and east. Heel-shaped cairns are a rare and distinctive form of chambered cairn found in the Shetland Islands. They share several traits with prehistoric houses in Shetland, especially their elaborate well-built façades. The large prehistoric house at Stanydale, often referred to as a 'temple', has a very similar heel-shaped façade. Heel-shaped cairns are believed to be a variation of the 'Orkney Cromarty' cairn type, as identified by Henshall, but their size is typically much smaller.

This monument is also of particular interest because it is located in a landscape rich in prehistoric monuments, including other cairns. There are other cairns 75m to the NNE and 130m to the W. Across Scotland cairns are commonly positioned to be highly visible and are often inter-visible. The position and significance of this cairn in relation to contemporary agricultural land and settlement is likely to be significant and merits future detailed analysis. Given the many prehistoric sites in the area, this monument has the potential to further our understanding not only of funerary site location and practice, but also of the structure of early prehistoric society and economy.

Like many of Shetland's prehistoric monuments this cairn has become the focus of local legends. This cairn is known as the 'Giant's Grave' because it is supposed to mark the spot of a giant's burial.

This monument is of national importance because it has an inherent potential to make a significant addition to our understanding of the past, particularly the design and construction of cairns, the relationship between standing stones and burial monuments, the nature of burial practices, and their significance in prehistoric and later society. Buried evidence from cairns can also enhance our knowledge of wider prehistoric society, how people lived, where they came from and who they had contact with. This monument is particularly valuable because it lies in a landscape with a wealth of prehistoric monuments. The loss of the monument would significantly diminish our future ability to appreciate and understand the placing of such monuments within the landscape and the meaning and importance of death, burial and ritual practices in prehistoric times.

RCAHMS records the site as HU38NE 3.

Henshall, A S, 1963 The Chambered Tombs of Scotland, vol 1. Edinburgh.