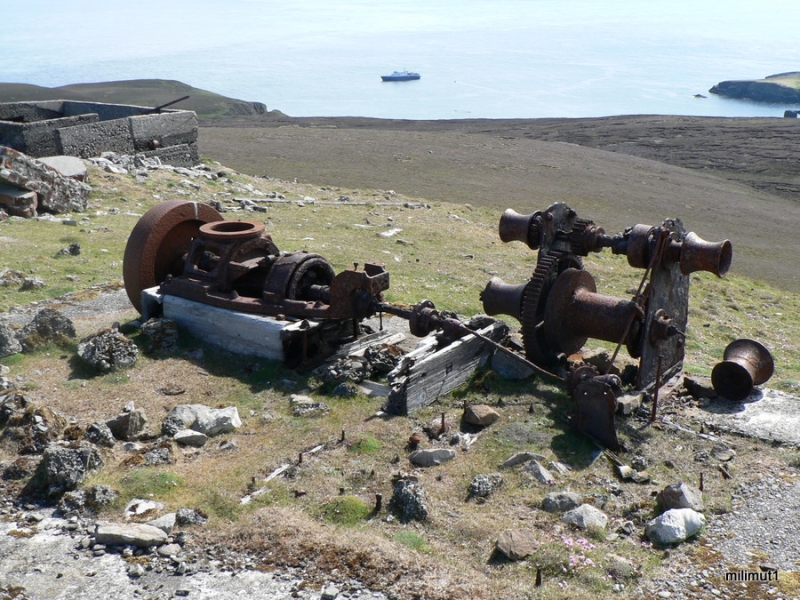 The monument comprises the remains of a World War 2 radar station on Ward Hill, the highest point of Fair Isle.

The remains consist of a range of concrete constructions, some reduced to their lower wall courses, with a small number of minor structures of stone and turf construction. There are four main groupings of structures.

1. At the summit of the hill are the remains of several accommodation structures and one large (metal-framed) plus four small (wooden framed) aerial footings: the metal aerial mast was deliberately felled by explosive some years ago, but survive as tangled wreckage. The rusted remains of the antenna turntables from the top of these masts survive.

2. At the foot of the slope to the SE are several generator and control houses, some of the former still containing the rusted remains of generators, and this group is linked to the hilltop by the remains of a cable-hauled railway of very narrow gauge. There are also several footings and platforms for wooden or metal huts here, but the superstructure of these has vanished.

3. To the NE of the hilltop structures are two outlying roofed structures and a mast foundation.

4. Finally, on an isolated knoll to the S of the hilltop are structures which represent the remains of a large collapsed Nissen-type hut and an associated low-walled paved enclosure, possibly comprising a heavy anti-aircraft battery for a mobile gun. An interesting feature of the site is the presence on the hilltop of two stone-and-turf built enclosures which are probably pits for heavy machine guns: this use of local material is paralleled widely, notably in the Faroe Islands, where similar radar establishments were erected at almost exactly the same date.

The area to be scheduled is in two parts. The larger area is an irregular quadrilateral covering the whole top and SE flank of Ward Hill, just excluding the modern transmitter which stands on the SE shoulder of the hill, and measuring a maximum of 400m N-S by 525m WNW-ESE. The smaller area is a circle 25m across to include the outlying structures to the SSE of the summit of Ward Hill. The area to be scheduled is shown in red on the accompanying map extract.

The monument is of national importance as the well-preserved remains of a very early radar station, which despite some deliberate destruction still preserves excellent evidence for the construction, layout and interlinkage of the various elements of such sites. Its construction on Fair Isle represents a considerable logistic feat, and indicates the continuing importance of Fair Isle in national schemes of defence into the modern era.