A Scheduled Monument in Huntly, Strathbogie and Howe of Alford, Aberdeenshire 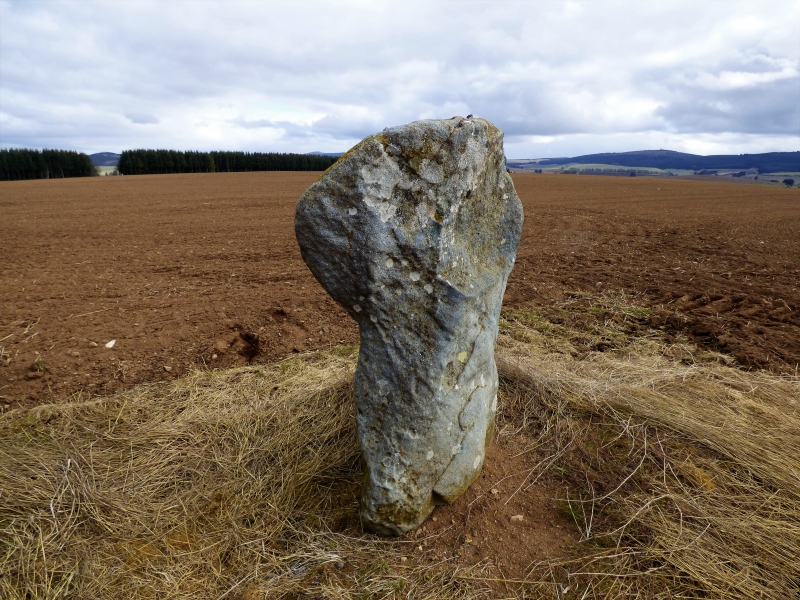 The monument comprises two Bronze-Age standing stones situated on the exposed brow of a hill, to the SSW of Ardlair.

The individual stones are aligned N-S, with their long sides facing each other. The stones align with a recumbent stone circle 220 m to the WNW. Pictish people reused the northern stone in the early medieval period (probably the 6th or 7th centuries AD), when they incised three symbol designs on it: the so-called elephant lies above a mirror, with a tuning fork to the right-hand side.

The area to be scheduled is lozenge-shaped on plan, to include the stones and an area around them in which evidence related to their construction and use may survive, as marked in red on the attached map.

Intrinsic characteristics: The stones have the potential to enhance the study of Bronze-Age communities and their ritual practices in Britain. Their proximity to the nearby Ardlair recumbent stone circle indicates that they are part of a wider ceremonial complex, either 'outliers', or the remains of a second stone circle, or part of a stone row that might even pre-date the stone circle.

The symbol-incised stone bears well-preserved carvings that have the potential to enhance the study of Pictish symbol stones, the development of Insular art in Britain and Ireland and technical aspects of carving stones in the early medieval period.

Very few symbol-incised stones still stand where they were first erected (for instance, this applies to only 4/43 examples in this area). As here, surviving examples show a preference for location on low knolls that form relatively prominent local features, and there is a recurring association with water.

The Picts used their unique symbols in a range of contexts, but we find the majority of surviving examples carved on stones, the earliest examples being on unshaped stones like that at Ardlair (around 200 examples survive). The meaning of the symbols is much debated, but they may represent personal names. The Ardlair symbol-incised stone provides evidence for the cultural links that existed between different parts of the British Isles in the early medieval period. While the symbol designs are unique to the Picts, their content provides evidence for how the art of the Picts relates to the Insular art style of this period, and the relationship to art in different media, such as metalwork. This provides important evidence for the relationship between the Picts and their early medieval neighbours.

The monument is recorded by RCAHMS as NJ52NE 3.

Allen J R and Anderson J 1903, THE EARLY CHRISTIAN MONUMENTS OF SCOTLAND: A CLASSIFIED ILLUSTRATED DESCRIPTIVE LIST OF THE MONUMENTS WITH AN ANALYSIS OF THEIR SYMBOLISM AND ORNAMENTATION, Edinburgh: Pt. 3, 505.

Jackson A 1984, THE SYMBOL STONES OF SCOTLAND: A SOCIAL ANTHROPOLOGICAL RESOLUTION TO THE PROBLEM OF THE PICTS, Kirkwall.