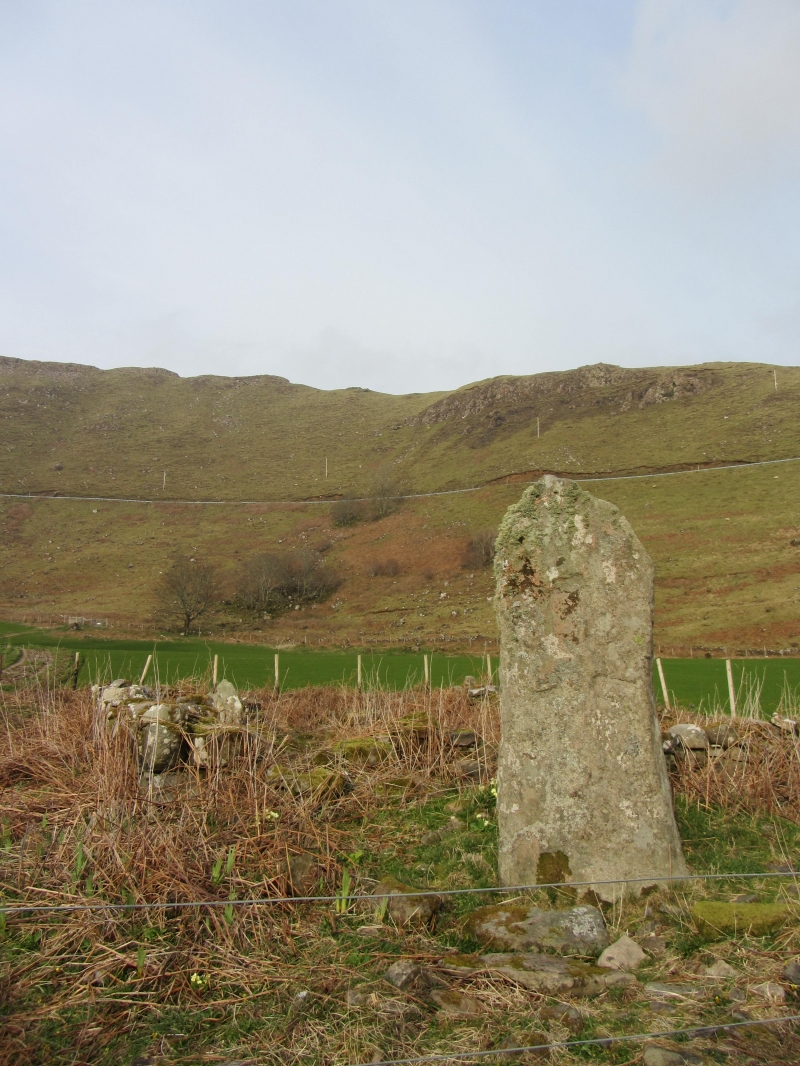 The monument comprises a burial ground of medieval or post-medieval date and a standing stone of prehistoric date.

The monument lies in an area of grassland at around 10m OD. It comprises a burial enclosure defined by a ruined stone wall and measuring about 8m NE-SW by some 6m transversely. The walls are about 0.5 m thick and stand to a height of about 1m. The entrance to the burial ground is in the NE wall.

Immediately to the SW of the burial ground there is a standing stone measuring approximately 2.3m in height and about 1m by 0.3m at the base. The stone was probably erected in the Neolithic or Bronze Age and relates to ritual activity of that date; it has been inscribed at a much later date with a cross and other motifs.

The burial ground may have been established in the eighteenth century for local Roman Catholics and there are a number of eighteenth-century grave stones inside. It is no longer in use.

The area proposed for scheduling comprises the remains described and an area around them within which related material may be expected to be found. It is 45m in diameter as marked in red on the accompanying map extract.

The monument is of national importance because of its potential to contribute to our understanding of medieval and post-medieval funerary practices and religion and prehistoric ritual practices.

RCAHMS (1980) The Royal Commission on the Ancient and Historical Monuments of Scotland. Argyll: an inventory of the monuments volume 3: Mull, Tiree, Coll and Northern Argyll (excluding the early medieval and later monuments of Iona), 126-8, No. 263, Fig. 158, Edinburgh.

Watson, W. J. (1926) The history of the Celtic place-named of Scotland: being the Rhind lectures on archaeology (expanded) delivered in 1916, 514, Edinburgh.