A Scheduled Monument in Girvan and South Carrick, South Ayrshire 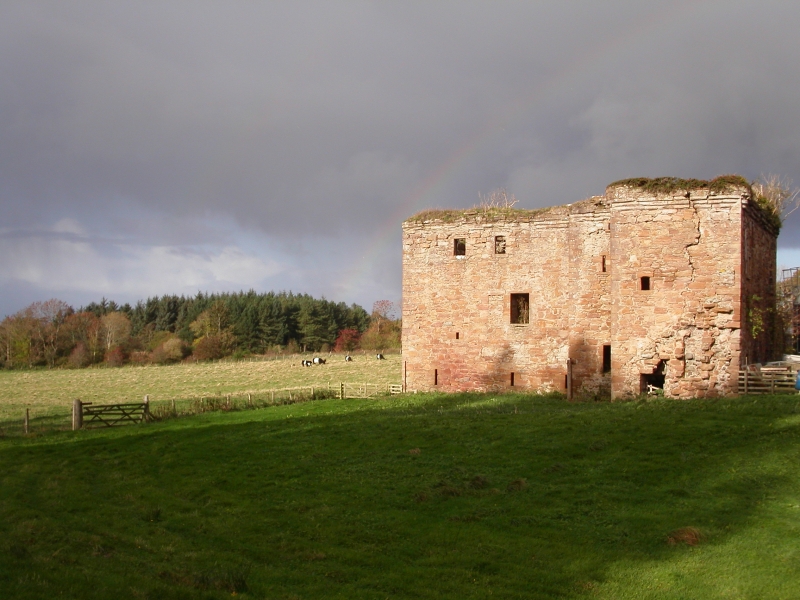 The monument comprises the substantial remains of a large L-plan castle probably dating from the beginning of the 16th century and believed to have been built for the family of Corry of Kelwood. It is said to have been inhabited until ca. 1800.

A small, square staircase tower stands in the re-entrant angle and rises to a corbelled-out parapet. An arched pend, still extant, leads through the smaller wing and would once have given access to the courtyard and, from the courtyard, to the main entrance in the stair tower. The basement floor contains four vaulted cellars in the main block and one in the wing.

The first floor appears to have been divided into a hall and private room in the main block, and a bedroom in the wing. Archaeological survey and monitoring undertaken during work to insert a pipeline to the W of the castle in 1997 revealed the presence of wall footings, one of which may be interpreted as comprising part of the castle's barmkin wall.

The area to be scheduled is nearly square in shape with maximum dimensions of 80m NE-SW by 80m NW-SE to include the castle and an area of ground around it within which associated remains are believed to survive. From the N-most point of the scheduled area the boundary runs along the W side of a stone boundary wall for 30m. The wall itself is excluded from the scheduling.

The scheduling boundary then runs for 3m along the S side of an adjoining wall. This wall too is excluded from the scheduling. The boundary then runs SE for 30m at a distance of 2m from the buildings which lie to the E of the castle. It then continues on the same orientation for a further 20m until it meets the field boundary which runs parallel to the road.

The boundary follows the line of the field boundary for 85m before turning NW for 80m. It then turns NE for 70m to meet the starting point. The area is marked in red on the accompanying map extract. Excluded from the scheduling are the pheasant runs which lie to the NW of the upstanding remains and the fence which lies to the W.

The monument is of national importance as the substantial remains of a 16th-century L-plan tower house which retains considerable potential to enhance our knowledge of Scottish domestic architecture of that period.