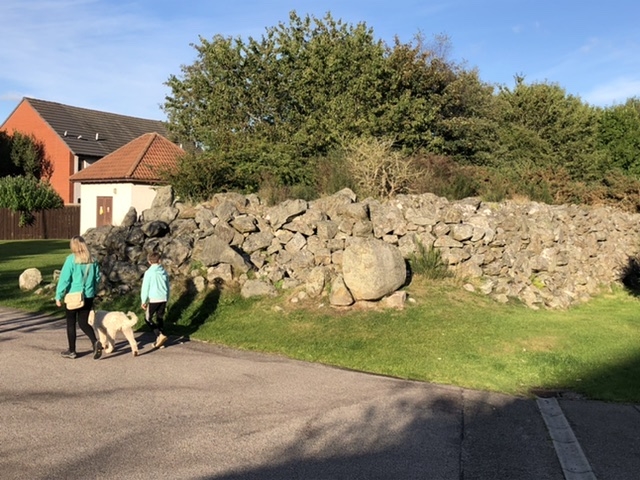 The monument comprises the remains of a consumption dyke at Kingswells, known as Rough's Cairn, after its creator Alexander Rough. The dyke is visible as two drystone structures, the E section of monumental scale. It lies around 150m S of Bucks Burn and around 1km NE of the Kingswells consumption dykes.

The consumption dyke is around 290m long E-W and around 30m long N-S on the eastern arm. The structure increases in height along its length, with the W terminal being around 0.5m high to, at the NE corner, around 5m tall. The dyke is around 8m thick at its widest point. The structure consists of 3-4 courses of squared boulders, with the remainder of the height being piled boulders. Originally the dyke existed as a single unit, but a small section of the arm running E-W was removed to allow a path to be laid through the line of the dyke, splitting the structure into two.

The area to be scheduled is irregular on plan to include the remains described, as shown in red on the accompanying map.

Rough's Cairn is an example of a consumption dyke, a type of field clearance unique to NE Scotland. Consumption dykes filled a dual role of clearing stone from the fields and also formed land boundaries. Rough's cairn appears to have been created around 1850 by Alexander Rough, the owner of Gillahill Farm, in order to clear the stone from two neighbouring fields. The two sections of the dyke survive well, with its structural elements apparently intact. The monumental scale of the dyke represents a large-scale undertaking, and the remains have the potential to tell us more about the construction and use of these monuments.

Consumption dykes represent a form of post-medieval agricultural improvements to permit the surrounding land to come into use for the increasingly intensive farming methods of the time. In the case of NE Scotland, the extremely high levels of stone in the soil resulted in the creation of a particular form of clearance, the consumption dyke, very different in character to the normal mound of piled stones away from tilled land. The consumption dykes typically filled a dual role, being not only clearance but also demarking the boundaries between land parcels, also increasingly important through post-medieval agricultural improvements. Around 120 consumption dykes are known in the Aberdeenshire area and they can greatly vary in form and size between examples. Of these, Rough's Cairn is one of the most substantial and, by far, the tallest. Also, in addition to the practical aspects of their construction, the monumental scale of the consumption dykes gave them a considerable presence in both the contemporary and modern landscape, and the largest would have been an impressive sight in the 18th- and 19th-century landscape of NE Scotland.

The area around Newhills and Kingswells is believed to be where the first consumption dykes of the area were erected, and three of the most impressive examples are found in the area, in Rough's Cairn and the Kingswells examples of East Dyke and Broad Dyke. Rough's Cairn is less carefully constructed than East or Broad Dyke, but is of similar monumental scale. The monument therefore has a high potential to inform us of the process of agricultural improvements in the area of Eastern Strathdon, the technological developments that influenced these and the place within this growing agricultural landscape that consumption dykes held.

The monument is of national importance because it has an inherent potential to make a significant contribution to our understanding of the past, in particular the agricultural improvements of the mid- to late 19th century and the influence on the landscape brought by these improvements, and the monuments created as a consequence. The study of consumption dykes can help us understand the origins of modern farming, land divisions and boundary features in NE Scotland. This particular example is of unique scale and form and, as one of the largest and best-preserved examples, it may hold valuable information regarding the origin and purpose of similar monuments in the area and further afield. The monument may also seal a buried land surface that could reveal valuable information about the environment and land use in the area at the time the monument was constructed. The loss of the monument would impede our ability to understand the nature of improvements that were the precursor to modern farming and the development of landscape in Scotland's NE coastal plain.

RCAHMS record the monument as NJ80NE 7.

RCAHMS 2007, IN THE SHADOW OF BENNACHIE: THE FIELD ARCHAEOLOGY OF DONSIDE, ABERDEENSHIRE, Edinburgh: Society of Antiquaries of Scotland.