A Scheduled Monument in Haddington and Lammermuir, East Lothian 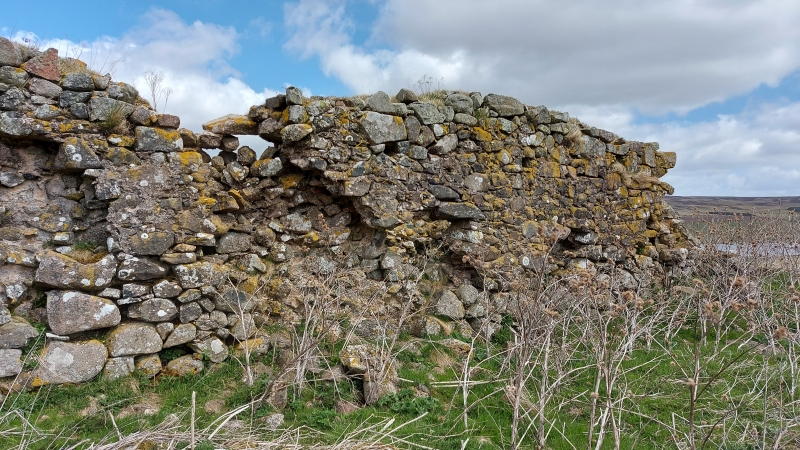 The monument consists of the remains of a monastic grange known as Penshiel. The present remains probably date from the 15th-century. The foundation is likely to pre-date the surviving ruin however: Penshiel is mentioned in a charter granted by the Earl of Dunbar to the monks of the Isle of Mey in AD.1200. It was later attached to Melrose Abbey.

The upstanding remains consist of the main building which measures 25.8m E-W by 7.8m N-S over walls 1.8m thick. The building (2.6m high) has had a vaulted ground floor and probably one upper floor. The walls are built of large rough boulders of greywacke and granite. The entrance is in the N wall, the door was fastened by three horizontal bars as indicated by the bar holes. Most of the outer facing stones have gone on the N side.

There have been two small windows in each gable but these are now indistinct and reduced to below sill level. There are a series of post holes in the exterior face of the S wall, about 2m from the ground which indicate that some sort of structure; ie a hoarding or stage was attached to the wall. To the S of the building is a rectangular enclosure or courtyard measuring 34m E-W by 26m N-S and bounded by the foundations of a wall about 0.9m thick.

To the N of the structure are the foundations of two buildings and walling, probably the remains of another courtyard measuring 26m E-W by 52.5m N-S. The area to be scheduled measures a maximum of 90m E-W by 120m N-S as marked in red on the accompanying map. Existing modern fences are excluded from scheduling.

The monument is of national importance because it is a good example of a centre of monastic retreat originating in the 13th century, although the upstanding remains are thought to be of 15th century date. As such it has the potential to yield information, through a combination of historical research and archaeological excavation, which is likely to increase our understanding of ecclesiastical architecture, the organisation and function of monastic communities, landuse, economy and material culture in Medieval Scotland.