Lime kilns, associated tramways, structures and other buildings at Llanymynech

A Scheduled Monument in Llanymynech and Pant, Shropshire 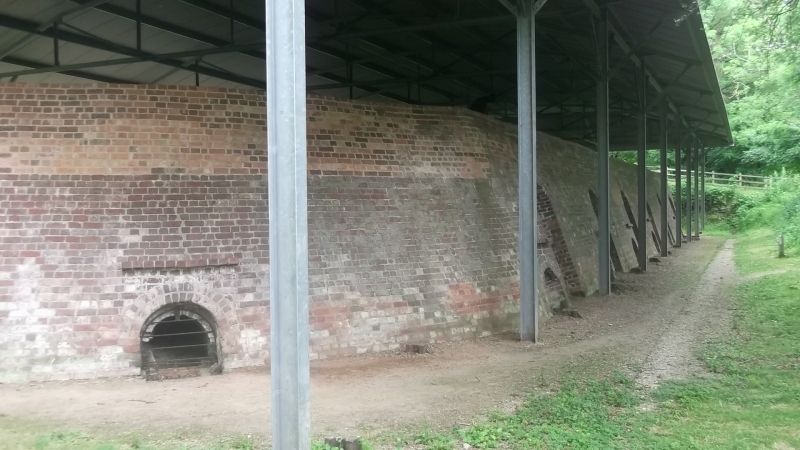 The monument includes a group of lime kilns, associated tramways, structures
and other buildings at Llanymynech. This industrial complex extends over
part of the south facing slope of Llanymynech Hill which itself has been
partly removed by the quarrying activities. Only a small part of the quarry
lies within England and in particular only a 170m length of the quarry face
forms part of this monument. A larger area of quarry floor complete with
small waste dumps and lengths of tramway embankment survives in Wales.

On the edge of the quarry are three separate lime kilns. These survive as
limestone rubble towers built into the side of the slope and containing two
or more bowl shaped brick lined kilns with a circular upper opening and a
second draw hole opening in the downslope side. Broken limestone and coal
were thrown into the upper openings to form alternate layers, whilst the
arched draw hole openings provided the necessary air flow for combustion and
access to the finished lime. These kilns were probably constructed in the
first half of the 19th century and may have continued in use until they were
replaced by the Hoffmann kiln in 1898. The limestone and coal would have
been transported to these kilns in wagons carried on a tramway system, much
of which still survives as embankments and cuttings. The burnt lime was
removed through the draw hole and carried in wagons on a tramway leading
either to the canal wharf or railway siding for loading onto barges or
trucks. The considerable difference in height between the upper quarry area
and the lower dispatch area meant that incline planes were needed to pull the
wagons up and down using gravity alone. This was achieved using drum houses,
one of which survives within the monument at NGR SJ26672171. The drum house
survives as a stone built structure with two 6m long parallel walls 2.2m
apart standing to a height of 3.75m. These walls are linked by two lateral
timbers and the remains of the braking system still survive. A lean-to
attached to the eastern wall of the house would have provided shelter for the
operator. The incline plane leading south from the drum house survives as a
clearly defined hollow denoted on either side by earthen banks. At the
foot of the incline plane the tramway passes under a stone bridge which still
carries the public highway between Welshpool and Oswestry. Beyond this the
tramway passes a tally hut where the contents of the wagons were recorded
before proceeding to the lower lime kilns, canal or railway. This two roomed
structure is brick built with a central chimney. Shortly after the tally hut
the tramway diverges, with the western branch leading to the canal wharf and
large draw kiln, whilst the eastern branch leads to the railway sidings and
Hoffmann Kiln. The large draw kiln includes two conjoined continuous
single draw limekilns. Both are of limestone rubble construction with brick
arched draw holes and the western one stands up to 8.5m high.

Immediately north east of these kilns is the large brick built Hoffmann Kiln
with its massive 140 foot high brick chimney. The kiln measures 44.8m long
by 17.5m wide, stands up to 3.4m high and has 14 chambers which were loaded
with limestone through the ground level arches. The interior of the kiln
takes the form of two parallel vaulted tunnels built side by side, connected
by curved tunnels at either end. The coal to fire the kiln was dropped in
through a series of small openings in the roof. The entire structure was
covered by a freestanding corrugated iron roof which no longer survives,
although at least one stanchion does. The Hoffmann kiln was built around
1898 and would have significantly increased the efficiency of the lime
burning operation at Llanymynech. The kiln was finally abandoned when lime
burning operations ceased in 1914.

Within the limeworks a number of further associated structures are known from
documentary and archaeological sources. The most prominent of these is the
stable block at NGR SJ26752117 in which horses used to pull the wagons were
housed. The building is believed to have been constructed around 1870 and
survives as a stone built structure with yellow brick-lined openings and
quoins. Its eastern elevation has a central doorway, with matching windows
and four ventilation slots, whilst on the north there is a loft opening and
three brick ventilation grids.

All modern trackway surfaces, protective fences, interpretation markers and
boards, benches, timber access stairs and temporary timber supports are
excluded from the scheduling, but the ground below them is included. The
stone bridge carrying the A483 over the monument is also excluded from the
scheduling, although the tramways below the bridge do form part of the
scheduling.

The lime kilns, associated tramways, structures and other buildings at
Llanymynech, together with adjacent Welsh quarries, form a particularly well
preserved and complete group of structures relating to a once relatively
widespread industry. In particular, the Hoffmann kiln represents the best
preserved example of its type in England and provides an additional component
found on very few other lime processing sites.