A Scheduled Monument in Betchworth, Surrey 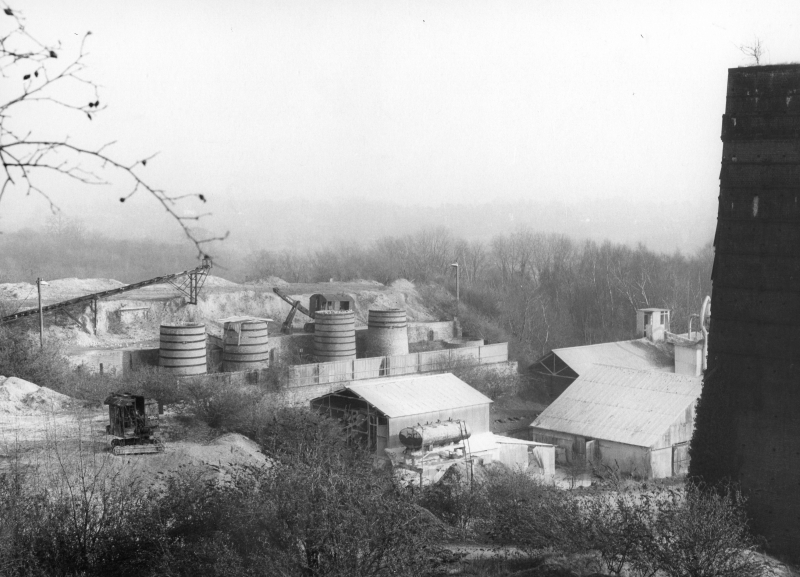 The monument includes a group of lime kilns at Betchworth Quarry, situated
in the Betchworth Hills on the south side of the North Downs. The standing
and buried remains of the lime kilns represent part of Betchworth Lime
Works, operated by the Dorking Greystone Lime Company from 1865 to 1959.
Lime burning ceased at the site in the 1970s. The lime kilns date from the
late 19th century and include the buried remains of two Hoffman kilns
(built 1865 and 1867), the standing remains of two batteries of flare
kilns (1867 and 1872) with later Dietzsch kilns (1887 and 1897), and a
Smidth kiln of about 1901, also still standing. All of the standing lime
kilns are Listed Buildings Grade II. The remains of other buildings
associated with the lime works, including a lime grinding building and
engineering works, are not considered to be appropriately protected by
scheduling and are therefore not included in the scheduled area.
The lime kilns are in four separate areas of protection. In the first
area, at the southern end of the site, is a battery of six flare kilns
aligned approximately east-west, built in about 1867. The kilns are
arranged in three pairs with an access tunnel serving each pair, opening
onto a railway platform on the south side where the quicklime was loaded
at a standard-gauge siding linked to the main Reigate-Reading line. On the
north side of the battery is a raised platform by which chalk was brought
to the kilns by narrow-gauge railway from the quarries to the north.
In 1887 the southern battery's westernmost kiln (no.1) was rebuilt to
create a pair of Dietzsch kilns, one each side of the earlier flare-kiln
chamber, which was adapted to serve as a lime discharge area. Ten years
later another pair of Dietzsch kilns was built at kiln no.3. Each pair of
Dietzsch kilns has a single brick tower enclosing two chimneys, one from
each kiln. Chalk was introduced into the chimneys at the upper level,
where it was pre-heated by gases rising from the kiln chambers below. At
the beginning of the 20th century a gantry was erected between the two
towers and chalk was delivered to the upper level by an aerial ropeway;
the remains of this gantry are still evident. Fuel was fed in at the
bottom of the pre-heating zone, i.e. at the shoulder of the tower, where
corrugated iron shelters provided cover for fuelling; parts of these
shelters also survive. The Dietzsch kilns went out of use in 1934.
The eastern half of the southern battery was altered in 1924 to house a
hydrator plant. The upper parts of kilns 4, 5 and 6 were demolished and
the lower parts linked together with their access tunnels to create a
basement for the plant. Although the upper parts of the plant have been
removed since its closure in 1960, parts of the plant structure are still
visible in kilns 4 and 5, together with some of the fixtures and fittings.
Finally, kiln 2 was adapted in 1938 as a separate-feed kiln; the
pulley-wheels and chain for operating the lifting door are still evident.
The second area of protection includes the eastern battery at Betchworth
Quarry, which is a rectangular building of brick and stone construction
aligned approximately north-south. It contains six kilns, originally built
about 1872 as flare kilns, arranged like the southern battery in three
pairs with a central access tunnel for each pair. Here the access tunnels
opened onto the western side of the battery where a lean-to provided
shelter for the loading of quicklime at the adjacent railway siding.
During the 1920s and 1930s the kilns were progressively rebuilt as
continuous-burning kilns of the Brockham-patent type, and the access
tunnels blocked up. While the northernmost kiln survives as a
Brockham-patent kiln, the remaining five were rebuilt in the 1950s-60s as
standard draw kilns. One of the kiln pots survives to its full height,
including the remains of a metal hopper through which the chalk was fed
into the kiln. On the eastern side of the battery is a raised platform on
which the chalk was delivered by narrow-gauge railway from the adjacent
quarry. The eastern battery remained in use until the 1960s.
The third area of protection is situated to the west of the eastern
battery, where a single brick tower represents a Smidth kiln of about
1901. This lime kiln was an experimental modification of the Dietzsch
kiln, comprising two chimneys encased in a single tower, but serving only
one firing chamber. Internal inspection of the kiln has demonstrated that
it was never fired. Above the firing chamber is an arched opening running
through the full width of the tower; this was the firing-floor from which
fuel was to be introduced directly into the chamber below. At the base of
the tower, now partly buried, are two archways through which the quicklime
was to be drawn off. The floor level of the kiln is thought to be about
4m-5m below the modern ground surface.
The Smidth kiln overlies the buried remains of an earlier lime kiln built
in 1867; the remains of a similar buried lime kiln, built in 1865, lie in
a fourth protected area approximately 100m to the north east. These are
the remains of the first two Hoffman kilns to be built in Britain, adapted
here for lime burning from an earlier German patent for brick making. The
Hoffman kiln was a `ring' kiln in which chalk was burned in a series of
adjoining chambers arranged in a circle. The base of the kiln was
originally below ground level, and, following later landfill activity in
both areas, the remains of the kilns are now buried even more deeply.

The standing remains of the lime kilns at Betchworth Quarry survive in
remarkably good condition, representing the rare survival of a wide
variety of kiln types at one site. The flare kilns in the eastern battery
are exceptionally well-preserved examples of industrial-scale flare kilns,
while the later Dietzsch and Smidth kilns are unique survivals in Great
Britain of kilns of those types. Their structures and fittings, together
with the artefactual remains preserved within them, demonstrate the
technological development of the lime burning industry at this site over a
period of over a century. Alterations to the southern battery in the 20th
century have resulted in the rare preservation of the remains of one of
the earliest known industrial-scale hydrating plants, together with a
separate-feed kiln of which very few examples are known to survive. As a
result of detailed documentary research, all of these developments are
quite well understood. Limited excavation of the kiln contents has
revealed a high level of preservation for kiln furniture and other
artefacts, while the burial of the two Hoffman kilns beneath later
landfill will have ensured the protection of these remains relatively
intact. The standing lime kilns are prominent landscape features which,
located adjacent to the North Downs Way, have the potential to serve as an
important amenity and educational resource.