A Scheduled Monument in Avonmouth and Lawrence Weston, Bristol 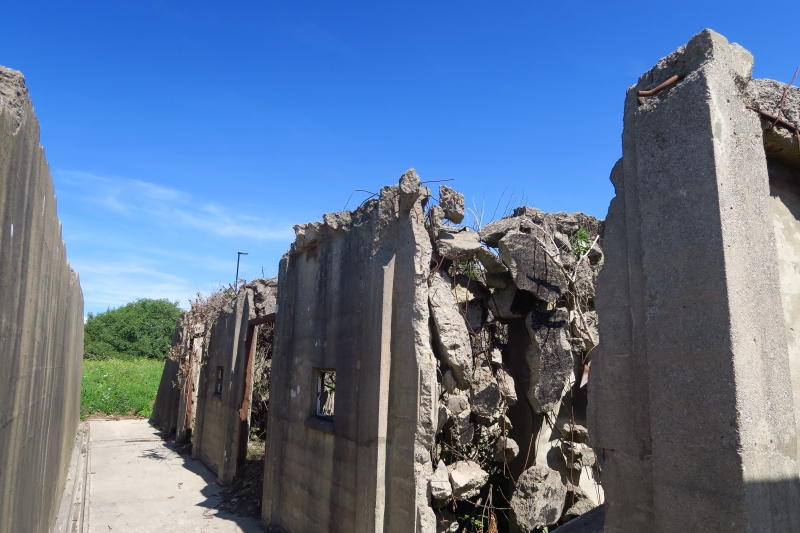 The monument includes a Heavy Anti-aircraft battery at Rockingham Farm,
approximately 3km north of Avonmouth. The site lies a short distance from
the coast and is bordered by a railway line on its west side and the A403
road on its east. To the south of the site are modern industrial units,
and to the north an area of marsh.

The site comprises a command post, four octagonal gunpits and a magazine.
The command post can be recognised, partially extant, as a rectangular
concrete structure, about 3m by 8m, at the centre of a semicircle formed
by the position of the gun pits. Earth banked against its sides is
contemporary with its wartime use. Further earthwork irregularities
covered by scrub growth are thought to be the remains of other parts of
the command post. There are four octagonal gunpits forming a semicircle
facing west, south west, north west and north. In three of the gunpits the
central area is mounded with spoil and covered in vegetation, so that the
condition of the concrete base and holdfast cannot be determined, but in
the fourth, the centre of the gunpit is clear, and the concrete base
appears to have been broken up. Iron hinges appear on the front segment of
most of the gunpits, and all concrete sides stand to approximately 1.5m
which appears to be their original height. No ammunition lockers could be
seen, but may survive under the earth and vegetation. At the rear of the
gunpits is the limber gunner's shelter, for gun maintenance or the gun
detachment. Each gun emplacement is protected by an earth bank. Other pits
to the rear of the gun arc may represent the position of Light
Anti-aircraft guns. The magazine survives, although somewhat damaged,
standing to approximately 2.5m high with iron reinforcing rods projecting
from the concrete. Parts of the concrete wall have been demolished, and
most of the roof removed, revealing the interior of the building. An
entrance doglegs into a corridor from which five rooms open. The magazine
is semi-sunken and protected by earth banks, with a space of about 0.6m
between the concrete and the bank.

Although of comparatively recent date, 20th century military sites are
increasingly seen as historic survivals representing a defining episode in the
history of warfare and of the century in general; as such they merit careful
record and, in some cases, preservation. One of the more significant
developments in the evolution of warfare during this period was the emergence
of strategic bombing in World War II, and this significance was reflected by
the resources invested in defence, both in terms of personnel and the sites on
which they served. During the war, the number of people in Anti-aircraft
Command reached a peak of 274,900 men, additional to the women soldiers of the
ATS who served on gunsites from summer 1941, and the Home Guard who manned
many sites later in the war. A national survey of England's Anti-aircraft
provision, based on archive sources, has produced a detailed record of how
many sites there were, where they were and what they looked like. It is also
now known from a survey of aerial photographs how many of these survive.
Anti-aircraft gunsites divide into three main types: those for heavy guns
(HAA), light guns (LAA) and batteries for firing primitive unguided rockets
(so called ZAA sites). In addition to gunsites, decoy targets were employed to
deceive enemy bombers, while fighter command played a complementary and
significant role. Following the end of World War II, 192 HAA sites were
selected for post-war use as the Nucleus Force, which was finally closed in
1955.
The HAA sites contained big guns with the function of engaging high flying
strategic bombers, hence their location around the south and east coasts, and
close to large cities and industrial and military targets. Of all the
gunsites, these were the most substantially built. There were three main
types: those for static guns (mostly 4.5 and 3.7 inch); those for 3.7 inch
mobile guns; and sites accommodating 5.25 inch weapons. These were all
distinct in fabric, though they could all occupy the same position at
different dates, or simultaneously by accretion. As well as the four or eight
gun emplacements, with their holdfast mountings for the guns, components will
generally include operational buildings such as a command post, radar
structures including the radar platform, on-site magazines for storing reserve
ammunition, gun stores and generating huts, usually one of the standard Nissen
hut designs. Domestic sites were also a feature of HAA gunsites, with huts,
ablutions blocks, offices, stores and amenities drawn from a common pool of
approved structures. Sites were often also provided with structures for their
close defence; pillboxes are the most common survivals, though earthwork
emplacements were also present. The layout of HAA gunsites was distinctive,
but changed over time, for example to accommodate the introduction of radar
from December 1940, women soldiers from summer 1941, and eight gun layouts
from late 1942.
Nearly 1,000 gunsites were built during World War II, and less than 200 of
these have some remains surviving. However, at only around 60 sites are these
remains thought sufficient to provide an understanding of their original form
and function. This includes 30 of the 192 examples which continued in use
until 1955. Surviving examples are therefore sufficiently rare to suggest that
all 60 well preserved examples are of national importance.

Despite some damage to the concrete structures, the Heavy anti-aircraft
battery at Rockingham Farm survives well, and represents the range of
structures originally present. It follows the classic layout of this type
of site, and all the expected elements including the command post at the
centre of the arc of four gunpits, with the magazine to one side remain
visible. It would appear that the site was abandoned in 1946, and, apart
from the damage noted above, there is no evidence that there has been any
intereference with the site since then. Therefore, it is thought that the
survival and archaeological potential will be good. The site is classed as
`near complete' in the gazetteer of HAA sites, one of only six such sites
in the former county of Avon.

Apart from its intrinsic value, the Heavy Anti-aircraft battery 520m east
of Holes Mouth forms part of a group of HAA emplacements defending Bristol
and the Severn Estury. These include five other sites in the Bristol area,
namely Lodge Farm, Portishead/Portbury, Gordano, Cribbs and Purdown. This
group of sites were constructed to safeguard crucial elements in the
defence of Britain against the threat of invasion during World War II, and
it is in this context that the true importance of this battery can be
recognised.