City Bridge at the junction of High Street and Bridge Street 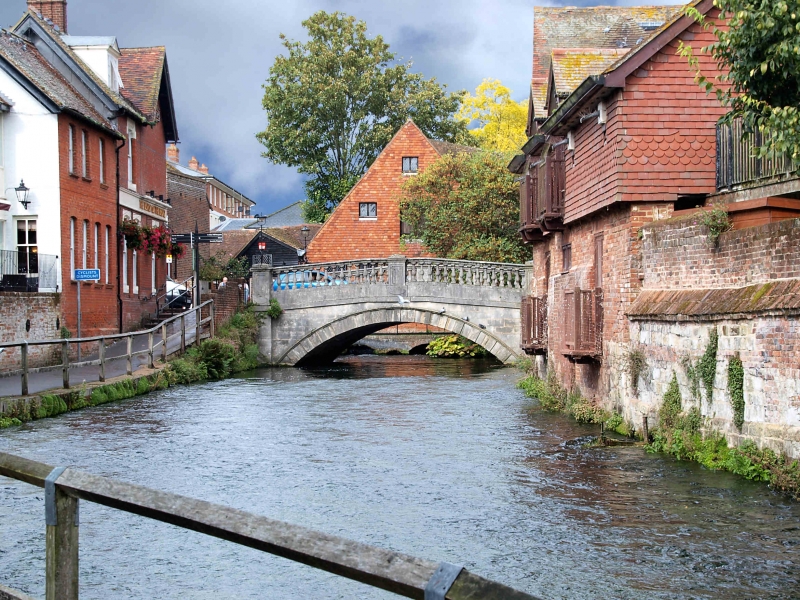 Entry Name: City Bridge at the junction of High Street and Bridge Street

The monument includes the City Bridge at the junction of High Street and
Bridge Street in Winchester, a 19th century single arch stone bridge
spanning the River Itchen. It is also known as St Swithun or Soke Bridge
and is Listed Grade I. The City Bridge occupies a strategic position at
the city's ancient crossing place and eastern entrance, and replaces at
least one earlier structure. Remains of a medieval bridge, including
three arches, survive underneath the road surface immediately east of the
current bridge, while medieval masonry, probably associated with the
bridge, remains embedded along the river at number 23 Bridge Street.
The City Bridge was designed by George Forder and built in 1813. It is
made of limestone ashlar masonry and consists of a single arch with
alternate projecting voussoirs capped by a small moulded string course. The
balustraded parapet is slightly humped with piers at the terminals and at
mid-span on each side. Some of the decorative panels on the piers carry
inscriptions, such as `Arms on the East gate, Duke of Albemarle',
accompanied by a coat of arms (on the western terminal downstream side),
and `The first city bridge built by St Swithun 852-863. This bridge built
1813'(central pier upstream side).
The scheduling includes a 15m margin to the east to protect the three
medieval arches underneath Bridge Street and a 10m margin to the south to
preserve in situ medieval masonry along the river. To the north and west
the margin measures 5m to preserve the relationship with associated
deposits.
Excluded from the scheduling are fences, sign and lamp posts, the modern
tarmac surfacing of the carriageway across the bridge, the parapet above
the level of the road surface, as well as the adjacent buildings, although
the bridge fabric below them is included.

The City Bridge at the junction of High Street and Bridge Street is well-
preserved and is largely unaltered since its construction in the early
19th century. Situated at the main crossing place of medieval Winchester,
the monument preserves archaeological deposits of significance, such as
the remains of a medieval bridge. Deposits underneath the foundations of
the bridge will contain valuable artefactual and environmental evidence
shedding light on the human and natural history of the site prior to
construction.