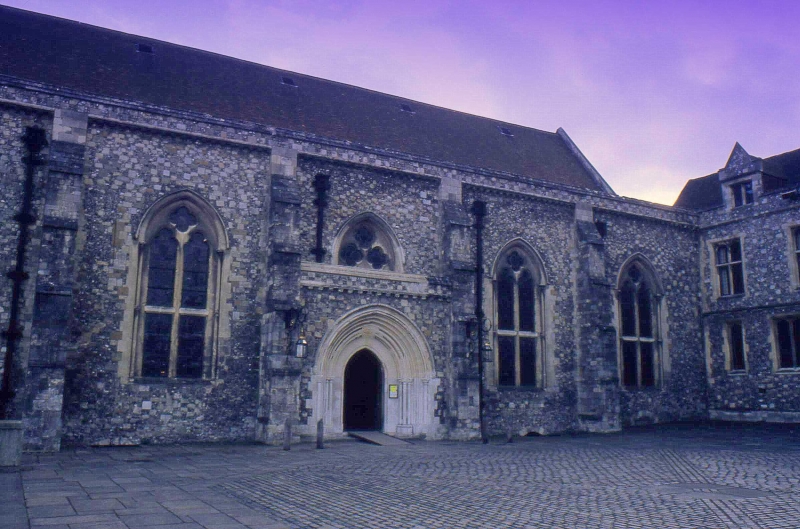 THE ROMAN DEFENCES
At the west and south of the site are the buried remains of part of the defences of the Roman city, which here formed a large salient about 244m long and 61m deep. Partial excavation (in Castle Yard, near the Great Hall) has recorded a low rampart upon which an earth wall was built in about the late C1 AD. This was replaced by a larger earthwork embankment, 18.3m wide and up to about 3.3m high, in about the late C2. Cut into this embankment is the early-mid C3 Roman city wall, which is 2.9m wide and built on a foundation of puddled clay. Underlying the buried remains of the Roman defences is an Iron Age ditch, approximately 8m wide and 3.5m deep, which originally formed the south side of a settlement enclosure known as ‘Oram’s Arbour’.

THE ROMAN AND EARLY MEDIEVAL CITY
The construction of the medieval castle saw the creation of an earthwork platform approximately 235m long from north to south and 68m from east to west, which buried the remains of the Roman and early medieval city beneath it. Partial excavation has recorded that structures and deposits relating to the Roman and early medieval city are preserved up to at least 3m below the modern ground surface. An intramural street has been identified, which is about 2m wide and runs north-east to south-west, parallel to the line of the Roman wall and 9m inside it. To the east is a north-south street, which was probably linked to the intramural street, and originally ran some 200m to the south wall of the city. Flanking this street are early medieval timber and masonry buildings. Partial excavation has revealed a stone building, which has walls constructed of coursed flint with Quarr stone quoins forming ‘long-and-short work’, standing 3m high beneath the medieval castle.

THE MEDIEVAL CASTLE
The earliest identified building relating to the medieval castle is an early Norman chapel built in about 1070. The northern third of the building was recorded through excavation, the remainder extending beneath the Great Hall. It is aligned broadly east-west with a rectangular nave, 11m long and approximately 7m wide, and a chancel formed of an apsidal east end extending 6m to the east. There are doorways in the north and west walls and wall benches against the internal walls of the nave. It is constructed in an Anglo-Saxon tradition with long-and-short work at the external angles of the nave.

The castle defences initially comprised the city defences on the north, west and south, and a bank and ditch topped by a timber palisade to the east. This palisade was later replaced with a stone wall. Partial excavation has recorded the northern extremity of the defences, which include a curtain wall with an internal projection, and an internal cross-wall built of flint rubble on a chalk foundation cut into the earlier bank. This formed a strong-point at the north end of the castle, dominating the West Gate of the city, and is thought to date to about 1169-71. Adjacent to this wall are the foundations of a late C12 keep, which is 15.9m square with foundations 4.6m thick and at least 5.5m deep. On the south side the foundations incorporate relieving arches. Attached to the keep at the west side are the north and south walls of another chapel. Immediately to the north is a round tower, which was built in 1222 at the northern apex of the castle. The remains of this tower have been partially uncovered and thus partly survive as upstanding remains. It is 12.8m in diameter and has flint rubble and limestone walls faced in ashlar. At basement level is a central chamber with entries to two sally-port passages which pass under the eastern and northern castle ditches, originally to issue on one side within the city and on the other outside the city to the west. A further passage at the south provided access via a flight of stairs from the eastern curtain wall. Built into the curtain walls that adjoin the circular tower are two garderobes.

The Great Hall of the castle remains upstanding and is situated about 40m to the south-west of the circular tower. It was built between 1222 and 1235, altered in about the mid- to late C14, and restored in 1873-4. The hall is a rectangular building of five bays, 34m long from east to west and 17m wide. It is built of flint rubble and limestone with limestone and ashlar dressings, a gabled tiled roof, and lead-covered lean-to side aisles. High up in the gables of the east and west walls are three stepped lancet windows, the lower parts of which have been blocked. On the north and south sides are two-light trefoil-headed windows with a plain transom and plate tracery pierced by a quatrefoil. Above these were originally circular windows but they have been moved and their stone frames incorporated into the walls between the trefoil-headed windows. Separating each of the bays are buttresses. The central window in the north wall, which uniquely has three quatrefoils within the plate tracery, has been truncated by a C19 pointed arched doorway of several orders. It replicates an original doorway in the south wall. Above the north and south walls were originally dormer windows but these were removed in about the C14 and replaced by a plain parapet supported on a corbel table. Internally the Great Hall is divided by a five bay arcade of two-centred arches into a central area, or ‘nave’, and side aisles. The arcades are supported on Purbeck marble columns. Covering the ‘nave’ is an open timber truss roof. In the east wall of the hall are two C19 pointed arches. At the north end of the west wall is an original pointed arched doorway. Mounted on this wall is the ‘Round Table’, traditionally associated with King Arthur but built in the late C13 or early C14. It was originally unpainted but the current scheme, which includes King Arthur in state with sword and orb, is one of the early C16, repainted in 1789. Next to the west wall is a bronze statue of Queen Victoria designed by Alfred Gilbert in 1897. The Great Hall is both Grade I listed and scheduled.

THE C17 ROYAL PALACE
The C17 royal palace known as the 'King's House' survives as buried remains. Partial excavation has revealed the foundations of the south and west wings. These wings have been shown to be 28m and 14.5m wide respectively.

Winchester Castle, a multi-period site encompassing part of the defences of the Roman civitas capital of Venta Belgarum (Winchester), part of the Roman and early medieval city, medieval Winchester Castle, and the C17 royal palace known as the 'King's House', is scheduled for the following principal reasons:
* Survival: archaeological remains relating to the early medieval and medieval periods survive particularly well, including archaeological structures and deposits stratified up to at least 3m deep and a substantive proportion of upstanding medieval fabric. The Great Hall is arguably the finest surviving medieval aisled hall in England;
* Potential: partial excavation has indicated that the monument retains a high degree of archaeological potential for buried remains dating from the Roman period onwards;
* Diversity: the multi-period remains demonstrate occupation of the site over an extensive period and will add to our knowledge and understanding of Winchester, a major urban centre for nearly 2000 years;
* Documentation (historical): Winchester Castle is well documented in historical sources, serving as one of the largest and most important of English royal castles.