A Scheduled Monument in Greasley, Nottinghamshire 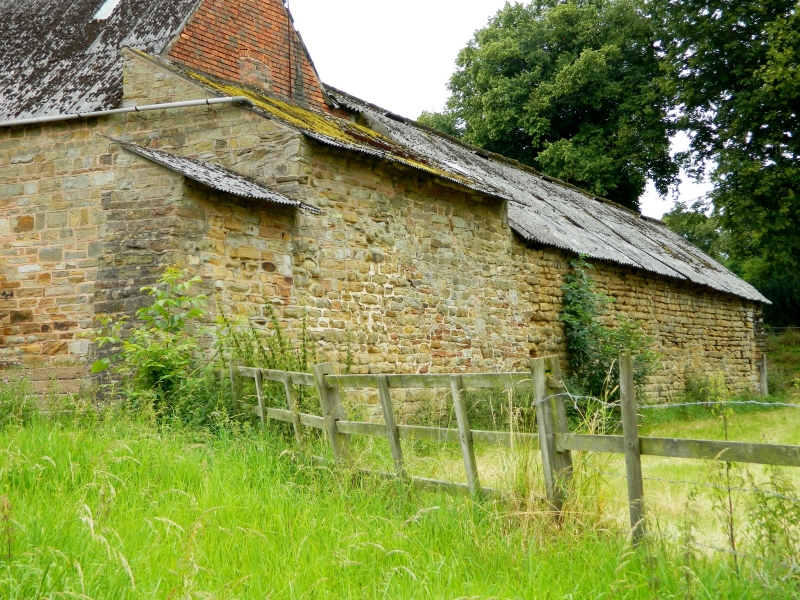 The monument includes the standing, earthwork and buried remains of Greasley
Castle and associated fishponds. It lies 100m above sea level on a south east
facing slope overlooking Gilt Brook. All the standing remains of the castle
are Listed Grade II and incorporated into the present farm buildings.

A document dated to between 1279 and 1321 records that Greasley, or Gryseleye
manor as it was then known, included a dwelling with outbuildings, a windmill,
a dovehouse, pasture protected by wood and other land assigned to its use. The
manor passed to Nicholas de Cantelupe in 1320 who was granted a licence to
crenellate from Edward III in 1340. It was from this time that the building
became known as a castle. Although described as a castle its position in the
landscape offers little military advantage and implies that the building was
more a statement of wealth and status. In form it is comparable to a range of
fortified houses. In line with other dignitaries of the time, Nicholas de
Cantelupe was keen to emphasize his position and soon after the granting of
the licence to crenellate built Beauvale Charterhouse just north of Greasley
Castle. One of the reasons for the founding of the Charterhouse was the
desire to ensure `the good estate of Archbishop Zouch' the founders `most dear
lord and cousin'. The charter was witnessed at Greasley on 9th December 1343
by the archbishop of York, the bishops of Durham, Lincoln and Litchfield
and the earls of Derby, Northampton and Huntingdon.

Following the de Cantelupe family Greasley fell into the hands of the Zouch
family who held it until 1485. At the Battle of Bosworth Lord Zouch took sides
with Richard III and was slain, his property forfeit to the crown. The
property was given to John Savage in 1486 but in 1608 was bought by Sir John
Manners.

It is unclear when or how the castle fell into disrepair but there is a
tradition which suggests Greasley was taken and overthrown during the Civil
War. In 1797 it was recorded that the property was totally destroyed bar all
but a wall or two.

The monument survives as a series of standing, buried and earthwork remains
surrounding Greasley Castle Farm. The surviving standing remains are
incorporated into the north, west and east ranges of the farm buildings to the
east of Greasley Castle Farm. The northernmost wall is approximately 30m long
and formed of irregularly coursed stone approximately 1.5m thick and 2m high.
At its western end are the remains of abutments and of a worked stone blocked
segmental arch. The arch is supported by modern rendered brickwork.
Excavations in 1933 revealed evidence of a round tower in this corner of the
wall and suggested that this was part of a curtain wall which surrounded the
fortified house. The curtain wall continues along the western wall for
approximately 5.5m. In the modern brick of the gable, in the north west corner
of the farm buildings, are a reused two light mullioned window and an
ornamental stone star.

A rectangular building, which forms the east range of the modern farm
buildings, is built of reused stone but incorporates short lengths of original
walling. A fine arched entrance with worn steps and the remains of a square
headed decorated window were revealed in the eastern wall during alterations
to the buildings. It is believed the doorway was the entrance to the hall from
the courtyard and implies the hall was approximately 10m wide although its
length is unknown. The barns are included in the listing for the remains
of Greasley Castle.

The standing remains of the castle are surrounded by extensive earthworks
which appear to represent several phases of activity on the site. The remains
of a dry moat approximately 1.5m deep are visible to the north and west of the
farm buildings but detail of this has been degraded by the modern road and the
access road to the farmyard. In conjunction with the standing remains these
earthworks probably represent the earliest phase of activity.

From both the north western and north eastern corners of the moat runs a flat
topped bank, forming a large sub-rectangular enclosure. The bank survives up
to 1.5m in height and 8m wide although its dimensions are not consistent. To
the east of the moat the bank has been degraded and truncated by the
straightening of the modern road but is clearly apparent to the east of the
farmyard entrance. To the west, the bank has been truncated by a graveyard
wall. The bank reappears at the south eastern corner of the graveyard and
continues in a south westerly direction for approximately 110m before turning
to the south east. There are no indications of a ditch on the north and east
sides but an outer ditch, approximately 1m deep, is evident along the western
and part of the southern side. This is partly obscured by a hedgerow. The
enclosure incorporates the moat and fortified house and is believed to have
enclosed the outlying buildings and domestic structures associated with the
manor. In its south eastern corner are the earthwork remains of a complex
series of fishponds, four in total with connecting sluices. These extend over
an area of approximately 80 sq m and survive up to 2.5m in depth. The ponds
were fed by a spring and drained off into a now dry and infilled channel
running from the south east corner of the ponds.

Aerial photographs taken in the mid-20th century show the sites of apparent
buildings within the enclosure particularly to the east of the current farm
yard. Here, the site of a building with a pond to the south and the whole
bounded by a bank and outer ditch are clearly evident. Earthworks survive up
to a height of 0.5m within this area but are more difficult to define clearly
from the ground surface.

To the west of the fishponds continuing to the western edge of the monument
and within the enclosure associated with the fortified house, are the
earthwork remains of part of a medieval open field system. These are visible
as part of at least one furlong (group of lands or cultivation strips) marked
by headlands. The cultivation strips collectively form ridge and furrow and
survive to a height of at least 0.25m.

Greasley Castle farmhouse and the mid-17th century font, which are Listed
Buildings Grade II, all modern fences, the tennis court, track and path
surfaces are excluded from the scheduling, although the ground beneath these
is included.

Medieval society was supported by a communal system of agriculture based on
large, unenclosed open arable fields. These large fields were subdivided into
strips (known as lands) which were allocated to individual tenants. The
cultivation of these strips with heavy ploughs pulled by oxen-teams produced
long, wide ridges and the resultant `ridge and furrow' where it survives is
the most obvious physical indication of the open field system. Individual
strips or lands were laid out in groups known as furlongs defined by terminal
headlands at the plough turning-points and lateral grass baulks. Furlongs were
in turn grouped into large open fields. Well-preserved ridge and furrow,
especially in its original context adjacent to village earthworks, is both an
important source of information about medieval agrarian life and a distinctive
contribution to the character of the historic landscape. It is usually now
covered by the hedges or walls of subsequent field enclosure.

The wealthier members of the community, in addition to regulating the communal
agricultural system, often maintained fishponds for their own private supply
of meat. Fishponds were an expression of wealth and status during the medieval
period and later and are usually attached to monastic institutions or the main
manorial complex.

The building of fishponds began in the medieval period and peaked in the 12th
century. The difficulty of obtaining fresh meat in the winter and the value
placed on fish in terms of its protein content and as a status food may have
been factors which favoured the development of fishponds and which made them
so valuable. The practice of constructing fishponds declined after the
Dissolution of the Monasteries in the 16th century although in some areas it
continued into the 17th century. Documentary sources provide a wealth of
information about the way fishponds were managed. The main species of fish
kept were eel, tench, pickerel, bream, perch and roach. Most fishponds were
located close to villages, manors or monasteries or within parks so that a
watch could be kept on them to prevent poaching. Archaeologically fishponds
are important for their association with other classes of medieval monument
and in providing evidence of site economy.

Greasley Castle is a relatively well-preserved and important example of a
fortified house. The standing, buried and earthwork remains will retain
important archaeological and environmental information. The fishponds, the
moat and the bank and ditch defining the larger enclosure, are particularly
conducive to the accumulation and preservation of artefactual, environmental
and ecofactual material and may retain important waterlogged deposits. The
importance of the site is increased by the survival of spatially associated
features. Taken as a whole Greasley Castle will contribute greatly to the
knowledge and understanding of fortified houses and their position in the
medieval and post-medieval landscape.