A Scheduled Monument in Shap, Cumbria 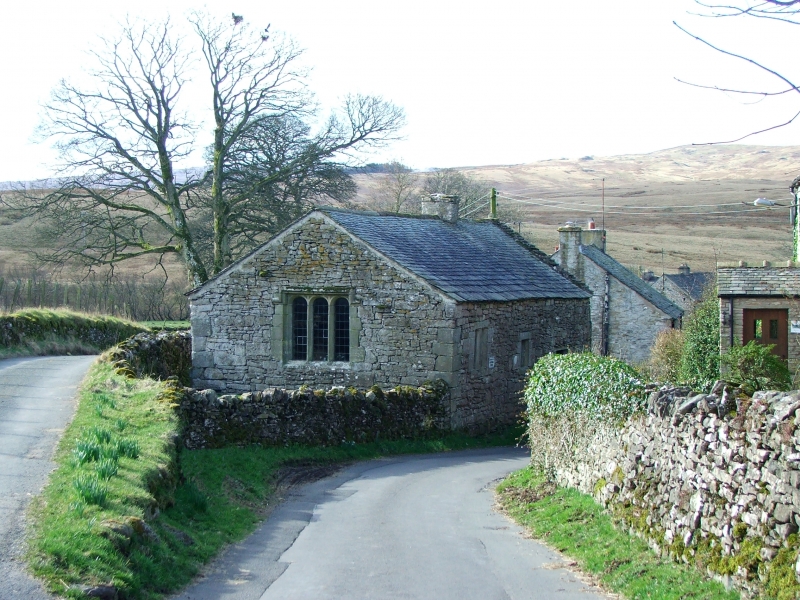 The monument includes Keld Chapel and its associated churchyard and
surrounding wall. It is located at the north east end of Keld hamlet
between Keld Lane and the access track to Thornship. The date of
construction of Keld Chapel is unknown; it may have been a medieval
chantry chapel of the nearby Shap Premonstratensian Abbey or it may have
been a simple chapel of ease with no connection to the abbey. The first
documentary evidence referring to Keld Chapel records a christening here
in 1672. Towards the end of the 17th century the chapel ceased to be used
for religious purposes and was converted into a house. In 1897 the
building was repaired and during the 20th century it was passed to
the National Trust.

Keld Chapel is constructed of limestone rubble with a slate roof. The
oldest masonry is thought to be the 16th century north east window which
has three elliptical-headed lights with a reset moulded label of earlier
date. In the north west wall are two square-headed windows, the eastern of
two lights the western of one light, together with a doorway with
chamfered jambs and a modern head. In the south east wall are two windows
similar to those in the north west wall; further south is a blocked window
thought to be of 18th century date. Internally there is a cross wall with
a fireplace and chimney stack inserted at the time the chapel was
convereted into a house. A recess has been set into this cross wall
immediately south of the fireplace. A small triangular area, thought to be
the churchyard, lies on the chapel's north east side surrounded by a
drystone wall. The chapel is a Listed Building Grade II.

A number of features are excluded from the scheduling. These include all
internal fixtures and fittings including pews, benches, altar table, a
chair, a wooden chest and the National Trust plaques on the wall and door
and the donation box set into the wall, although the door and wall behind
the plaques and surrounding the box are included.

Despite some internal modifications associated with the monument's
conversion to a domestic dwelling, Keld Chapel survives well and remains a
good example of a late medieval/early post-medieval small rural chapel.