A Scheduled Monument in East Hoathly with Halland, East Sussex 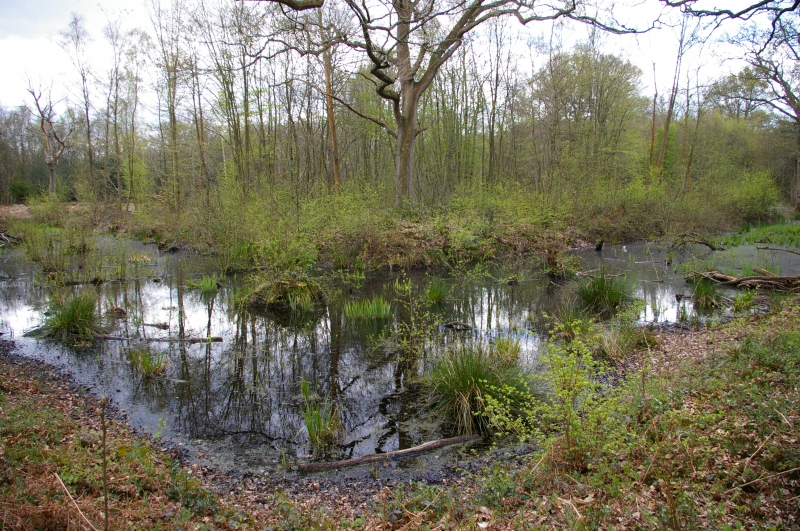 The monument includes a medieval moated site, situated on the south western
outskirts of East Hoathly village, on low lying ground which forms part of the
Sussex Weald.
The roughly north west-south east aligned moated site survives in the form of
earthworks and associated buried remains. The square, central island measures
around 35m across and is surrounded by a ditch, up to 19m wide and 1.3m deep.
The north western and north eastern arms of the moat remain partly water-
filled. Elsewhere, the ditch has become partly infilled over the years, and
contains a low, central bank in the south east, about 4m wide and 0.3m high.
The ditch was in turn surrounded by an outer bank, and sections of the bank,
measuring up to 6m wide and 1m high, survive around the western corner of the
moat and along its north eastern side. The eastern corner of the moat has been
partly disturbed by past modern drainage operations, and the outer bank has
been partly levelled by other activities, including the construction and use
of the footpaths on the north western and south western sides of the moat.
Although no upstanding remains of former buildings have been identified,
traces of buildings can be expected to survive as buried features beneath the
present ground surface of the central island.

Medieval rural settlements in England were marked by great regional diversity
in form, size and type, and the protection of their archaeological remains
needs to take these differences into account. To do this, England has been
divided into three broad Provinces on the basis of each area's distinctive
mixture of nucleated and dispersed settlements. These can be further divided
into sub-Provinces and local regions, possessing characteristics which have
gradually evolved during the last 1500 years or more.
This monument lies in the Eastern Weald sub-Province of the South-eastern
Province, bounded by the North and South Downs and comprising an oval
arrangement of inward facing escarpments of chalk and sandstone, separated by
clay vales, all ringing a higher sandstone ridge. Apart from concentrations of
nucleated settlements in the Vale of Holmsdale and around Canterbury, the sub-
Province is dominated by high and very high densities of dispersed
settlements, giving a countryside with farmsteads and associated enclosed
fields, of medieval foundation, intermixed with cottages, medieval moated
sites and hamlets bearing the names `green' or `dene'.

Around 6000 moated sites are known in England. They consist of wide
ditches, often or seasonally water-filled, partly or completely enclosing
one or more islands of dry ground on which stood domestic or religious
buildings. In some cases the islands were used for horticulture. The
majority of moated sites served as prestigious aristocratic and
seigneurial residences with the provision of a moat intended as a status
symbol rather than a practical military defence. The peak period during
which moated sites were built was between about 1250 and 1350 and by far
the greatest concentration lies in central and eaastern England.
However, moated sites were built throughout the medieval period, are
widely scattered throughout England and exhibit a high level of diversity
in their forms and sizes. They form a significant class of medieval
monument and are important for the understanding of the distribution of
wealth and status in the countryside. Many examples provide conditions
favourable to the survival of organic remains.
The moated site in Moat Wood, 580m east of Halland Park Farm represents
the predominant dispersed form of medieval rural settlement within the Eastern
Weald sub-Province and survives well, exhibiting little subsequent
disturbance. The monument will contain archaeological and environmental
evidence relating to the original use and abandonment of the settlement.