A Scheduled Monument in Stokeclimsland, Cornwall 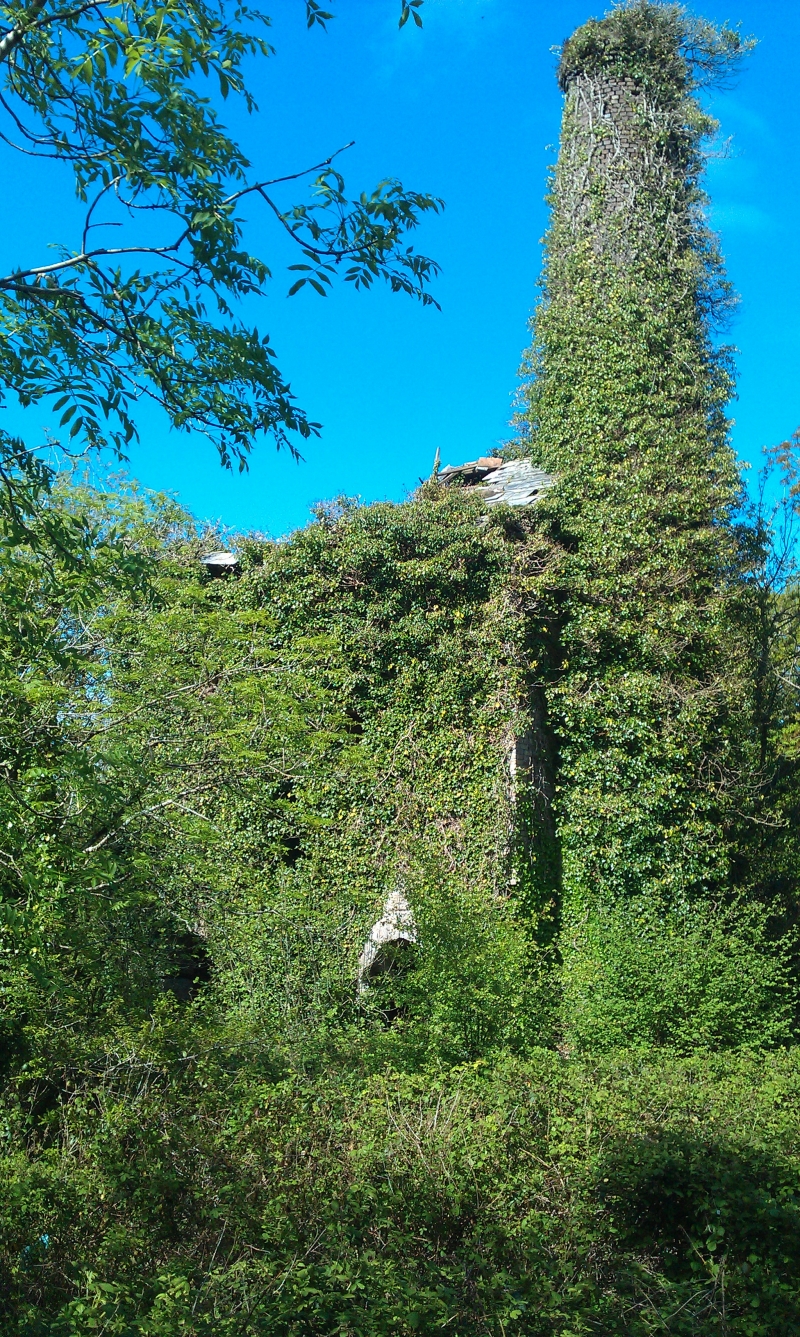 The monument includes an engine house, with adjacent boiler house,
loadings, raised platform and plinth, which powered mid- to later 19th
century winding operations in the Windsor Lane complex of the Holmbush
Mine, north of Kelly Bray near Callington in south east Cornwall. This
complex was part of the wider overall extent of the Holmbush Mine, a
copper, lead and arsenic mine operating mainly during the 19th century but
developed from earlier activity. The engine house in this scheduling is a
Listed Building Grade II.

Mining at Holmbush dates from at least the 17th century. By the 1820s
shafts were being sunk on the copper-rich Holmbush Lode in two areas: the
eastern, containing this scheduling, occupied the floor and western slope
of a narrow valley crossed by Windsor Lane, north west of Kit Hill; the
western area, the subject of a separate scheduling, was sited on an
adjacent ridge.

Prior to the mid-19th century, the Windsor Lane site formed the chief
operational centre for the mine and it remained the focus for ore
dressing, administration and service facilities throughout the mine's
active life though the principal pumping, winding and access provision
transferred to the mine's western area from the 1840s. From the 1830s the
mine produced large quantities of copper ore with some lead and silver
ore, complemented by arsenic after 1876 which rapidly became its most
profitable product. The mine's workforce and supply needs promoted growth
of the nearby settlement of Kelly Bray and, from 1872, the East Cornwall
Mineral Railway's terminus. The engine house in this scheduling is
situated on the valley floor north of Windsor Lane. Rectangular in plan,
8.25m long, NNW-SSE, and up to 6m wide externally, with walls 0.75m-1.12m
thick, it survives to full height with the rear gable, about 9.5m high, to
the south. It is built of local rubble with brick quoins and arches to
most door and window openings. Joist slots mark the levels of the first
and second half-floors: three timber joists and some floorboarding remain
in position from the first half-floor. The original roof timberwork
remains over the southern half of the roof, accompanied by most of its
original slate covering in that sector. Internally, behind the tall plug
doorway in the north wall, is a large timber beam which secured part of
the engine. The beam crosses the cataract pit which is backed by a
vertical revetment wall rising to the cylinder bed, with its bedstone in
situ, 1.25m across, retaining the iron sleeve of its north eastern
cylinder bolt. The engine house finally housed a 30-inch (0.76m) cylinder
engine on the mine's closure. Built centrally into, and projecting from,
the southern gable wall is the boiler house chimney, rising about 14m,
also rubble-built with a projecting brick-built coping ring. A rough hole
broken through to the engine house interior from the chimney base is a
later alteration.

Extending 7m north of the engine house is a depression 7m wide, crossed by
the NNW-SSE masonry and timber loadings for the crankshaft, now reduced
from their original height. In an area up to 6m further north, two
turf-covered ridges at right-angles to the loadings, with a hollow between
them, derive from the arrangements transferring power from the crankshaft.

Beside the east of the engine house and extending beyond it to the SSE is
the boiler house with a wider northern antechamber, their interiors
slightly sunken below ground level. The antechamber, considered to have
been a coal store, is 5.05m long, NNW-SSE, by 4.15m wide internally, with
walls 0.85m thick but reusing the engine house east wall for its west
side. Its north wall, with a doorway, abuts that of the engine house. Its
southern wall has been extensively dismantled and opens to the narrower
boiler house, 11.5m long, NNW-SSE, by 2.8m wide internally, appropriate to
house a single boiler and with walls 0.6m-0.7m thick but also reusing the
east wall of the engine house at the north of its west side. The boiler
house and antechamber walls survive extensively to 2.5m high, rubble-built
with brick-quoined openings. Extending west from the engine house is a
rectangular level platform, 13.5m long, NNW-SSE, by 8.7m wide, merging
with ground level on the south side but ending at a straight scarp edged
with masonry on the west and north sides, where it is up to 1.5m above the
valley floor. The north side of the platform extends 5m beyond the north
face of the engine house but is interrupted by a trough and steep slope
beside the crankshaft loadings. Beside this trough, the platform supports
a rectangular, granite-quoined plinth, 2.6m NNW-SSE, 1.65m wide and 1.6m
high; on the east of its upper surface are two studs, 1.1m apart. The
rectangular platform is directly aligned on, and midway between, the Wall
Shaft to the NNW and the Flopjack Shaft to the SSE. The platform is shown
with two parallel walls on the 1883 Ordnance Survey map, considered to be
the crank pit where rotative power from the engine house was converted to
horizontal motion, driving flat-rods that formerly extended to each shaft.

The development of the Windsor Lane complex, providing the context for the
construction and operation of this engine house, is evident from
documentary sources and depictions on successive maps and mine drawings.
The Stoke Climsland tithe map of 1841 shows the mine's main service
buildings on the valley's western lower slope, with two small buildings
beside the Wall Shaft on the valley floor. On an 1860s' sectional view of
the mine, `Wall's Engine Shaft' was served by an adjacent pumping engine
house with boiler house and chimney. From 1861, underground working from
Hitchen's Shaft, in the mine's western area, began development along a
second copper-rich lode, the Flopjack Lode, to the south of the original
Holmbush Lode. The Flopjack Shaft was sunk on this lode from the valley
floor at a point 175m SSE of the Wall Shaft. Both the Wall and Flopjack
Shafts appear on the 1883 Ordnance Survey map, by which time the pumping
engine complex specifically serving the Wall Shaft in the 1860s had been
removed and the engine house complex in this scheduling had appeared. By
1883 a roofed dressing floor had also appeared south east of the Wall
Shaft, with a tramway to the spoil dumps north east along the valley
floor.

In 1876, the Holmbush Mining Company had been formed to extract arsenic
ore which, by the early 1880s, had joined copper ore as the mine's chief
profitable products. By 1885 the mine achieved its highest annual
production of copper ore, but falling ore prices severely diminished its
value and greater profits were gained from arsenic production. In the
later 1880s the mine became increasingly uneconomic against cheaper ores
available from overseas; shaft-mining operations eventually ended in 1892,
followed by only limited and intermittent activity during the first half
of the 20th century.

By 1906 the Ordnance Survey map shows no evident ore-dressing structures
around the Wall Shaft and demolition had begun among the mine's service
buildings on the lower slope to the west, marking the start of
considerable modification and redevelopment which took place throughout
the 20th century over the site of the Windsor Lane complex beyond those
features in this scheduling.

For several millennia the south west peninsula has been one of the major
areas of non-ferrous metal mining in England, its more important and
prolific products including copper and tin along with a range of minor
metals and other materials, notably arsenic, which occur in the same ore
bodies. Before the 16th century, exploitation of this region's non-ferrous
metal resources almost exclusively involved tin. Extraction focussed along
valley floors and hillslopes on and around the granite uplands of the
south west where tin ore had accumulated after natural erosion from the
parent lodes. These accumulations were exploited by streamworks, using
carefully controlled flows of water to expose and then concentrate the
ore, leaving behind distinctively deepened valley floors with various
patterns of spoil heaps. By the early post-medieval period, most
substantial deposits susceptible to streamworking had long been exhausted
and exploitation transferred to the mineralised lodes themselves, a change
which marks the appearance of copper as an important product of the south
western mining industry. The early post-medieval exploitation of the lodes
was restricted by the ability to drain the cut, resulting in relatively
shallow workings directly into the lode exposures at the bedrock surface,
often by pits called lode-back pits and sometimes enlarged to form longer
openworks along the lodes.

By the 18th century, ore extraction and processing rapidly expanded to
meet growing demands, aided and promoted by technological development.
Surface workings became larger and more extensive, and deeper extraction
was achieved from shafts, the water pumped from larger mines by early
steam engines or drained through near-horizontal tunnels called adits
which also served to access the lodes. Horse-powered winding engines
lifted the ore from the shafts while larger and more efficient water
wheels served ore-processing areas. By such means, west Cornwall became
England's main producer of copper in the 18th-early 19th century.

Intensification accelerated in the late 18th-early 19th century with more
efficient steam-powered pumping engines allowing deeper shafts from which
extensive underground workings spread out. By the mid-19th century, steam
also powered winding and ore-processing operations, the engines, boilers
and ancillary machinery housed in distinctive masonry buildings grouped
around the main shafts and dressing areas. Later in the century,
compressed air was used for underground extraction equipment, fed from
steam-powered compressors on the surface. Ore-processing became
increasingly mechanised, along with the development of more effective
methods of separating and retaining different ores, particularly in the
production of arsenic which became a major saleable product in the 19th
century, adding a further range of distinctive processing and refining
components to some mines. With these advances, this area of east Cornwall
and west Devon became one of the world's main sources of copper and
arsenic ore until the later 19th century, while in west Cornwall, copper
ores became exhausted and replaced as that area's main product by the tin
ores present at deeper levels.

From the 1860s, the south western mining industries began to decline in
competition with cheaper sources of copper and tin ore overseas,
especially from South America, leading to a major economic collapse and
widespread mine closures in the 1880s, though limited ore-extraction and
spoil reprocessing continued into the 20th century.

The Windsor Lane rotative engine house at the Holmbush Mine survives very
well, complete with its adjacent boiler house, loadings and platform. Its
largely intact built structure, with little collapse and only minor
modifications from unintensive 20th century reuse, owes much to it being
one of very few 19th century engine houses to have retained a considerable
part of its original roof structure into the 21st century. The good body
of supporting documentation for this mine allows the development of the
Windsor Lane complex to be understood as well as the context for the
erection of this engine house within that development. The good survival
of this engine house also provides a tangible reminder of the ongoing
impact of the 19th century mining boom on settlement patterns, accounting
for the development of Kelly Bray, which remains a substantial settlement
in the landscape neighbouring this engine house.