Round barrow known as one of the Three Howes, 780m WNW of Teydale Farm 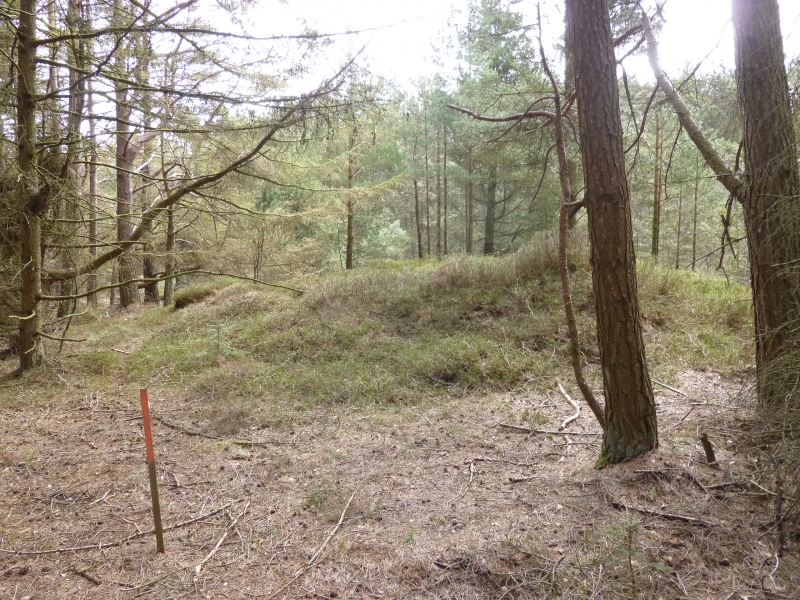 Entry Name: Round barrow known as one of the Three Howes, 780m WNW of Teydale Farm

The monument includes a round barrow which occupies a prominent ridge top
position in Harwood Dale Forest. It is situated on Middle Jurassic sandstone
towards the eastern edge of the North York Moors.
The barrow has an earth and stone mound which stands up to 1.2m high and
measures 13m in diameter. The mound was originally surrounded by a kerb of
stones which supported it and defined the barrow. However, over the years
these have been taken away or become buried by soil slipping from the mound so
that now only one is visible on the northern perimeter of the mound. The
centre of the mound has been hollowed out by partial excavation in the past.
The barrow is one in a line of three and lies in an area where there are many
prehistoric monuments, including further barrows as well as field systems and
clearance cairns.

Despite limited disturbance, the round barrow known as one of the Three Howes,
780m WNW of Teydale Farm has survived well. Significant information about the
original form of the barrow and the burials placed within it will be
preserved. Evidence for earlier land use and the contemporary environment will
also survive beneath the barrow mound. The barrow is one in a line of three.
Such clusters provide important insight into the development of ritual and
funerary practice during the Bronze Age. It is situated within an area which
also includes other groups of burial monuments as well as field systems and
clearance cairns. Associated groups of monuments such as these offer important
scope for the study of the distribution of prehistoric activity across the
landscape.