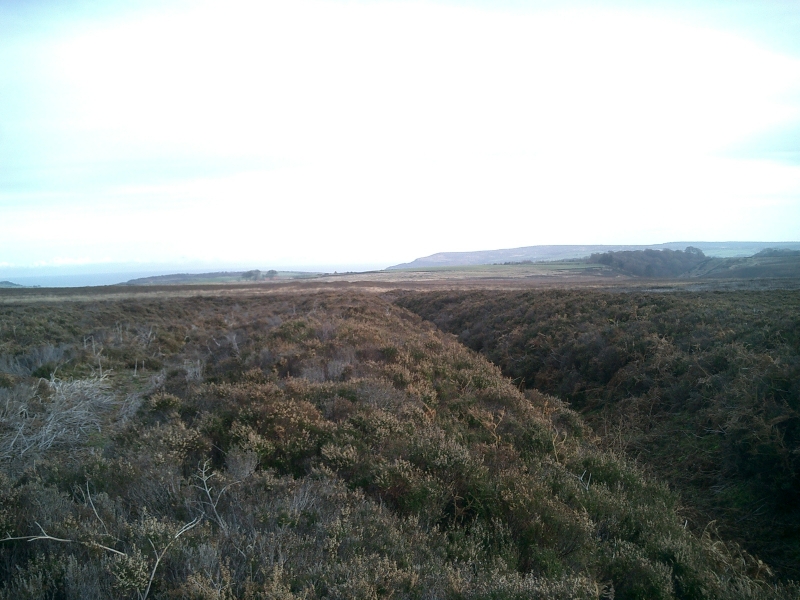 The monument includes earthwork and buried remains of a prehistoric cross dyke
and a series of standing stones standing on the dyke, one of which is known as
Old Wife's Neck. The monument is located on the southern part of Sneaton Low
Moor. This lies at the eastern side of the sandstone, heather covered moor
characteristic of the North York Moors. Today the moor is little used but
archaeological evidence indicates that this has not always been the case. The
prehistoric period in particular saw extensive use of the area for burials and
agriculture. Remains of these activities survive today.
The dyke extends east to west across a spur of land formed by the steep slope
of Iburdale to the west, a marshy area called Grey Heugh Slack to the east and
Biller Howe Dale to the south.
The dyke includes a series of banks and ditches up to 40m wide and 780m in
length. There are three parallel ditches up to 12m apart. The two outer
ditches have an earth and stone built bank along each side and the central
ditch has a bank on its northern side. The ditches range in size from 3m to 5m
in width and are up to 1m deep. The banks are up to 5m wide and up to 0.5m in
height. It was recorded in the 19th century that the most southerly bank had
at some time been faced with stone slabs, although no trace of these now
survive. There is a gap, 150m long, in the line of the earthworks 250m from
the west end; the reason for this gap is currently not known. There are
further minor breaks and irregularities elsewhere which may be partly due to
20th century military activity, as it is known that this area of the moor was
used for military training.
At least seven small standing stones survive along the length of the
earthworks. These stones are mostly located on the outer banks of the dyke. In
common with similar monuments on the North York Moors it is thought these
stones were part of an alignment of stones extending east to west as a
precursor to the dyke. This alignment of stones was later incorporated into
the substantial earthworks of the dyke. The largest of the standing stones,
known as Old Wife's Neck, is located at the southern edge of the dyke complex
and towards its western end. It stands 0.75m above ground level and is 0.70m
wide by 0.20m thick. The name comes from the profile which can be seen to
resemble a woman's head. Old maps show that a large number of tumuli lay to
the immediate north and south of the dyke. These are no longer clearly
identifiable and thus their nature and relationship with the dyke is not yet
fully understood.

The cross dyke survives well and significant information about its original
construction and function will be preserved. The standing stones provide
important evidence of the history and development of the boundary and offer
scope for the understanding of the division of land in the prehistoric period.