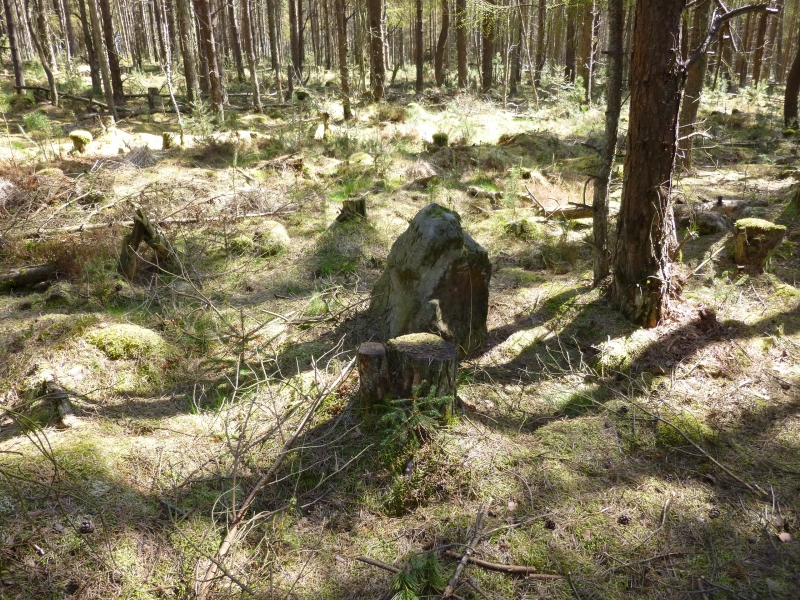 The monument includes a round cairn which is situated on Middle Jurassic
sandstone at the eastern edge of the North York Moors, on a gentle
south-facing slope.
The cairn has a stone mound which stands 0.3m high and measures up to 8m in
diameter. In the centre of the mound there is a modern disturbance which has
left a small hollow. Stones from the excavation of the hollow have been piled
together with others from the surrounding area to form a heap 0.6m high next
to the hollow.
The barrow lies in an area where there are many other prehistoric monuments,
including further barrows as well as field systems and clearance cairns.

Despite disturbance by forestry ploughing, the round cairn on Pye Rigg, 600m
SSE of Pye Rigg Howe has surviving archaeological deposits which will preserve
information about the original form of the cairn and the burials placed within
it. Evidence for earlier land use and the contemporary environment will also
survive beneath the cairn.
The cairn is the only one of a group of nine distributed along Pye Rigg to
survive forestry ploughing. It is situated within an area which includes other
burial monuments as well as field systems and clearance cairns. Associated
groups of monuments such as these offer important scope for the study of the
distribution of prehistoric activity across the landscape.