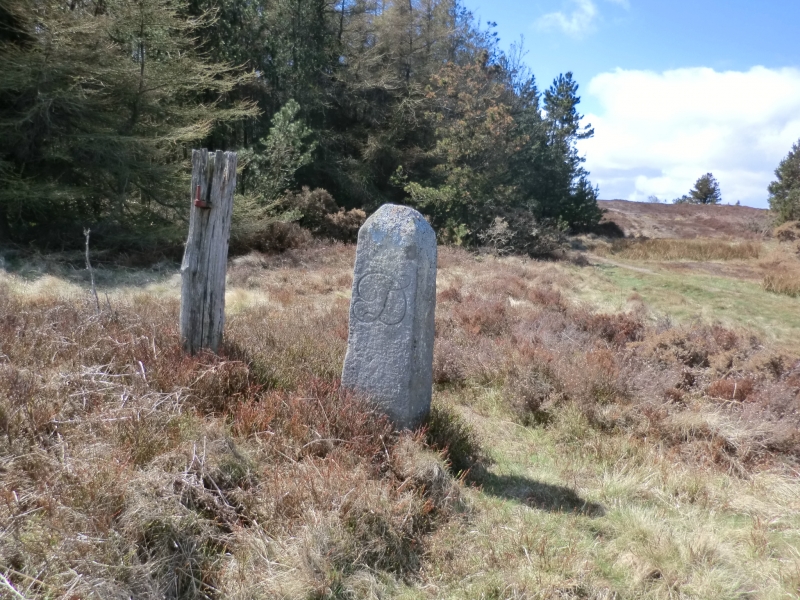 The monument includes the earthwork and buried remains of a dyke, known as
Green Dike, located on the eastern side of Howdale Moor overlooking the sea to
the north. Also included are a pair of post-medieval boundary stones.
The dyke is an early medieval estate boundary. It is thought to be one of the
boundary dykes forming the eastern side of the medieval estate of Whitby
Strand laid out in around AD 660 by Lady Hilda, the founding Abbess of Whitby
Abbey. It is one of a series of boundary features in the area which divided
the land into discrete territories. Some of these divisions have their origins
in the prehistoric period and continued in use into the medieval period and
beyond. The dyke was in use in the post-medieval period as an estate boundary
as evidenced by the stone estate markers on the northern end of the dyke and
to the south of the dyke at Three Lords' Stones. The latter pair of boundary
stones lie beyond the surviving remains of the dyke and are not included in
the scheduling. The use of the dyke as a territorial marker continues today as
the parish boundary extends along the length of the dyke.
Starting from a point 150m down the steeply sloping northern edge of the
moor, the surviving remains of the dyke extend southwards for 250m then
continue south for a further 980m across the eastern slope of the moor to
terminate just short of the woodland plantation at Pye Rigg End. The dyke
includes a single ditch with substantial flanking banks. The ditch is up to
3m wide and the current base is up to 2m below the top of the banks. The banks
are up to 4m wide and 0.75m high. At the northern end the dyke originally
continued northward down the slope and across the coastal shelf to the cliff
edge 900m away but this section has been disturbed by 19th century alum
quarrying and the extent and nature of any surviving remains is currently
unknown. At the southern end, the dyke continued south to the head of
Staintondale but this section has been disturbed by forestry and agricultural
activity and the extent and nature of any surviving remains is currently
unknown. The dyke is breached where the road from Ravenscar crosses it,
however, the ditch survives below the road as a buried feature.
The post-medieval boundary stones stand on the banks at the northern end of
the dyke. One stone has the letter `D' carved upon it and the other has an
equal armed cross. These boundary markers were probably, like others on the
moors, erected after the 18th century enclosure acts.
All fences, the stone wall extending along the dyke and the surface of the
road are excluded from the scheduling, although the ground beneath these
features is included.

Cross dykes are substantial linear earthworks, typically between 2.2km and 1km
long and comprising one or more ditches arranged beside or parallel to one or
more banks. They generally occur in upland situations, running across ridges
and spurs. They are recognised as earthworks, as cropmarks on aerial
photographs, or as combinations of both. The evidence of excavation and
analogy with associated monuments demonstrates that the period of construction
of many cross dykes spanned the millennium from the Middle Bronze Age. Others
are known to have had a function in the Middle Ages; without excavation it is
difficult to determine whether this indicates reuse of earlier dykes or the
construction of new ones during the medieval period. Current information
favours the view that they were used as boundary markers, probably demarcating
some form of land allotment, although they may also have been used as
trackways, cattle droveways or defensive earthworks. Cross dykes are one of
the few monument types which indicate how land was divided up, whether in the
prehistoric or medieval period. They are of considerable importance for the
analysis of contemporary settlement and land use patterns. Relatively few
examples have survived to the present day and hence all well preserved
examples will merit statutory protection.

The medieval dyke known as Green Dike, survives well and significant evidence
of its original form and function will survive. It offers important scope for
the study of territorial boundaries from the prehistoric period through the
medieval and beyond.