A Scheduled Monument in Hawick and Hermitage, Scottish Borders 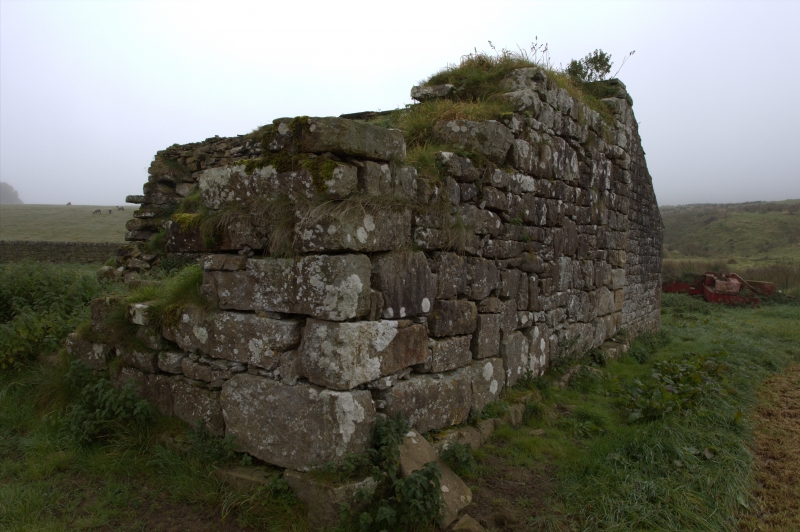 The monument includes the upstanding and buried remains of a medieval bastle
known as Stonehouse Tower. It is located on the flood plain 140m east of
Liddel Water, which here forms the boundary between England and Scotland, and
is constructed of roughly squared and roughly coursed rubble, for the most
part with uniform quoins. The bastle measures approximately 10.7m by 8.7m with
walls 1.3m thick. The south east and south west walls survive up to about 3.6m
high and contain two narrow vent slits and a square recess thought to have
been used as a cupboard. The south west end wall has the remains of a corbel
which may have supported a hearth on the upper floor. Only the foundations and
lower course of the north east and north west walls survive.
A modern stone-built lean-to on the bastle's south east side is excluded from
the scheduling, although the ground beneath this feature is included.

Bastles are small thick-walled farmhouses in which the living quarters are
situated above a ground floor byre. The vast majority are simple rectangular
buildings with the byre entrance typically placed in one gable end, an upper
door in the side wall, small stoutly-barred windows and few architectural
features or details. Some have stone barrel vaults to the basement but the
majority had a first floor of heavy timber beams carrying stone slabs. The
great majority of bastles are solitary rural buildings, although a few
nucleated settlements with more than one bastle are also known. Most bastles
were constructed between about 1575 and 1650, although earlier and later
examples are also known. They were occupied by middle-rank farmers. Bastles
are confined to the northern border counties of England, in Cumbria,
Northumberland and Durham. The need for such strongly defended farmsteads can
be related to the troubled social conditions of the later Middle Ages, which
in these border areas lasted until (indeed after) the union of the English and
Scottish Crowns in 1603. Less than 300 bastles are known to survive, of which
a large number have been significantly modified by their continuing use as
domestic or other buildings. All surviving bastles which retain significant
original remains will normally be identified as nationally important.

Stonehouse Tower medieval bastle is one of a number of bastles located close
to the Scottish border. As such it will contribute greatly to our knowledge
and understanding of the wider border settlement and economy during the
medieval period.