A Scheduled Monument in Arne, Dorset 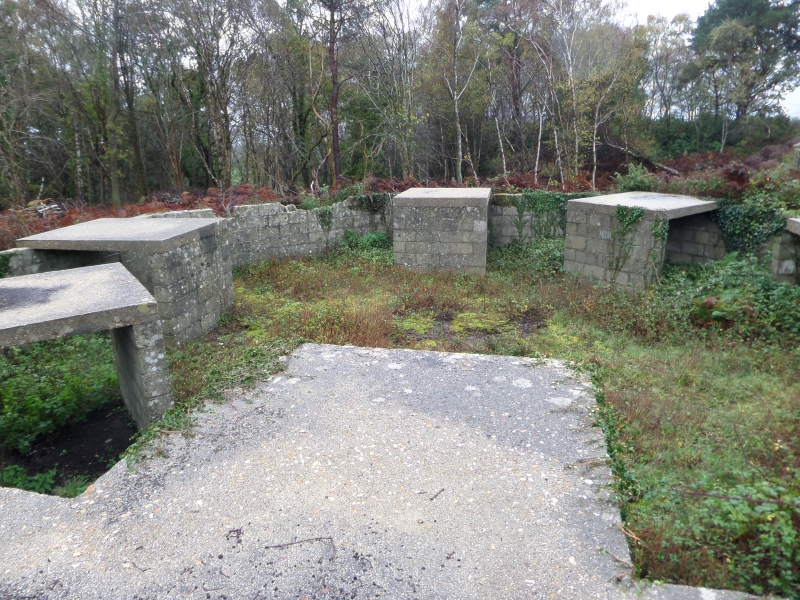 The monument includes a Heavy Anti-aircraft (HAA) battery located on Arne
Hill, a ridge on a peninsular situated on the south western edge of Poole
Harbour.
The HAA battery represents part of a group of five similar sites which were
designed to provide defence against airborne attack for the Royal Naval
Cordite Factory (RNCF) at Holton Heath (situated approximately 3km to the
north west) during World War II. Three of the HAA batteries were situated on
the Arne peninsular, while the remainder were situated to the north west and
north east of the factory site.
The battery consisted of a central control block, aligned north west by south
east, built of brick elevations with a reinforced concrete roof. It was
flanked by four gun emplacements to the south east; these were arranged in a
semicircle and faced Poole Harbour. The emplacements, which are built of
reinforced concrete, are hexagonal in plan. Each has inbuilt lockers and
ammunition stores and access was by means of a single entrance. A gun was
mounted in the central area of each emplacement. The guns were removed after
the war, but iron mounts and runner tracks are still visible within each
emplacement.
Records indicate that the battery was operational between 1940 and 1944, when
it was manned by 328 Battalion from 104 Regiment, and that the battery was
installed with two 3 inch guns in 1941. However, the presence of four gun
emplacements indicates that the battery was remodelled after 1941, when it is
likely that four 3.7 inch guns were then installed as surviving records
indicate was the case at other HAA sites within the Holton Heath group, such
as at Slepe (near Wareham) and Upton (near Poole).
To the north of the control block are a series of artificial terraces. These
are likely to mark the sites of Nissen Huts and associated structures which
served the domestic needs of the occupying unit. This area may also have
supported the radar equipment which is known from records to have been
installed at this site.

Although of comparatively recent date, 20th century military sites are
increasingly seen as historic survivals representing a defining episode in the
history of warfare and of the century in general; as such they merit careful
record and, in some cases, preservation. One of the more significant
developments in the evolution of warfare during this period was the emergence
of strategic bombing in World War II, and this significance was reflected by
the resources invested in defence, both in terms of personnel and the sites on
which they served. During the war, the number of people in Anti-aircraft
Command reached a peak of 274,900 men, additional to the women soldiers of the
ATS who served on gunsites from summer 1941, and the Home Guard who manned
many sites later in the war. A national survey of England's Anti-aircraft
provision, based on archive sources, has produced a detailed record of how
many sites there were, where they were and what they looked like. It is also
now known from a survey of aerial photographs how many of these survive.
Anti-aircraft gunsites divide into three main types: those for heavy guns
(HAA), light guns (LAA) and batteries for firing primitive unguided rockets
(so called ZAA sites). In addition to gunsites, decoy targets were employed to
deceive enemy bombers, while fighter command played a complementary and
significant role. Following the end of World War II, 192 HAA sites were
selected for post-war use as the Nucleus Force, which was finally closed in
1955.
The HAA sites contained big guns with the function of engaging high flying
strategic bombers, hence their location around the south and east coasts, and
close to large cities and industrial and military targets. Of all the
gunsites, these were the most substantially built. There were three main
types: those for static guns (mostly 4.5 and 3.7 inch); those for 3.7 inch
mobile guns; and sites accommodating 5.25 inch weapons. These were all
distinct in fabric, though they could all occupy the same position at
different dates, or simultaneously by accretion. As well as the four or eight
gun emplacements, with their holdfast mountings for the guns, components will
generally include operational buildings such as a command post, radar
structures including the radar platform, on-site magazines for storing reserve
ammunition, gun stores and generating huts, usually one of the standard Nissen
hut designs. Domestic sites were also a feature of HAA gunsites, with huts,
ablutions blocks, offices, stores and amenities drawn from a common pool of
approved structures. Sites were often also provided with structures for their
close defence; pillboxes are the most common survivals, though earthwork
emplacements were also present. The layout of HAA gunsites was distinctive,
but changed over time, for example to accommodate the introduction of radar
from December 1940, women soldiers from summer 1941, and eight gun layouts
from late 1942.
Nearly 1,000 gunsites were built during World War II, and less than 200 of
these have some remains surviving. However, at only around 60 sites are these
remains thought sufficient to provide an understanding of their original form
and function. This includes 30 of the 192 examples which continued in use
until 1955. Surviving examples are therefore sufficiently rare to suggest that
all 60 well preserved examples are of national importance.

The Heavy Anti-aircraft battery on Arne Hill is well-preserved and includes
surviving remains of the associated domestic structures. The site represents
the only survival of a HAA battery within the group which originally served
the RNCF at Holton Heath and it also represents one of very few examples of
this class of site known to survive within Dorset.