Lock up known as The Round House, at the junction of Church Street and St Matthew's Avenue

A Scheduled Monument in Worthington, Leicestershire 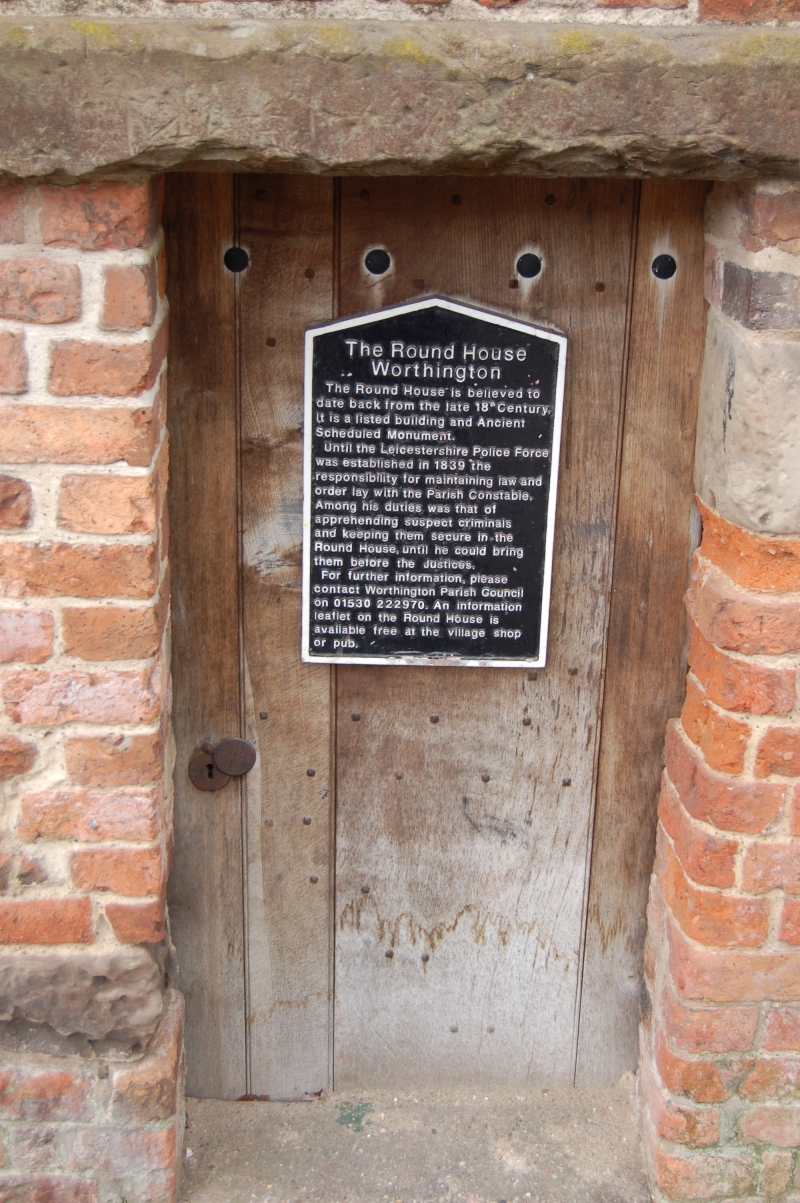 Entry Name: Lock up known as The Round House, at the junction of Church Street and St Matthew's Avenue

The monument includes a lock up known as the Round House, located at the
junction of Church Street and St Matthew's Avenue.
The lock up is octagonal, of red brick with an octagonal brick spire. It
measures approximately 3m across with 1.5m high walls surmounted by a
projecting stone string course. The octagonal brick spire is approximately
3.5m high and tapers to a stone finial. The overall height of the lock up is
approximately 5m. A doorway set into the full height of the northern face of
the wall is fitted with a timber door with an information panel. A window
opening measuring 0.35m by 0.15m is located on the eastern face. This opening
utilises the string course as a lintel and has an overly large stone sill
which measures approximately 1.15m by 0.23m.
The lock up is believed to date from the late 18th century. It is a Listed
Building Grade II.
All modern made up surfaces are excluded from the scheduling although the
ground beneath them is included.

Lock ups, also known as round houses, blind houses and clinks, are temporary
holding places for offenders being brought before the magistrate. Sometimes a
cell was located in or under a public building, but most lock ups were purpose
built, usually small square, rectangular, octagonal or occasionally circular
stone buildings. Most were windowless with one or two ventilation grilles,
often set under the eaves or into the single door. The earliest recorded lock
up dates from the 13th century, and most fell out of use when police stations
with their own holding facilities were established. Less than 300 lock ups are
currently recorded nationally, mostly grouped in clusters such as in Essex,
West Yorkshire and Derbyshire, with the highest concentrations in Wiltshire
and Somerset. In some counties, such as Hampshire, there are no recorded
examples.

The lock up known as The Round House, at the junction of Church Street and St
Matthew's Avenue survives as a well preserved example of a monument class
which was once common. It serves as a visual reminder of 18th and 19th century
penal custody measures. The lock up was used for the punishment and
incarceration of local offenders, often for minor crimes, which may or may
not have been through the legal process. Another use was as a local holding
cell for those due to go to the quarter sessions. As such it is an important
relic of a less institutionalised system of punishment.