Grace Dieu Priory with two ponds and a fishpond, Belton

A Scheduled Monument in Belton, Leicestershire 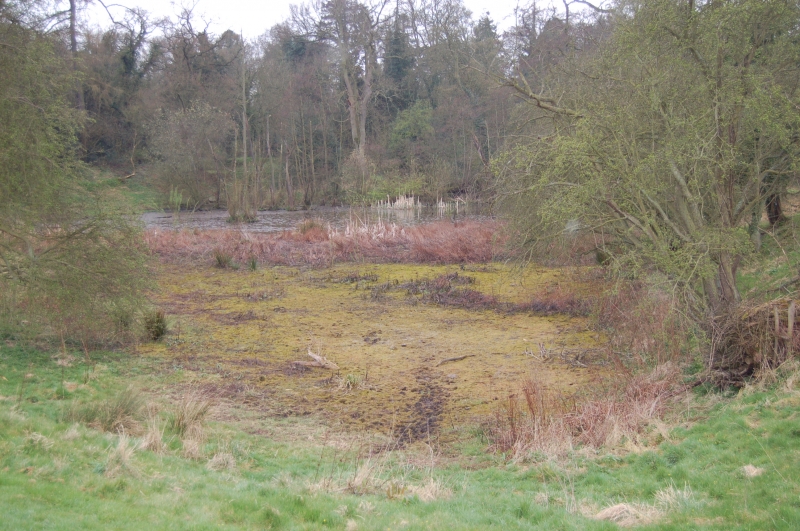 Grace Dieu Priory was an Augustinian nunnery which later became a Tudor
mansion. It includes extensive ruins of the priory buildings, which are a
Grade II listed building, surrounded by a complex of earthworks. These
include two ponds, a fishpond, and a substantial section of boundary ditch and
wall situated alongside the Grace Dieu Brook running on the western side of
the site.

The priory buildings occupy an area of 90m x 50m, the ruined walls of which
stand to an average height of 8m-10m. The cloister measures roughly 25m
square and has a large arch leading into the chapter house which measures 14m
x 8m and is located to the east with a dorter (dormitory) adjoining it to the
south. A kitchen and prominent 16th century chimney lie to the west of the
cloister. The aisleless church measuring 60m x 10m lay to the north and
fragments of the west porch, tower, nave and chancel remain upstanding. To
the south-west of the buildings is a large, roughly square, embanked pond
measuring about 75m across and 2m-3m deep, part of which still contains water.
West of the pond, on the opposite bank of the Grace Dieu Brook, are the
truncated earthworks of a further pond defining a roughly triangular area
extending for approximately 50m from the brook. Some 50m to the north of the
priory is a crescent-shaped fishpond measuring 55m x 20m and 1.5m deep
containing three islands. Beyond this is a large boundary ditch 10m wide and
over 2m deep containing an inner bank. Several sections of the boundary wall
of the priory, about 1m wide, are situated on the eastern bank of the Grace
Dieu Brook.

The Priory was founded between 1236 and 1242 by Roesia de Verdun. In 1377
there were 16 nuns and a hospital for 12 poor people, as yet unlocated. At
the Dissolution it was converted into a Tudor mansion by John Beaumont at
which time many hearths were added. Most of the buildings were pulled down by
Sir Ambrose Phillipps in 1696. Extensive ruins are shown on an engraving by
Buck of 1730. An archaeological survey, including some test pits, was carried
out by the Loughborough and District Archaeological Society in 1967.

The site today occupies a piece of land that was truncated on the south side
by the former Charnwood Forest Canal which was later itself partly overlaid by
the now disused Coalville-Loughborough railway.

A nunnery was a settlement built to sustain a community of religious women.
Its main buildings were constructed to provide facilities for worship,
accommodation and subsistence. The main elements are the church and domestic
buildings arranged around a cloister. This central enclosure may be
accompanied by an outer court and gatehouse, the whole bounded by a precinct
wall, earthworks or moat. Outside the enclosure, fishponds, mills, field
systems, stock enclosures and barns may occur. The earliest English nunneries
were founded in the seventh century AD but most of these had fallen out of use
by the ninth century. A small number of these were later refounded. The tenth
century witnessed the foundation of some new houses but the majority of
medieval nunneries were established from the late 11th century onwards.
Nunneries were established by most of the major religious orders of the time,
including the Benedictines, Cistercians, Augustinians, Franciscans and
Dominicans. It is known from documentary sources that at least 153 nunneries
existed in England, of which the precise locations of only around 100 sites
are known. Few sites have been examined in detail and as a rare and poorly
understood medieval monument type all examples exhibiting survival of
archaeological remains are worthy of protection.

The Priory at Grace Dieu is one of only two nunneries in Leicestershire. Its
buildings survive reasonably well and are accompanied by an extensive range of
earthworks and buried deposits. The surviving remains illustrate how it was
converted into a Tudor mansion after the Dissolution.