A Scheduled Monument in Whickham South and Sunniside, Gateshead 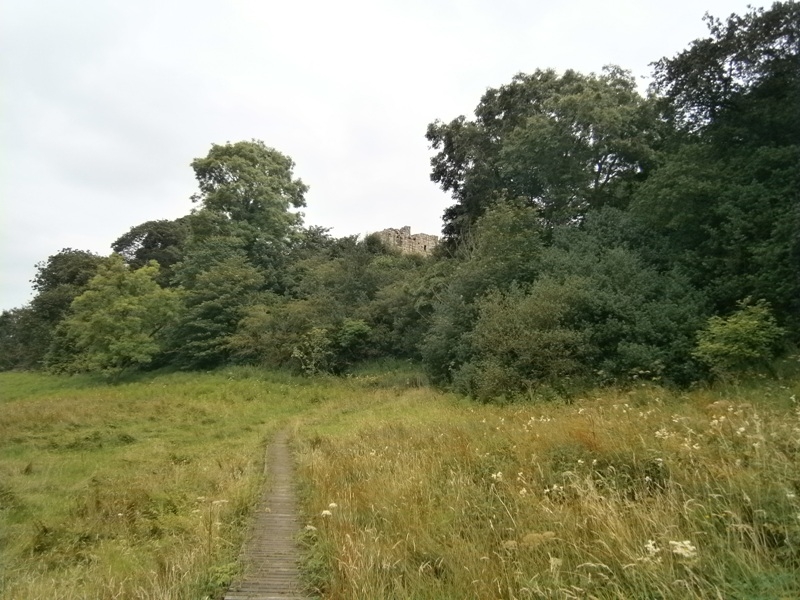 The monument includes the medieval fortified house, which is known as Old
Hollinside. It is situated on the crest of a north facing steep slope above
the Derwent valley and 150m south west of the modern farm of Hollinside.
The remains, the standing parts of which are Listed Grade I, include a ruined
fortified hall house, an attached wing to the north east and associated
earthworks. The hall house was constructed in several phases, dating from the
late 13th century to around 1400.
The hall house is orientated north east to south west along its long axis. It
is of sandstone construction, measures 16m by 11m with a turret in its western
corner. To the exterior, the majority of the walls stand to a height of 6m,
although on the south eastern elevation they survive to a height of
approximately 9m-10m. All four elevations are constructed of roughly coursed
sandstone blocks, with squared sandstone blocks above first floor level on the
south west and north west sides. There are a number of window openings on each
side and on the south west elevation two corbels at second floor level are
believed to have supported an oriel window. The main doorway into the hall is
on the south east side. It is set in a recess between two shallow projecting
wings which later was subdivided by a screen wall to form a lobby in front of
the original entrance. The space between the wings was roofed over by a spring
vault carrying a tower. Above the doorway there is a hollow, believed to have
carried a coat of arms stone.
Internally the house can be divided into five parts, the lobby, a hall, a
south wing, an east wing and the western turret. The walls have some plaster
on them and the remains of an inserted fireplace survive at first floor level.
The first floor of the house was carried on a set back running the length of
the north west wall and on beams that fitted into sockets, four of which
survive.
The north east wing of the house is an`L' shaped structure, which extends to
the north east and east. It is constructed of tabular sandstone blocks and its
eastern arm survives to a height of about 2m. The northern side of the wing is
not upstanding but survives as an earthwork with sections of walling evident
on its surface.
Earthworks can be seen to the north east, south east and south west of the
hall house, and additional earthworks are recorded on the first edition 1:2500
Ordnance Survey map and on tithe maps. The earthworks include a remnant field
boundary and two banks that correspond with a 35m square enclosure indicated
on the Ordnance Survey map to the south east of the hall. On the south east
side of this enclosure a gatehouse was shown measuring 20m by 10m, which was
the main access to the house. The gatehouse is depicted as a roofed structure
on tithe maps of 1767 and 1803. The 1767 tithe map also depicts an undefined
structure to the north east of the house, which is interpreted as a courtyard
and is included in the scheduling. The Ordnance Survey map shows earthwork
field boundaries and marks `foundations' in the area between Old Hollinside
and Hollinside Farm. A sample of this area is also included in the scheduling.
The first reference to the monument is in 1317 when Thomas de Hollinside
granted his manor of Hollinside to William de Boineton of Newcastle and
Isolda, his wife. The property was owned by the Hardings from the 15th century
until the 18th century, when it became part of the Gibside estate of the Bowes
family. The monument was consolidated in the mid-1970s and in the early 1980s.

Old Hollinside is a well-preserved example of a medieval fortified hall house
in a prominent position and will provide evidence on the evolution of
fortified medieval complexes. The monument has an association with a number of
well-known historical families.