A Scheduled Monument in Ryton, Crookhill and Stella, Gateshead 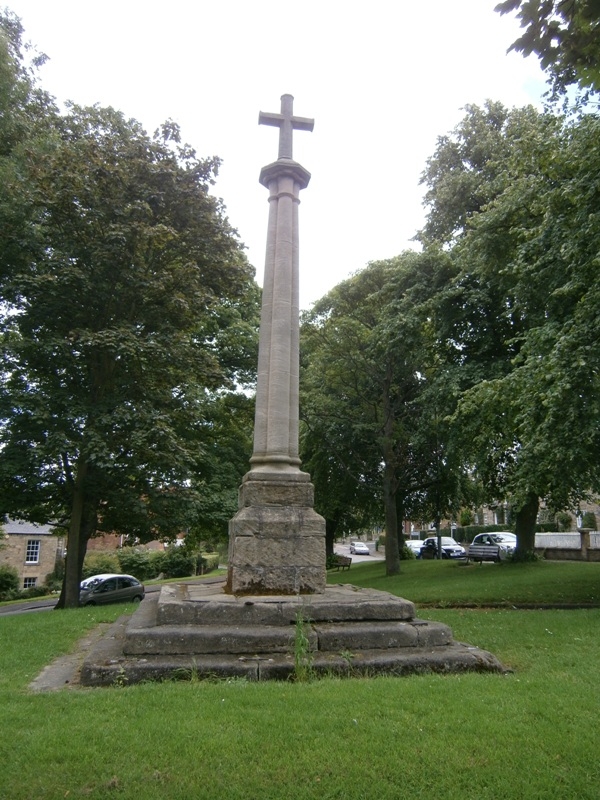 The monument includes Ryton village cross, which is situated on the village
green.
The cross, which is Listed Grade II, is constructed of sandstone and has a
three step base, box, shaft and cross head. The base is 3.9m by 3.9m at ground
level and 2.5m by 2.5m at the top. The steps have been strengthened by the
addition of iron cramps leaded into the steps. The top step stones are worn on
the inner side of their tops and some have been grooved to assist drainage.
The box is 1m by 1m and 1m high. It consists of three courses, each course
containing three 1m long ashlar stones. The courses are laid in alternate
directions. The top course is chamfered. The date stone is 0.72m by 0.72m and
0.25m tall. It has the date `1795' on its north and south face. On the east
and west faces there are inset plaques, the contents of which are not
discernible. The shaft is modern, about 5m tall and surmounted by a modern
1.5m cross with octagonal shaft and arms. The base of the shaft has the date
`1951' on its north and south face.
The cross head replaced in 1951 now stands in the grounds of Tyndale House,
Ryton and is not included in the scheduling. The shaft has not been located.
The cross and shaft are dated to 1795 and were erected by Thomas Chancer, a
well known mason in Ryton. Ryton cross was used for preaching by Charles
Wesley in October 1742 and by John Wesley in June 1757, which confirms the
existence of a cross prior to the erection of Thomas Chancer's 1795 cross. The
cross has been used as the focal point for the Ryton Hirings which were held
twice a year, in May and November.
The kerbed path where it falls within the protection margin of the cross is
excluded from the scheduling, although the ground beneath is included.

Ryton cross is believed to be the site of a cross prior to the 1795 cross of
Thomas Chancer. It is locally important as the focal point of the Ryton
Hirings and is associated with John and Charles Wesley, who preached here in
the eighteenth century.