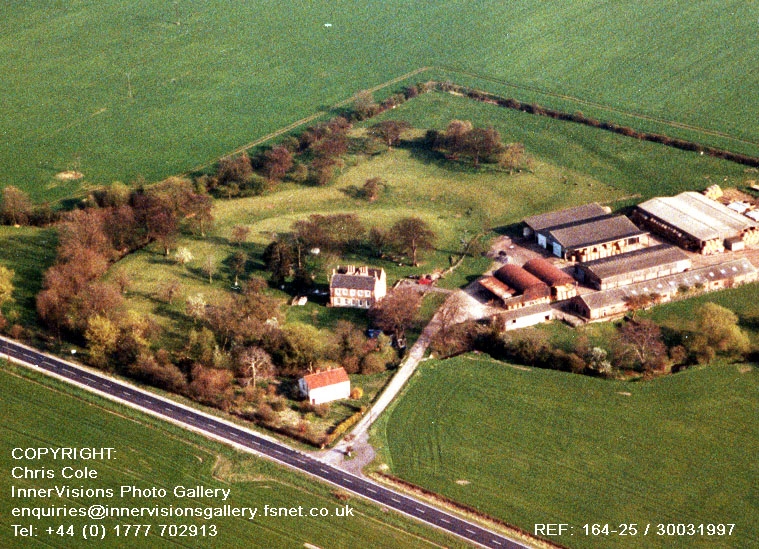 The monument includes the earthwork and buried remains of Kingshaugh Camp, a
ringwork which surrounds the 17th century Kingshaugh House. The house itself
is a Grade II Listed Building which tradition places on the site of a hunting
lodge founded by King John. Kingshaugh Farm also sits within the ringwork. The
monument is situated in a meander of a stream which forms the northern
boundary of the area of protection.
The earliest reference to `Kingeshag' is in pipe rolls dating to 1194 when it
is recorded that there was pasture worth ten shillings. In 1211, in the
accounts of Brian de Insula who was working for the king in the East Midlands,
there is a reference to the spending of five hundred and fifty pounds four
shillings and seven pence for building the king's houses and enclosing the
park. Further work was carried out in 1212 and 1214. There is also the first
reference of `Kingeshawe' being a castrum or fortified camp in 1214,
indicating that the earthworks were present by this date. A chapel was
recorded in 1215 and a thick wall within Kingshaugh House is said to be the
surviving remains of this. After this the property was given to various
knights who held it for the king but in state papers of 1604 it is recorded
that the manor left the king's demesne and was bought by Augustine Earl.
Artefacts, including large quantities of Iron Age and Roman date, have been
recovered from the site and its surrounding area. This suggests that the area
had been an important foci of settlement for some considerable time, beginning
long before the earliest written references to the site.
The monument survives as a series of earthworks and buried remains. In the
eastern half of the monument a sub-circular area, measuring approximately
120m in diameter, is defined on its south and east side by a bank and
external ditch or moat which survives to a depth of up to 3m. On the north
side the bank is degraded but still survives as a low, wide feature and
provides a fairly steep slope down to the north. The stream provides a natural
defence on the north, north east and north west sections of the monument. On
the western side of the moated area, the bank and ditch have been lost beneath
modern farm buildings.
To the south of the sub-circular area the defence of the monument was further
strengthened by a complex series of banks and ditches. On the south east side
a wide ditch is separated from the inner moat by a narrow corridor. This runs
in a southerly direction for approximately 40m before turning at right angles
and widening towards the west. A low bank flanks it on its southern side.
The wide ditch, to the south of the corridor and low bank, is `L' shaped with
the shorter stretch running north to south and the longer section running to
the west for the full width of the monument. On the western side of the moated
area the bank and ditch lie beneath modern farm buildings. Where small scale
excavations for service trenches or other building works have been carried out
within the farm yard significant archaeological deposits have been uncovered,
indicating the level of survival beneath the ground surface. The buried
remains include an infilled section of ditch.
The short section of the ditch is the widest but tapers to a point at its
northern end where it provides access to the corridor. At its widest point,
the ditch contains a high, well defined ovoid mound which appears to have
provided additional defence to the corridor.
To the south of the ditch are the degraded remains of another bank and outer
ditch. These are curved in plan and provide an almost mirror image of the
curve in the stream which defines the northern boundary of the monument. Both
the eastern and western ends of the bank and ditch have been truncated, at the
western end by a modern farm track and at the eastern end by a field drain.
This bank and ditch are very slight when compared to the other earthworks.
Kingshaugh House, the modern farm buildings, all modern fences, gates, track
surfaces and animal feeding troughs are excluded from the scheduling, although
the ground beneath these features is included.

The earthwork remains of the ringwork known as Kingshaugh Camp are rare,
particularly well preserved and retain significant archaeological deposits.
The deposits at the bottom of the ditches, the construction material of the
banks and the buried land surface beneath the banks will all contain important
artefactual and environmental evidence. The earthworks and the historical and
archaeological documentation combine to provide a clear picture of the
ringwork and its social and economic position in the wider medieval landscape.