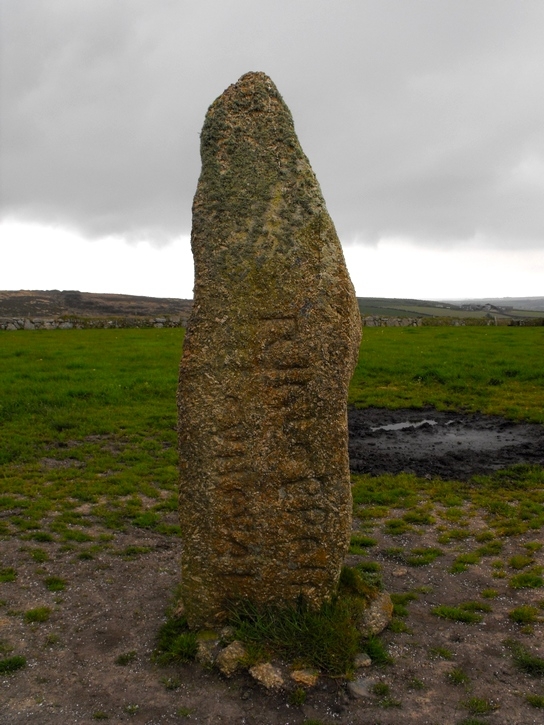 The monument includes an early Christian memorial stone, known as Men Scryfa,
situated on the northern side of the west Penwith uplands. The Men Scrytha or
`written stone', which is Listed Grade II, survives as an upright granite
shaft 1.73m high, with an incised inscription on the north principal face. The
stone measures 0.46m wide at the base widening to 0.5m at the centre tapering
to 0.26m at the top and is 0.3m thick. The inscription is incised deeply into
the stone and is clearly visible. The inscription is incised in two lines
running down the stone and has been read as `RIALOBRANI CVNOVALI'.
About 1.09m of the stone is buried including more letters of the inscription
which read as `FILI'. This translates as `the stone of Rialobranus, son of
Cunovalus'. Also above the second line of the inscription two crosses are
incised. From the style of the lettering and the form of the inscription it is
considered that this memorial stone dates from the sixth to eighth centuries
AD.
The Men Scryfa was recorded several times between 1700 to 1824 as being
recumbant. In 1825 it was re-erected, though in 1849 the stone was thrown down
as the landowner searched for treasure around its base. Around 1862 the stone
was re-erected. Measurements taken when the stone was lying down suggest that
1.09m is now buried. It has been suggested that this memorial stone may be a
reused standing stone as the early Christians often took over previously
venerated stones and marked them with crosses.

The Men Scryfa has survived well, and is a good example of an early medieval
memorial stone. It is believed to be in its original position though it has
been thrown down and re-erected in the past. The inscription is clearly
incised and complete. The inscription itself is of importance from a period
generally lacking in such historical references.