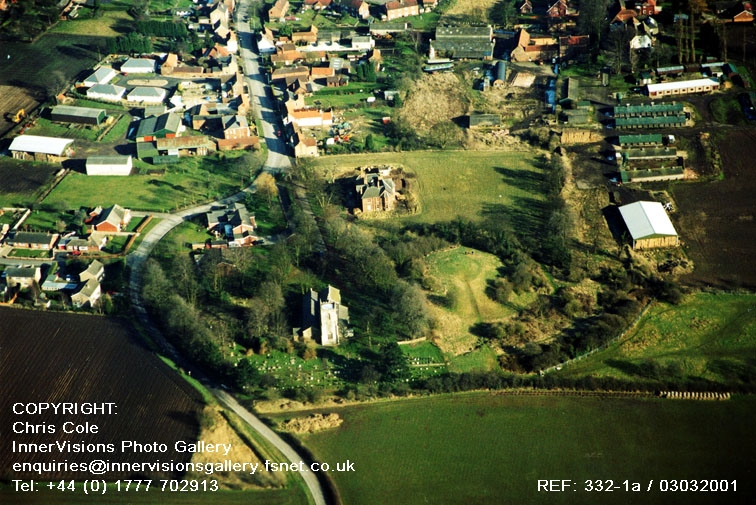 The monument includes part of the buried and earthwork remains of a Norman
earthwork castle located at the west end of Owston Ferry.
The settlement of Owston Ferry pre-dates the Norman Conquest. There is no
mention of a castle in the Domesday Book which records that the manor of
Owston Ferry was owned by Geoffrey de La Guerche. The castle is thought to
have been constructed shortly after the Domesday Book was compiled, in the
late 1080s, to control the traffic between Lindsey and the Isle of Axholme
across the River Trent. However, records suggest that it was partially
dismantled in 1095, in one of the years when William Rufus faced a revolt in
support of his brother's claim to the throne. In 1173-74 the castle was
re-fortified by Roger de Mowbray in rebellion against Henry II, but
surrendered to royal forces under the command of the king's son Geoffrey
Plantagenet, the bishop-elect of Lincoln in 1174. The castle, along with other
castles belonging to the Mowbrays, was then slighted to make it undefendable.
In the following century the church of St Martin's was constructed within the
bailey to the north of the motte.
Kinaird Castle is thought to have originally included a motte surrounded by a
moat ditch. To the north there were two baileys, the whole surrounded by a
bank and second external moat ditch. The motte is a conical mound 60m-70m in
diameter at the base, standing over 5m high from the bottom of the encircling
moat ditch. The top is a circular, level platform about 10m in diameter and
would have been the site of a tower, typically built of timber. The
surrounding inner moat ditch is on average 15m wide. On the north west side it
is infilled and lies beneath part of St Martin's Church and the original
churchyard. To the north of the motte there is a pair of baileys divided by a
marked break of slope that runs due north of the motte from the north side of
the original churchyard, with the modern ground surface of the eastern bailey
being approximately 1m below that of the western one. The eastern bailey
contains St Martin's Church and the churchyard which is divided into three
main areas. The original churchyard lies immediately around the church and
its ground surface now stands around 1m higher than the general lay of the
land. A later extension to the churchyard lies to the north, bound by the
road, and the most recent part, which is still actively receiving burials,
lies to the west. The eastern bailey now contains three houses with
outbuildings and gardens. Archaeological investigation in the north east
of this bailey in May 1995 showed that the remains of a sequence of two timber
palisades on the external bank survive buried under up to 1m of later
deposits. From the south side of both baileys, broad banks up to 2m high
extend to encircle the southern side of the motte and inner moat. These banks
do not join, but are divided from one another by a hollow due south of the
motte. The external moat around the castle is believed to have been filled in
when the castle was slighted in 1174. A slight depression marking its course
can be seen in the field to the east of the motte; the bank to its west also
shows as a clear soil and crop mark. The northern part of its circuit
co-coincides with the curving course of Church Street, which along this part
is slightly sunken. On the west side of the church, its course is continued by
a trackway running southwards and then by a footpath around the south western
side.
A number of features are excluded from the scheduling; these are all
buildings, road surfaces, telegraph poles, modern fencing and walling;
although the ground beneath these features is included. The churchyard of St
Martin's Church is totally excluded from the scheduling.

Kinaird Castle is a good example of motte and bailey castle with known
historical references. The archaeological watching brief in 1995 showed that
important remains survive protected under a thick blanket of later deposits.
The interiors of the baileys especially will contain additional archaeological
remains, including evidence of buildings and industrial and agricultural
activity, which will provide evidence for life in the Norman period. The
mainly infilled moat ditches will preserve environmental information as well
as evidence of the refortification and slighting of the castle in 1173-74. The
castle, built to control a crossing point on the Trent, will also preserve
evidence of medieval trading activity.