Round barrow on Dunsley Moor, known as Swarth Howe 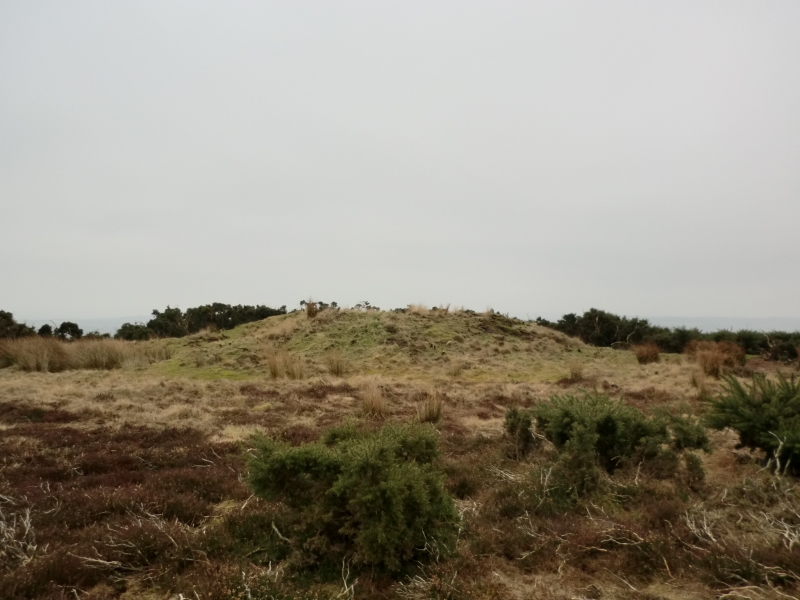 The monument includes a round barrow situated in a prominent position on the
north edge of the North York Moors.
The barrow has an earth and stone mound which stands up to 2m high and has a
maximum diameter of 25m. The barrow was originally surrounded by a kerb of
stones which defined the barrow and supported the mound. However, over the
years many of these stones have been taken away or buried by soil slipping off
the mound. In the centre of the mound there is a hollow, the result of the
partial excavation of the barrow in 1852 by S Anderson. He discovered a cist
burial consisting of stone slabs set vertically into a rectangular shape
around a cremation and covered with a further stone positioned horizontally.
He also found two other cremations, an inhumation burial as well as two jet
ornaments and a bone pin.
The barrow is one in a line of three (the others are the subject of separate
schedulings) and lies in an area rich in prehistoric monuments including
further barrows.

Despite limited disturbance the round barrow on Dunsley Moor, known as Swarth
Howe has survived well. Significant information about the original form of the
barrow and the burials placed within it will be preserved. Evidence for
earlier land use will also survive beneath the barrow mound.
Together with other burial monuments in the area, this barrow is thought to
represent a territorial marker. Similar monument groups are known across the
west and central areas of the North York Moors and provide valuable insight
into burial practice and land division for social and ritual purposes.