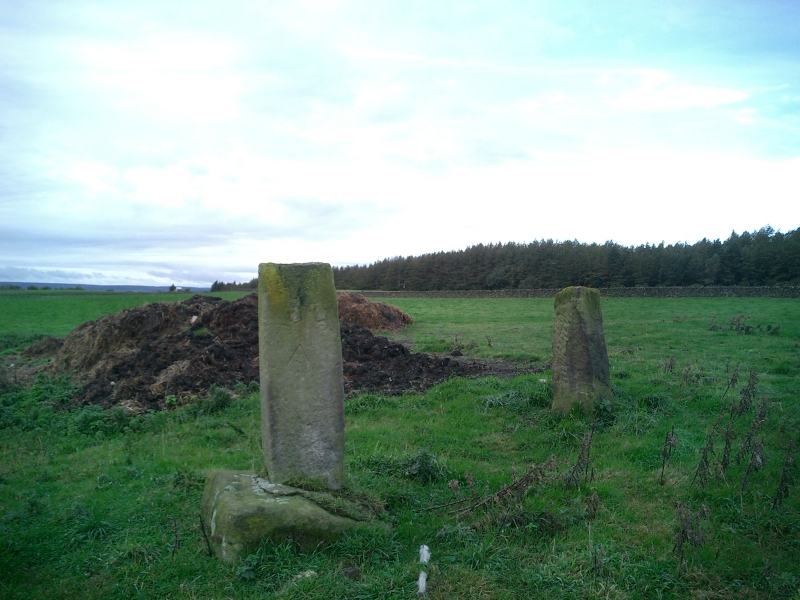 The monument includes a wayside cross known as Swarth Howe Cross, situated 30m
south of the A171 and 500m north east of Moorcock. The cross also serves as a
boundary marker for the parish of Aislaby.

The Swarth Howe Cross survives as a massive stone base of coarse yellow
sandstone 1.1m wide and 0.97m deep, crumbling away on the north side. The base
is 0.72m high and rests on a low pile of stones set into the turf. The shaft
is not original but a roughly squared block of sandstone set into the base
socket at an angle and fixed in place with concrete. The angle compensates for
the way the base has tipped back towards the south and brings the shaft
upright. The shaft is 0.47m wide and 0.38m deep with the wide faces to the
north and south. It is 1.27m high.

On the south face are the carved letters GR for Guisborough; on the east face
A for Aislaby; on the west face is the letter I and the dates of the boundary
perambulations 1752, 1774, 1799, 1821, 1841 and 1858. On the north face is
written `Egton Road'. In the top of the shaft a hole has been drilled 0.04m
wide and 0.11m deep as if to take a peg of steel and a further section of a
shaft which is now missing. On the north face there are two holes for a gate
fastening.

The cross marks a hollow way or old track from Egton, over Kempstone Rigg,
towards Hutton Mulgrave. The shaft has replaced an Anglo-Saxon carved cross
shaft now lost. It was in place when the parish system was laid out and was
used to mark a boundary for the parish of Aislaby. The later shaft confirms
both the functions of the original as waymarker and as boundary cross. We must
conclude that the cross, which is Listed Grade II, is in its original
position.

The gatepost on the north side of the monument is excluded from the scheduling
but the ground beneath it is included.

Swarth Howe Cross survives well as a base for an important Anglo-Saxon wayside
cross and later boundary marker. Despite the loss of its original shaft the
new shaft is of considerable interest as a record of the 18th century
perambulations and as a waymarker among a series of such monuments on the
upland routes of the North York Moors.